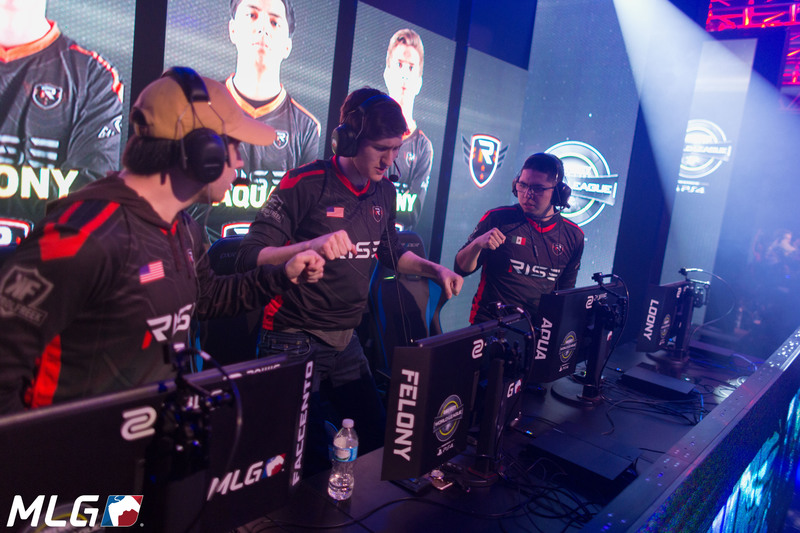 The first day of the $1.5 million Call of Duty World League Championship has concluded and we have already seen plenty of great plays, failures, and drama.

Here are five of the biggest storylines from day one of CoD Champs 2017.

Rise Nation were impressive in the early events of Infinite Warfare, but the team’s recent struggles to crack the top eight in the world made some fans question how good they really were.

That debate has been put to rest by Rise’s shocking and dominating performance against Luminosity Gaming, arguably the best team in the world. In a 3-0 sweep, Rise throttled the CWL Anaheim champions in the Search and Destroy and Uplink games.

Although LG narrowly lost on Breakout Hardpoint, Rise asserted supremacy on Crusher Search and Destroy, winning 6-2. Things just got worse from there on Precinct Uplink as Rise didn’t let up at all and kept rallying score after score. By halftime, LG found themselves down 15-2. Despite getting some more points in the second half, Luminosity was blown out as Rise triumphed 22-9.

After a horrendous showing in Stage Two of the CWL Global Pro League, Elevate bounced back Wednesday at CoD Champs. Elevate’s 0-18 map count in GPL group play made them the butt of jokes around the CoD community, but the team seemingly used it as motivation.

In their first match of the event, Elevate took down Projekt Evil 3-1—and Jordan “Reedy” Reed told fans to “doubt us now.”

Reedy and his team will have a chance to make it into the championship bracket tomorrow as they face Mindfreak Black for second place in Group B.

After Evil Geniuses released Jeremy “StuDyy” Astacio in June to sign Christopher “Parasite” Duarte, StuDyy made it his mission to take down his former team. He got his shot Wednesday as his new team, Str8 Rippin, battled EG in their first Group F match of the CWL Championship.

Str8 cruised to a rather easy victory on Retaliation Hardpoint in the first game of the series behind a great slaying performance from Richard “Ricky” Stacy. Str8 then won 6-5 on Throwback Search and Destroy with three of their players earning over eight kills. After losing in their best game mode, EG were routed on Frost Uplink 13-1.

StuDyy was very active in trash talking his former teammates after each game, but StuDyy’s newest teammate, Donny “Temp” Laroda, likes to talk trash just as much as he does.

OpTic Gaming and eUnited sweep through the first day

Stage Two champions OpTic had a fairly easy time on the opening day of the CWL Championship. Sweeping both 3sUP and Epsilon Esports must make the Green Wall think that this might finally be the year that OpTic bring home a world championship.

This looks even more likely with the way Matthew “FormaL” Piper played on day one, as the Stage Two MVP broke out in their final game and killed about everything that moved. He finished Precinct Uplink with 43 kills, the most in a CWL pro match on that map this year, according to analyst Rondez “Fox” Green.

OpTic weren’t the only team to breeze through their first two matches, however, as eUnited swept both Mindfreak and Lethal Gaming. Although the series count ended 3-0, things got a little dicy for eUnited against Lethal.

Preston “Prestinni” Sanderson got a little jumpy on Throwback Search and Destroy, but thankfully, Lethal’s Robert “JuJu” Lamkin was just a tad more nervous. The combination of the two resulted in possibly the worst one-on-one in Call of Duty history.

Two top European teams didn’t have the cakewalks that OpTic and eUnited did, but they still both ended up with victories in their respective groups.

Splyce’s struggles of late continued in Hardpoint as they dropped both of the HP maps against Team Kaliber by a combined 176 points. Fortunately, they played well in the Search and Destroy and Uplink games to topple TK in the five-game series.

Fnatic’s problems couldn’t be pinpointed to one specific area as the team lost both a Hardpoint map and an uncharacteristic Search and Destroy game. Similarly to Splyce, however, the Brits were able to clutch up in the 10th round of game five and take the series over a surprising Tainted Minds squad.

Play will continue at the Call of Duty World League Championship at 10am ET on Thursday, as Fnatic and Evil Geniuses kick off the action in a very important match—one that will likely decide who moves on to the championship bracket.

Other matches to watch out for on day two include Elevate vs. Mindfreak Black, FaZe Clan vs. Red Reserve, and Splyce vs. Ghost Gaming—and all of the action resumes at 10am ET on Aug. 10.