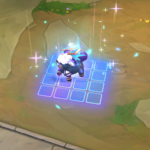 Riot Games revealed several K/DA-themed Little Legends today that will release at the end of October in Teamfight Tactics.

An official comeback from K/DA has inspired several new personalizations in TFT that will launch on Oct. 29. The virtual pop group already revealed their debut track, “THE BADDEST,” with their EP ALL OUT set to release on Nov. 6. Hype for the release has carried over into TFT with new Little Legends variations for Feathernight, Hushtail, Squink, Furyhorn, and Lightcharger.

All five Little Legends are available with two variants, one inspired by K/DA’s original skins and the other from the new ALL OUT skins. Individual one-star versions can be purchased in the TFT store for 925 Riot Points. Players can also opt to roll-the-dice with a K/DA Little Legends egg, priced at 490 RP.

The K/DA-inspired skins are also carrying over into League and Legends of Runeterra via skins and an ALL OUT pass in LoR. Little Legends in TFT with the K/DA variants are scheduled to release on Oct. 29.