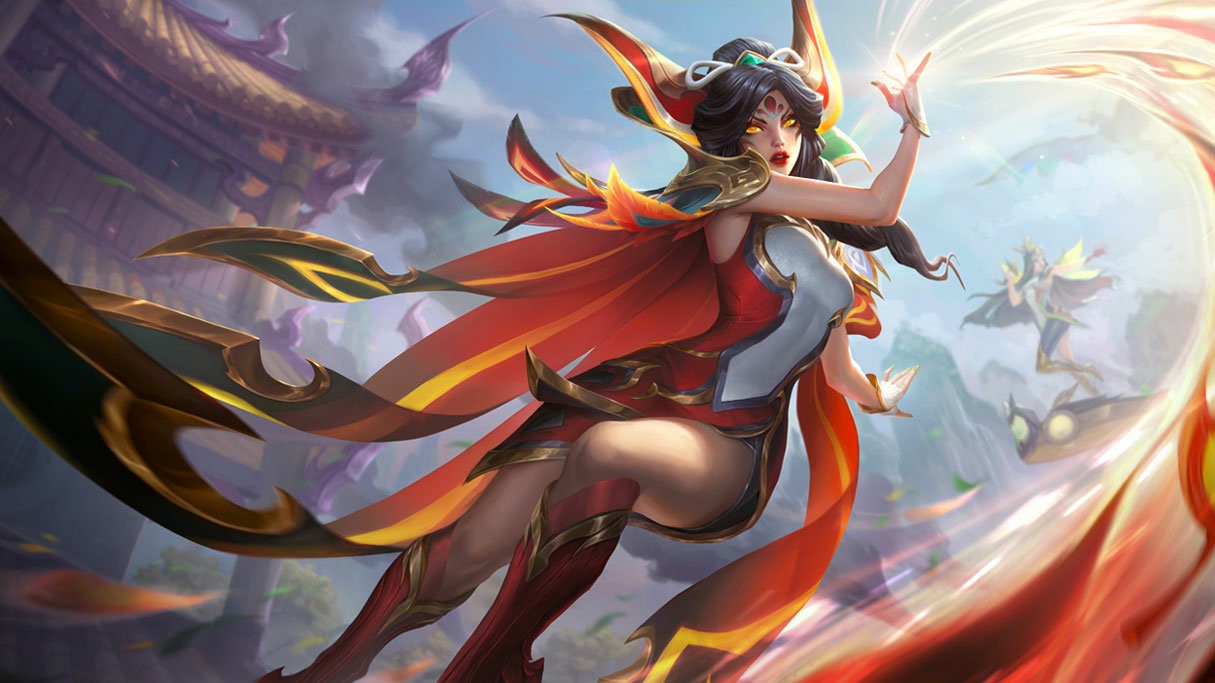 Teamfight Tactics Set Seven Dragonlands brought a new version of the Rebel to Convergence, this time with the Ragewing and Swiftshot traits. She’s a four-cost unit with great capacities to be the main carry of your compositions.

Xayah’s Feathers FLY ability causes her attacks to launch feathers at her target and nearby enemies for four seconds. The feathers remain behind her targets until the end of the duration when Xayah recalls her feathers dealing damage to all enemies they pass through. At three stars, twice as many enemies near the main target of Xayah’s attack are hit by additional feathers.

The TFT Set Seven champion also has two traits. Ragewing changes the way mana works innately, being converted into rage that is generated only from attacks and not from taking damage. After a Ragewing unit uses its ability, it becomes enraged for four seconds, during which time the unit gains 30 percent attack speed and can no longer generate rage. Activating the Ragewing trait also grants attack speed and omnivamp while your champions are enraged.

All champions with the Swiftshot trait innately gain two hex attack ranges. Additionally, Swiftshots gain attack speed for every hex between themselves and their targets when the trait is activated.

How to know when to play Xayah in TFT Set Seven

TFT Set Seven compositions with Xayah as the main carry are versatile in their main traits. One of the most important factors is getting the right items to increase Xayah’s attack speed, allowing you to build up rage faster and thus use her ability more often. The Rebel may also appear in other compositions to complete a pair of Swiftshots.

One of the main points in deciding to use Xayah as a main carry is to get strong items for her and find her units as soon as possible. Since it is not necessary to get Xayah with three stars, it is possible to stay in the top four even with more than one player looking for Xayah.

At least one Guinsoo’s Rageblade is required and Augments like Press the Attack can make a big difference to Xayah’s performance. The units that are found more easily in the early stages of the game can be an indication of which of the compositions to choose. A two-star Ezreal with a Stattik Shiv equipped can make a winning streak to create an economy to level up early to find a Xayah. Many available Ragewing units can indicate a complete Ragewing composition. While Guild units can indicate a composition with its benefits for Xayah and in this case the best Guilds are Sejuani to pair with Hecarim, Twitch with Xayah, and Talon with Qiyana.

Ragewing is one of the TFT Set Seven trait used in the composition of Xayah carry. At least three Ragewing champions must be present, in addition to the composition that utilizes all champions of this trait. That way Xayah can receive as much attack speed and omnivamp as possible without sacrificing other helpful effects. Shyvana is an important addition in the later stages of the game to the comp with all Ragewings, as she counts three times for the trait. Hecarim and Shen are the best units to accompany Xayah when doing the other comps. Both work as a front line with tools to disrupt enemies, buying time for Xayah to accumulate more attack speed and feathers on the field.

Switshot is an equally important trait when using Xayah as your main carry as its activation greatly increases your attack speed. Most of the time it is necessary to have at least one other Swiftshot to activate the trait. It is possible to use four Swiftshots but you will need good items for the frontline.

Guild is a very effective trait that can be used to improve Xayah’s stats. With the trait bonus, Sejuani can increase the health of the entire board, Twitch increases attack speed while Talon increases attack damage. This team together with two Bruisers forms a very complete board.

Considering Shen and Hecarim as part of Xayah’s frontline, it’s simple to activate the Bruiser and Cavalier traits to increase the board’s defensive capabilities.

Finally, Shimmerscale is a trait that can be very beneficial for granting a Shimmerscale item. To do this, just add the dragon Idas as the main frontline, while the other champions protect Xayah in the back line. Draven’s Ax and Gambler’s Blade are the items you will want for Xayah. If the Shimmerscale item in the game is different, it may be better to exchange Idas for other units.

When using Xayah as the main carry of your TFT Set Seven comp, the items she uses will be very important as well as what other traits are active. Draconic Augments play an important role during all phases of a game. The best Augments for Xayah TFT compositions is Press the Attack. Scorch if using full Ragewing vertical composition, otherwise Stand Unite, as there should be multiple active traits on the board. Loot Master and other Augments related to the Guild trait if using composition with Guilds.

Press the Attack causes Swiftshot champions’ attacks to apply a stack to their target for five seconds. Each third stack consumes all others and deals true damage equal to five percent of the target’s maximum Health. In addition to granting a Twitch. This is an extremely powerful Augment to take on enemy frontlines.

Scorch works well with Ragewings composition, with it, every fifth instance of damage from a Ragewing champion deals 33 percent more damage and is converted to true damage. Again, converting some damage to true damage can be devastating against enemies with powerful frontlines.

Stand Unite grants board-wide attack damage and ability power for each active trait on it. Many Xayah comps are versatile and make use of many different traits. It’s just not a good choice for composition focused on a single trait.

Loot Master delivers a random item component every four combat rounds if the board has at least two Guild champions. Also grants a Twitch. With this Augment it is faster to acquire the best items for Xayah and the frontline. Especially effective in composition that uses Guilds, such as Guild Heart, Crest, or Crown, as a Guild emblem allows you to add the omnivamp effect to your board.

Other options are Celestial Blessing for extra healing and Best Friends for easily arranging the board to pair champions adjacent to each other, thus increasing their attack speed and armor. Portable Forge is also a solid choice due to the increased power level you get from an Ornn Artifact.

The three main TFT Set Seven items to equip Xayah are Guinsoo’s Rageblade, Giant Slayer, and Quicksilver. Guinsoo’s Rageblade is important for increasing attack speed, allowing Xayah to build up rage faster to use her ability more often in battle dealing large amounts of AoE damage. Giant Slayer makes abilities and attacks do more damage, with double the damage bonus if the target has a lot of max health, so Xayah’s attacks are more powerful against tanks. Quicksilver is the default item to protect your main carry from crowd control but can be replaced with other attack or crit speed items if there is an Augment like Verdant Veil in play.

Hecarim is a good candidate to equip with defensive items and your best options are Warmog’s Armor, Gargoyle Stoneplate, and Sunfire Cape. Try to position it closer to the center of the board to attract more enemies. Morellonomicon is a very effective item when equipped on Shyvana in the later stages of the game, dealing true damage and decreasing the opposing team’s healing. Other possible carries to equip are Talon or the second Swiftshot unit. Talon makes good use of items like Infinity Edge and Bloodthirster.

Carousel priority for Xayah TFT compositions is Recurve Bow, B.F. Sword and Sparring Gloves. This will make it easier to build the best items for Xayah. Gold Collector is Ornn’s best item for Xayah.