The streaming industry has shown continuous growth over the last year, setting new records each quarter. Twitch has led the pack with three straight quarters of record-breaking performance for hours watched and streamed.

Per platform, Twitch reached another all-time high for the third quarter in a row with 6.51 billion hours watched, up from 6.337 billion hours in the previous quarter. Viewership on the biggest streaming platform has increased 27 percent year-over-year.

Q2 saw both the total number of hours and unique channels streaming drop by an average of 8.5 percent, though both are still up double-digit percentages from the same time frame in 2020. 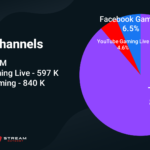 The number of unique channels and average concurrent viewership on YouTube Gaming also decreased by 10.2 percent and 5.5 percent respectively from Q1 to Q2.

Facebook Gaming saw its total hours watched and average concurrent viewership rise as well, while the number of unique channels streaming on the platform dipped massively, going from 1.5 million to just over 840,000 in Q2. 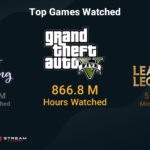 And for esports, Riot Games dominated with the League of Legends MSI 2021 pulling in just under 60 million hours watched, followed by VALORANT Masters at 23.9 million and the WePlay Esports Dota 2 AniMajor at 22.7 million.