“When I found out that it said a serious earthquake is happening and you should find a shelter nearby, it was really alarming.” 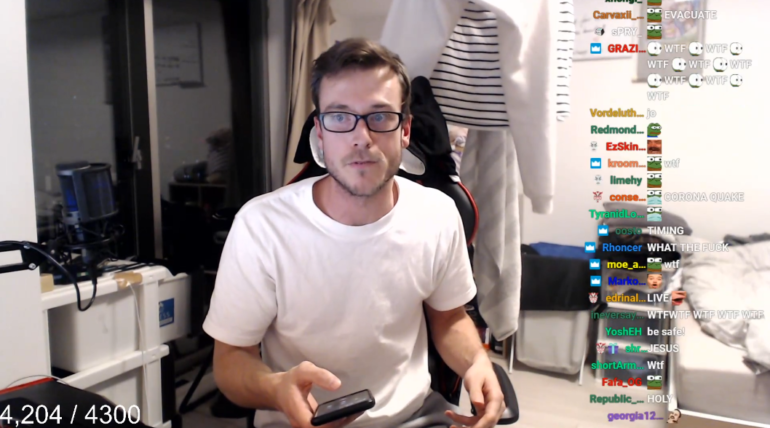 A scary moment occurred for streamer Jake’n’Bake while he broadcasted on Twitch today, sending him and his viewers into a panic.

While talking with his audience about the coronavirus, Jake’n’Bake’s phone started to send off an alert. The streamer didn’t know what was going on and reached down to his phone to find the alert was for an earthquake in his area.

His chat went into a frenzy telling the streamer to evacuate and find shelter.

He then turned his camera to full screen and viewers could see it shaking while Jake’n’Bake tried to process what was happening around him.

A magnitude 5.5 earthquake occurred in Japan, where Jake’n’Bake lives. It also impacted Russia.

Just like phone carriers in the U.S., Japan uses an alert system that notifies users of natural disasters happening in their area. The Earthquake Early Warning alerts are issued by the Japan Meteorological Agency with information on what to do.

“I’ve never had an alert on my phone for an earthquake,” he said.

The earthquake didn’t damage his home since it’s an earthquake-proof building. Jake’n’Bake ended up being fine and he went on to continue his stream. But it definitely brought a shock to the streamer and viewers on what can take place when the stream goes live.

“It was definitely scary, but once I felt the shake calm down, I could feel it wasn’t too big,” Jake’n’Bake told Dot Esports. “And I just hoped there wasn’t going to keep going or a stronger one would follow. “

He said that because he was streaming, a lot was going through his mind during the incident. It became alarming when he saw the alert said it was a serious earthquake and to seek shelter.

“I heard a neighbor open their door in my apartment complex, but things seemed to calm down so I calmed down as well,” he said. “I am from [Los Angeles] so I grew up with earthquakes so I maybe didn’t get as startled as some.”

Having an earthquake break out while streaming isn’t what everyone hopes to experience, but Jake’n’Bake said it was better than the alternative.

“I think experiencing things together is really what makes livestreaming special (within reason),” he said. “It was nice to have people around—better than being alone.”