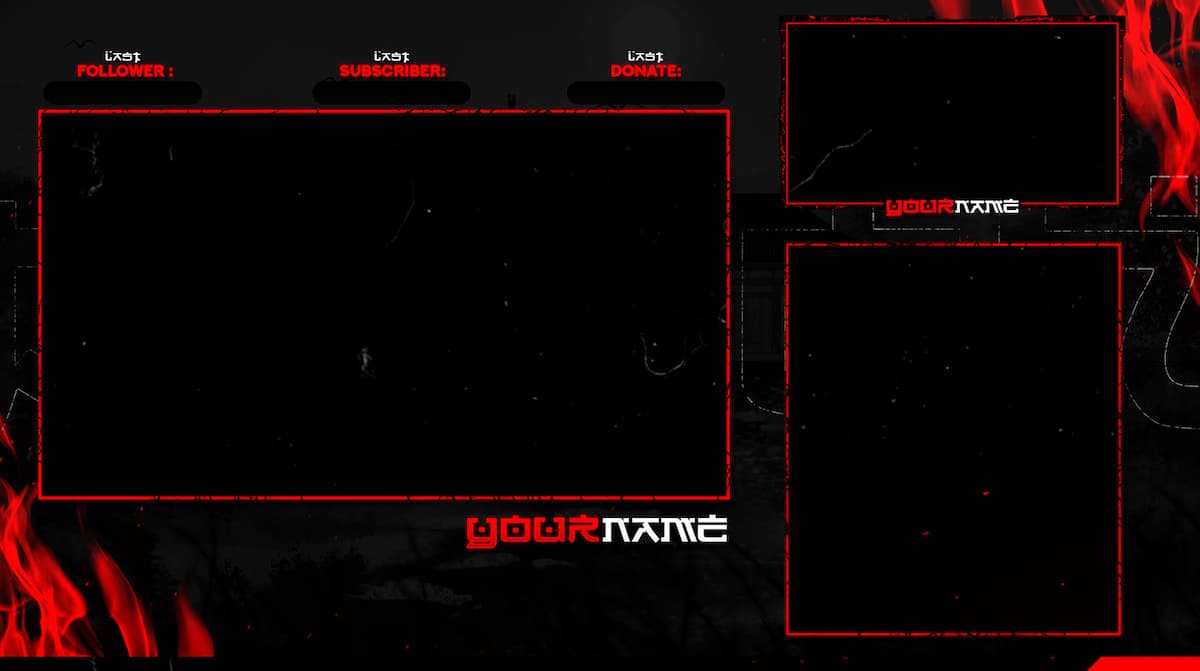 It is important to have a good overlay when streaming on Twitch. Many sites make custom Twitch overlays or sell premium overlays at a high price. If you look around, it’s possible to find free overlays that work just as well as any premium version. Free versions are the same as premium ones and don’t require much graphic design experience.

One disadvantage of the free versions is that anyone can copy your overlay, and they will never be uniquely yours. It’s fine not to have a unique overlay if your focus is on the overall appeal rather than being completely original.

To help you boost that appeal, we’ve collected some of the best free overlays you can use on Twitch today.

There is no name for this Twitch overlay, but don’t let that fool you: it’s still a great streaming overlay. The template isn’t as easily customizable as others on this list, but it comes with everything you need to run an efficient stream. This overlay has a friendly and upbeat vibe, similar to Pokimane or Valkyrae. This overlay is a solid choice, even if it primarily uses purple colors.

Rize, a Twitch overlay designer, created the Twitch overlay. His Behance page has several Twitch overlays. Many of the graphic designs he exhibits on Behance have a manga aesthetic, and even his free stream template follows this trend.

Impact Overlay is the kind of overlay you would think of when you think of free overlays. Although it isn’t flashy, it is sufficient for the job. What makes this overlay special is the company that provides it. The Think Premade website provides multiple tutorials and files you can use to modify and edit this overlay.

Despite looking basic, you can easily make it more appealing with minimal effort.

A stream overlay and webcam are included in the pack, with top and bottom overlay orientations. It comes in different colors, and with Photoshop files, so you can edit it quickly, even without tutorials. Regardless of what software you use, the overlay includes paint files so you can add text to it even if you don’t have photoshop.

Adobe Spark has a feature that allows you to make your own Twitch overlay, but if you click one of the templates already there, most of the work is done for you. You can also use it for other graphical purposes, which is where the overlay comes in. It can be tailored to match the look you’re going for.

You can make a few changes to the design with Adobe Spark, which is incredibly easy. You need a good computer and high-speed internet for something like this since loading the file takes a while. You can pick one of the templates, add the text you want to it, and then download it just like any other overlay.

When you’ve downloaded your assets, load them in as you would any template.

Division looks great and gives the feel of a streamer who isn’t trying to bombard you with all of their Social Media and advertisements. Division is a free Twitch overlay provided by Zerging. As you need to select Division Orange or Division Yellow, we have set the link to the page with Division on top.

The best part is you don’t need to choose between one overlay or the other because you can have both. Zerging encourages users to mix and match parts of various overlays and panels. They also offer complete packs, including many parts. You can use them in whole or in part in your stream, according to how you see fit.

AMP a Twitch Overlay Pack looks professionally designed and comes with tutorials and multiple overlays and features. You can also customize this font to make it more of your own. The site allows you to download the font and customize many of its features.

Although this is technically free, the site encourages you to support the creator. They have a Name a Fair Price option, which can always just be zero.

The Overlay includes all of the screens you need, but you can add your own text and change the backgrounds. There are 22 description panels, an avatar, three label bars, a banner, and two different webcam overlays included in this download.

Camo comes from a very respected website for Twitch streamers. Twitch Overlay has been the premier overlay site since 2014. You can use over 150 overlay templates, alerts, panels, and stream starting and BRB screens on Twitch, YouTube Gaming, and Facebook when using OBS, Streamlabs, and Stream Elements.

Camo is a Twitch overlay whose fonts and colors are typical of Call of Duty. Due to the military’s influence on the FPS genre, this will immediately be popular with streamers.

Camo includes Social strips, Social icons, and Webcam overlays. It has all the expected screens but also allows you to modify them. Camo uses Photoshop PSD, so you can add your own text and social information.

Nexus is the top free downloaded overlay in the Kudos.tv shop. The Nexus gives the feeling of being in a futuristic science experience because everything simultaneously looks efficient and exciting. The animation is smooth, and the purple color is soothing. There is a splash animation that matches the celebratory nature of donations and such when you get notifications. This is a program you won’t regret downloading if your CPU is capable of handling animated overlays.

The Nexus overlay is completely free, and Kudos does not mind that their most downloaded overlay does not make them any money, so it may remain free for a long time. It includes all of the essential features, such as Stream Screens, Overlays, Stinger Transitions, Alerts, etc.

It works great with Twitch, YouTube, and Facebook Gaming and on OBS, XSplit, and many other streaming devices.

This is another Twitch overlay from Behance with no name. If you want a professional-looking Twitch overlay, Behance is a great place to visit, and many of them are animated well. Free Animated Stream Overlay is an animated overlay that lets users choose from orange or purple, and you only have to give the creator credit in your video description.

This is one of the best free overlays because it is not just a regular animated sequence repeated. The transition animation rivals that of a professional streamer. Moreover, the background animations are interesting to look at, so people may keep coming back to your site even if you set it to Be Right Back. Furthermore, it has the Starting Soon, webcam, Live chat, Be Right Back, and Stream Ending overlays.

The only disadvantage of this overlay is it is very CPU intensive, so you may encounter problems if your computer isn’t powerful enough to run it.

The Gaming Red Stream Overlay PACK overlay from Behance is one of the best on this list. Although the overlay may seem a little basic, it is meant to look like a Twitch streamer’s overlay. It’s professional-looking even if it isn’t over the top, and most people would assume you’re a partner if you used this overlay.

If you’re new to overlays and want something that’ll make you look like you know what you’re doing without being overly complicated, this overlay is for you. This overlay comes with all of the screens you need with a red-themed Twitch overlay. To get this, you’ll have to join the Discord of the creator, but otherwise, it’s free to add to your Twitch overlays.

Free Twitch stream pack is pretty dark and brutal for a Twitch overlay, so be sure your audience will like this. The overlay has strong vibes of art created by Linkin Park’s Mike Shinoda and was inspired by samurai from the feudal period. The download comes with all of the streaming overlays you need, so it is a complete package.

If you are streaming Ghost of Tsushima or are planning on streaming the sequel, you should use this overlay to maintain the feel and make you stand out from all the other streamers.

There are plenty of free Twitch overlays available, but Free Stream Package is probably the best. All the features you will need are included, and the design makes it seem like it was made just for you. Any streaming computer can run it without needing a powerful CPU or RAM,

The creator will let you have it only if you do a few things.

Like the project, follow them on Behance, leave a comment, and send them a message. Since the entire package is free, it’s not much to ask.