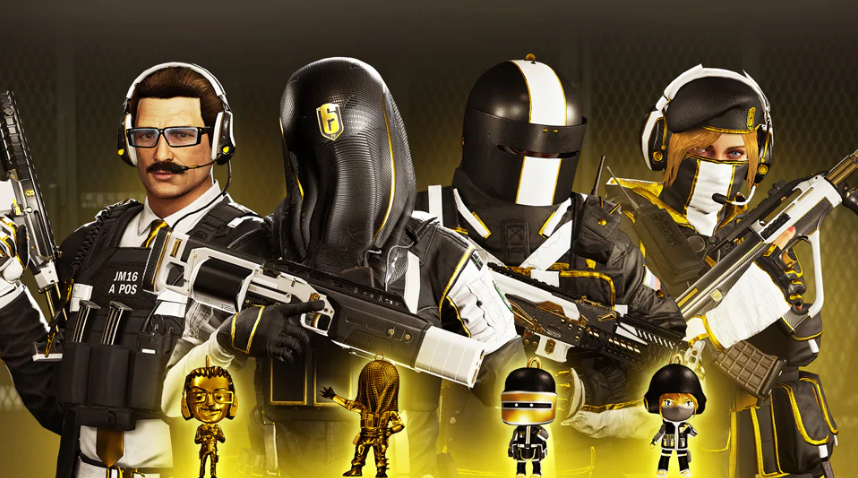 Ubisoft released the all-new Rainbow Six Siege Pro League Sets today and the prayers of Tachanka fans have finally been answered with this newest wave.

Pro League Sets are released every season and typically feature the two operators released in the previous season—in this case, Operation Phantom Sight—as well as two other operators from the main game. Proceeds from the Pro League Sets are shared with teams who were accepted into the Pilot Program Phase Two per the revenue sharing program. It’s a solid way to pick up some great cosmetics while supporting the growth and stability of the Pro League.

Tachanka, popularly known as “The Lord,” is an odd operator. The beloved Russian operator has little use outside of quality memes and stationary LMG clips, but that didn’t stop Ubisoft from giving him a Pro League Set of his own. Now, Tachanka fans can drape “The Lord” in the traditional Pro League black, gold, and white before preparing to fire that utterly-useless mounted gun. It does seem like a bit of a missed opportunity here considering that there’s no gadget skin for his LMG.

Warden also got a Pro League Set for being released alongside Operation Phantom Sight. The operator sees little to no use and with good reason. Warden’s gadget sounds great on paper but is extremely situational and Ubisoft hasn’t quite figured out how to make him a viable pick. He still gets to rock a Pro League Set, though. Warden’s set is unsurprisingly the dullest given that there’s only so much the designers can do to spice up a suit and tie. Giving Warden a golden mustache would’ve been a hilarious off-brand choice.

Along with the Tachanka and Warden sets, fans will be pleased to see IQ finally receive her Pro League Set. But players may also be a bit upset with the placement of the white on IQ’s face mask since it highlights the middle of her face perfectly for enemy players.

Finally, Nøkk will be getting her creep on a little less stealthily with her Pro League Set. The skin looks great aside from having a giant golden Rainbow Six logo plastered right at the crown of her head hitbox. Still, it’s definitely not the worst use of the Pro League colors, especially when compared to the bland set given to Warden.

The Pro League Sets are a great way to support the league and the teams participating in the Pilot Program. Without this type of revenue sharing program, it’s hard to see how the esport would continue to appeal to organizations, especially ones that are having a rough time in the regular season of the Pro League.

Fans can pick up each set individually or as a package deal for a heavily-discounted price. Each set costs $7.99 on its own, but grabbing all four sets only costs $15.99.