Though crossplay used to be a feature reserved for only a few games, it’s getting more popular by the day. Fortnite, Call of Duty: Black Ops Cold War, and Rocket League are the prime examples that feature crossplay. Not only is crossplay useful for playing with friends playing from different devices than yours, but it’s also a nice-to-have feature if you frequently swap between a console and your gaming PC.

It’s been one of the more demanded features for Rainbow Six Siege as well, but there has been little to no progress regarding the matter for a couple of years now. The community got hyped over the news from Ubisoft while the developer was getting ready to transition over to the next generation of consoles, but the features revealed weren’t enough to quench the thirst of players who were looking to take their Siege experience to the next level.

The answer to this question is yes, but there’s a twist. Siege’s crossplay feature isn’t quite similar to what gamers have been accustomed to. While Ubisoft offers a free-of-charge upgrade for all the Siege owners looking to move on to the next generation of consoles, the crossplay feature will also be limited to players playing from the same family of consoles.

This applies to Xbox users as well. Xbox One Series X or S owners will be able to squad up or play against users from Xbox One, but they won’t be able to get into lobbies with players from PlayStation or PC.

Ubisoft also mentioned a cross-progression system to allow players to move onto the next generations of consoles without losing any of their precious cosmetics and progression. You won’t be able to carry over your progress if you’re switching from PlayStation to Xbox or vice versa, however. Moving over to PC from any of the console platforms is also not possible, making the feature slightly limiting.

How to enable crossplay in Rainbow Six Siege?

Siege’s port for the newer generation of consoles is scheduled to go live on Dec. 1 alongside the long-anticipated Y5S4 patch, Operation Neon Dawn.

You’ll need to link your Siege progression with Ubisoft Connect to activate crossplay between PS4/PS5 and Xbox Series XlS/Xbox One. Note that players from PlayStation and Xbox won’t be able to play with each other, and only players from the same family of consoles will have access to the crossplay feature.

Siege usually prompts you with a pop-up to let you link your console progress to a Ubisoft account, but you can also do it through a browser.

If you don’t have a ready-to-use Ubisoft account, you’ll need to create one before starting the above process.

Creating accounts has become considerably faster thanks to platforms supporting other means of login methods. You can even use your Facebook account to create a Ubisoft account, but you’ll want to use your PlayStation or Xbox login details to make the process even faster.

You can easily create a new one through the linking process that Siege starts when you start up the game. It’ll guide you through the whole process, but you can also create one through a web browser if you don’t have your console with you. 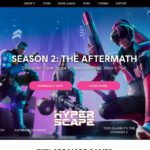