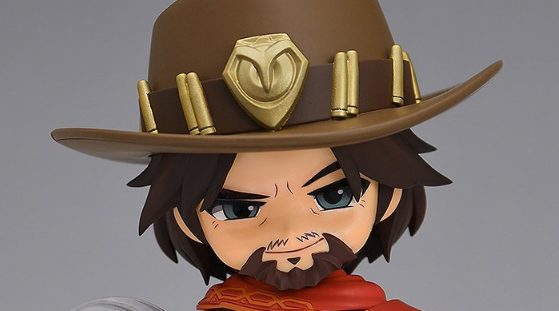 Just after announcing a new Overwatch Nendoroid Mercy toy available at BlizzCon, toy maker Good Smile Company has just confirmed another. McCree is the 11th Overwatch hero to join the lineup, available for advanced pre-order during BlizzCon. Advance pre-order is open on Nov. 3 and 4 exclusively at BlizzCon, according to the toy maker.

A regular pre-order session will open up “soon after,” Good Smile Company said in a tweet. “Stay tuned for more details.”

Like the cobalt blue Mercy skin variant, there isn’t a lot of information immediately available. But given Nendoroid’s history with Overwatch figures, it’s clear it’ll be in the $50 to $60 range and come with a number of accessories and face plates. Judging from the image on Twitter, he at least has a gun variant that gives the look of a spinning pistol—very Western. Nendoroids typically run around six-inches tall, so the McCree figure will likely be within that range, too.

Aside from the Mercy skin variant, Good Smile Company just opened up pre-orders for its Torbjörn Nendoroid figure. It’s a bit pricier than others in the line—Torbjörn costs $60. But he comes with his own tiny turret and interchangeable parts, which give customers the ability to create some of his old abilities.