Since the game’s release, many ideas have been flowing around for alternative skin ideas. The game features a couple of DLC items that can be unlocked and a rotating item shop that introduces new cosmetics to the game every day. Content creators, gaming companies, and esports teams have been posting their takes on how they could have an epic Fall Guys skin and the developer decided to use the enthusiasm to start a bidding war.

The so-called “Battle of the Brands” requires interested parties to share their skin concepts on Twitter while also including their bid. All proceeds from the event will be donated to Special Effect, a U.K.-based charity that aims to level the playing field for gamers with disabilities.

Here’s a full list of all the bidders so far and the available concept ideas.

Though most organizations didn’t have time to prepare a concept since the bidding war was almost spontaneous, it looked like some were born ready. Some of the fierce bidders in the bidding war also brought out their skin concepts in addition to their wallets. 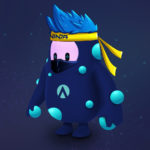 The “Battle of the Brands” event ended on Aug. 31 with a collaboration of huge names swinging in with a last-minute bid of $1 million. The highest bid until G2 Esports, Ninja, Aim Lab, and Mr. Beast weighed in was $510,000 by FG Teev.

Mediatonic, Fall Guys’ developer, plans to work on four different skins to honor all of the entities right after it’s done sorting out the donations to Special Effect.

The developer hasn’t mentioned when the collaboration skins will become available for players, so keep an eye on Fall Guys‘ Twitter account for future announcements—and save your Kudos and Crowns.