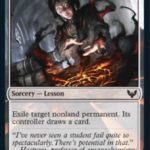 Strixhaven: School of Mages is making interesting use of the sideboard with its two new mechanics, Learn and Lesson, which expands the available cards in a Limited MTG game by allowing players to “wish” out a Lesson from outside of the game.

Lesson spells are sorceries that can be grabbed by playing cards with Learn. When players Learn, they can get a Lesson card from outside the game or discard a card to draw a card. In official games, outside the game means a player’s sideboard.

Some Lessons can be finishers, while others are utility spells. Here are the best Lesson cards in STX for Limited.

This Lesson gives you an instant battlefield. Three creatures, one of which has Flying, for seven mana is a good deal. Mascot Exhibition brings nine power to the battlefield with no deckbuilding restrictions. This is a good colorless option that will break stalemates.

Each color pair has a Lesson that summons its signature Creature. All the spells are worth playing if you’re in those colors. Fractal Summoning appears to be the best out of the cycle. Fractal Summoning scales well at each phase of the game. The X cost lets this spell have various applications. It’s a quick way to take advantage of Quandrix’s +1/+1 counter payoffs from your sideboard.

This is a great Lesson that helps Lorehold decks in multiple ways. This helps Lorehold decks find answers with the card draw ability. These strategies also want to cast spells from the graveyard, so discard effects are essential. Illuminate History helps fill the graveyard. In the mid game, this spell also comes with a 3/2 body. This Lesson packs a lot of value into four mana.

Environmental Science is one of the better lower-rarity Lessons. The effect isn’t flashy, but getting a basic land and two life is solid. This spell is good on its own, so being able to live in your sideboard and be an extra card is a strong benefit. It’s worth picking up a couple of copies of Environmental Sciences.

A trap most players fall into with removal is imagining it will hit the opponent’s bomb rare all the time. Most of the time, removal is going to be begrudgingly used on an opponent’s utility creature. Introduction to Annihilation has the benefit of being fetched from the sideboard as an extra removal spell for poor situations.

See Introduction to Annihilation on Amazon

This won’t replace more efficient cards, but it doesn’t need to. A colorless five-mana answer to any nonland permanent is strong. You’re incentivized to use it on an opponent’s best card because they get to draw a card. That’s a fine drawback for a card that only has to be used when you really need it.