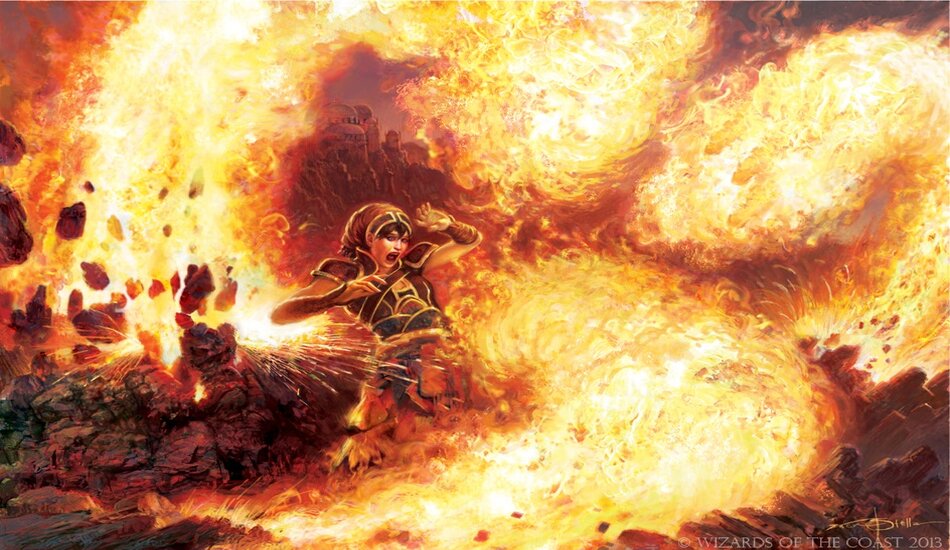 Fires is one of the best archetypes in Magic: The Gathering Standard and it just got better with Wrath of Storm.

The Theros: Beyond Death (THB) spoiler flood began today with Wrath of Storm, a Red board wipe that deals four damage to all creatures and planeswalkers. It isn’t an Instant speed spell, but with a CMC of four (two Red), Wrath of Storm will certainly have a major impact on the MTG Standard metagame.

A Chinese version of the card was previewed but there’s a translation.

“Wrath of Storm deals four damage to each creature and each planeswalker,” the translation reads.

Board wipes in Magic typically deal damage to creatures, but the Wrath of Storm includes planeswalkers too. After the release of War of the Spark, containing a record number of 36 planeswalkers, removal designs have branched out to include multiple targets. Questing Beast in Throne of Eldraine, for example, dealt four to a planeswalker and an opponent when it struck damage to the face.

Wrath of Storm is similar in design to Mizzium Mortars, Return to Ravnica, but costs slightly less to cast and includes planeswalkers in its damage. Taking out a planeswalker in the current meta, however, often requires more than four damage. Rakdos Knights also has Rotting Regisaur, a three drop 7/6 that will survive Wrath of Storm.

But against a majority of Aggro decks, Wrath of Storm will clear the board. It’s a powerful THB removal spell at sorcery speed that will likely get used in a variety of archetypes.

Theros: Beyond Death is set to release digitally on Jan. 16 and officially launch on Jan. 24.