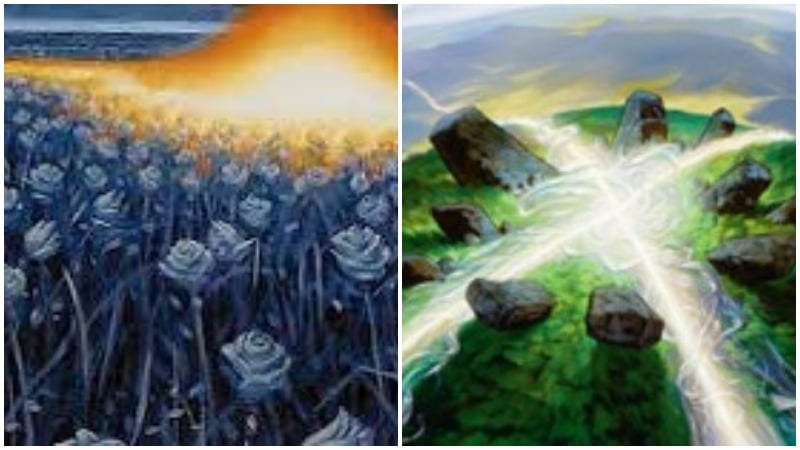 Magic: The Gathering Core Set 2020 spoilers gave an answer to Esper Control/Mid-Range and Mono-Red Burn: a reprint of Leyline of Sanctity.

Set to release on July 12, MTG Core Set 2020 contains a mix of reprinted and new cards available to play in Standard and other various Magic: The Gathering formats. With a total of 280 cards in M20, the biggest reprint spoiler to drop today was Leyline of Sanctity.

Leyline of Sanctity’s enchantment is that of hexproof. Protecting the player from spells and abilities, hexproof before a match begins is a game-changer in the MTG Standard format. No longer can Esper Mid-Range or Control play Thought Erasure, or Dimir play Duress.  The same goes for the number one archetype in Standard at the moment, Mono-Red Aggro.

Shutting down Burn is a huge deal, especially considering the help the archetype’s received from M20 spoilers so far.  In MTG Standard, there is no Mono-Red “destroy enchantment” card. Gruul has Thrashing Brontodon, but unless the Core Set 2020 has one for Red, burn decks are out of luck.

How many other Leyline reprints that’ll be in the M20 set is still unknown. Having a few more in the set could prove to shake up the metagame in Standard, however, much like War of the Spark did with its release in May.

Magic: The Gathering Core Set 2020 is set to release on July 12, with a pre-release draft taking place on July 5-6. Digital players will get early access to M20 via MTG Arena and Magic Online when it releases July 2.