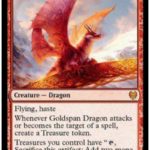 Kaldheim is a Magic: The Gathering Standard-legal set that’s packed with a number of valuable cards.

Containing a total of 285 cards, Kaldheim (KHM) is a Viking-themed, Norse-inspired set. Tribal decks like Deathtouch and Elves are possible in Standard and Limited formats once again with the launch of KHM. And a large number of legendary creatures within the set have Commander players hyped for the future. Returning mechanics include Snow and Changeling, along with new ones like Foretell and Boast.

Standard 2021 rotation removed ELD from the MTG format, providing an opportunity for several KHM cards to become playable while also rising in value. Goldspan Dragon beat out Vorinclex, Voice of Hunger for the top spot. Rotation also opened the door for other cards like Valki, God of Lies, and Alrund’s Epiphany to potentially rise in price.

The global launch of Innistrad: Crimson Vow (VOW) has shifted the meta, causing a number of price changes to KHM cards. The cards worth money are listed in descending order and will get price updates with the launch of each new MTG Standard-legal set and after major Magic tournaments.

From Gods and Dragons to a Phyrexian Praetor, here are the KHM cards worth money and the ones to watch closely.

Goldspan Dragon is fun to play in the Standard format—and it’s powerful, too. Arguably one of the best-designed KHM cards, the dragon has found a home in other Magic formats like Commander and Brawl. Just a week after the set’s digital release via MTG Arena, Goldspan Dragon slotted itself into Izzet Control, Mono-Red Aggro, Gruul Adventures, and Temur Ramp Standard decks.

Following the launch of MID, Goldspan Dragon had crested above $40. The release of VOW dropped the dragon to around $35, with weekly trends showing signs that Goldspan Dragon may continue to decrease slightly. The dragon might also see a revival depending on the meta at the upcoming Innistrad Championship.

Valki, God of Lies is a Modal Double-Faced card with Tibalt, Cosmic Impostor on its backside. Valki immediately found a home in one of the most potent Standard Constructed decks prior to the 2021 Standard rotation, Dimir Rogues. The God of Lies is also a commander to build around in the EDH format and has been included in the Esika, God of the Tree Commander deck as well.

Valki, God of Lies was valued at around $16 prior to the release of VOW and has since fallen to around $13. Despite small decreases in price over time, Valki, God of Lies has consistently remained above $10 and should continue to do so heading into Kamigawa: Neon Dynasty.

Alrund’s Epiphany was only worth around $2 to $3 following the launch of KHM. The MTG Blue Sorcery spell began rising in value around March to become a staple and detrimental card within the Standard format following the 2021 fall rotation.

Priced at around $8 with the launch of MID, Alrund’s Epiphany has since risen to around $11.50. The Sorcery speed spell is on the hot seat for an MTG ban following the release of VOW but continues to rise in value leading up to the Innistrad Championship.

Koma, Cosmos Serpent flew under the radar at the launch of KHM. Slotted in as a sideboard card within Sultai Ultimatum decks at the Kaldheim Championship, the Legendary Serpent rose in value to around $15 as a solid finisher within ramp builds.

Following the launch of MID, Koma, Cosmos Serpent dropped to around $12. The serpent continued to dip in value slightly leading up to the launch of VOW and is priced at around $11, where it’s holding stable.

Commander has become one of the most popular Magic formats to play in and it’s driven up the value of Esika, God of the Tree. Valued at around $16 at the launch of KHM, Esika, God of the Tree commands her own five-color build in EDH and can be found in Sisay, Weatherlight Captain or Golos, Tireless Pilgrim decks.

Esika, God of the Tree dropped in price following the 2021 fall rotation but has stabilized at around $10 with the launch of VOW.

KHM cards to keep an eye on

With each new MTG set launched, prices of previous sets will fluctuate. The cards to watch are ones that have dropped below $10 but still have the potential to rise in value once again.

Halvar, God of Battle is a Modal Double-Face God in KHM that slotted into Mono-White Aggro in Standard prior to the 2021 rotation and numerous Commander builds following the release of Kaldheim.

The KHM God dropped to around $6 and bounced back to around $11 with the launch of MID. Following the release of VOW, however, Halvar, God of Battle is priced at around $9.

The legendary squirrel, Toski, Bearer of Secrets, spiked in price after its KHM release to around $10. It then fell dramatically to around $2 several weeks later. Since then, it’s slowly been on the rebound, getting played in Commander builds like Chatterfang, along with Standard decks like Mono-Green Aggro, and Simic ramp.

Toski rose from $5 to around $8 with the release of MID. Following the launch of VOW, it’s dipped slightly to around $7.50. Shifts within the Standard meta could revive Toski, Bearer of Secrets value. 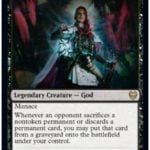 Valued at around $5 since the release of KHM, Tergrid, God of Fright//Tergrid’s Lantern is making a comeback within the Standard format via Mono-Black Control. Priced at around $4 with the global launch of VOW, the legendary God could see a spike in value depending on the meta at the Innistrad Championship in Dec.