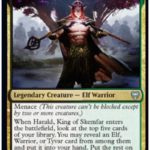 Elf tribal is returning to Magic: The Gathering within the Limited format via a Black and Green Midrange archetype in Kaldheim.

Midrange decks capitalize on being flexible, with touches of Aggro and Control built into them. BG in MTG Kaldheim shifts from the typical Golgari “dying matters” Midrange archetype to a Midrange Elf tribal build that likes to go wide with tokens and reanimate from the graveyard. The goal behind drafting BG in KHM Limited is to use Elf synergies that will get stronger during the midgame and go lethal before running out of gas.

Here are the best Black/Green Elf cards to build around in Kaldheim Limited.

Harald, King of Skemfar is the official KHM Draft legend with the color combination of Black and Green. The elf warrior is a legendary creature (only one copy on the battlefield at a time) who has Menace, along with a CMC of 1(BG) and 3/2 stats. Harald, King of Skemfar can apply early pressure on an opponent via his usage of the keyword Menace. He also tutors for Elf and Warrior creature types from the library. Upon entering the battlefield, Harald’s controller can look at the top five cards of their library and reveal an elf, warrior, or Tyvar card to put in hand. 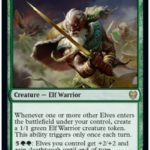 Low-cost creatures in a Midrange build allow a player to establish a board state during the early game. Elvish Warmaster accomplishes this in the GB KHM deck by creating a 1/1 Green Elf Warrior token whenever one or more other elves enter the battlefield under that player’s control. He’s a two-drop 2/2 who’s a solid first pick in Draft to build around. Elvish Warmaster can also function as a finisher, pumping all elves with +2/+2 and Deathtouch at the cost of 5(GG).

Due to Elvish Warmaster’s rarity of Rare, the Elf Warrior isn’t always an option. Other solid early-game cards include Duskwielder and Guardian Gladewalker. Duskwielder is a one-drop 1/2 that can block early Aggro creatures and has a Boast ability that shaves one life off your opponent while you gain one life. Guardian Gladwalker is a Changeling that places a +1/+1 counter on a target creature upon entering the battlefield. The Shapeshifter synergizes nicely with Deathknell Berserker, an elf two-drop 2/2 who creates a 2/2 token upon death if its power was three or greater. 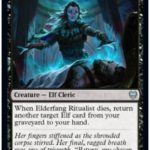 Mid-game creatures are the foundation of the BG deck, providing powerful synergies, abilities, and solid stats. Elderfang Ritualist is a three-drop 3/1 who returns an elf card from the graveyard, to hand, upon death. Elderleaf Mentor creates a 1/1 Elf Warrior token upon entering the battlefield, which synergizes with Skemfar Shadowsage—a four-drop 2/5 Elf Cleric who deducts an opponent’s life total, or gains you life, based on the number of elves you control.

Bloodline Pretender is a Shapeshifter that lets its controller pick a creature type (Elf), who scales with +1/+1 counters every time an elf enters the battlefield. There’s also Littjara Glade-Warden, another Shapeshifter who can pump creatures with a +1/+1 upon exiling a creature from the graveyard.

If you high roll in Draft and come across a Canopy Tactician, the Rare Elf Warrior is a solid first pick, just like Elvish Warmaster. 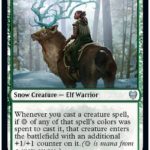 Players can also choose to incorporate Snow into the BG Midrange Limited build, using cards like Boreal Outrider and Sculptor of Winter. Snow lands are a necessity when pulling off Snow synergy and are drafted like any other card in KHM Limited Draft. If you’re playing around Snow in BG Midrange, Spirit of the Aldergard is also a solid four-drop option over Littjara Glade-Warden. Glittering Frost will work too but has a CMC of 2(G), competing with better three-drops. 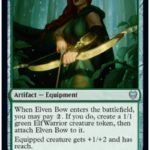 Elven Bow is an Equipment in KHM that can add value to a number of creatures. It’s a one-drop that creates a 1/1 Elf Warrior token when an additional two mana of any color is paid upon casting. Elven Bow also provides +1/+2 to that created token and Reach. If the creature dies, Elven Bow remains and can be attached to another creature upon paying its Equip cost.

Elves don’t have a saga in KHM, but Binding the Old Gods slots right into the BG Midrange build. Its first chapter destroys a nonland permanent, while the second chapter searches for Forest. And the third chapter gives all creatures Deathtouch, which can tear apart an opponent’s board state when you have a battlefield full of elf tokens and creatures. 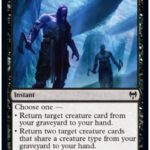 A number of spells bring together elf synergies within the BG Midrange build. Raise the Draugr is an Instant with a CMC of 1(B) that can either return two target creatures from the graveyard to hand that share a creature type (Elf). And go-wide boards can capitalize on Elven Ambush, another Instant with a CMC of 3(G) that creates a 1/1 Elf Warrior token for each elf you control.

Elven Ambush combos nicely with Skemfar Shaowsage, as does Return Upon the Tide. It’s a Sorcery speed spell that returns a creature to the battlefield. If that creature is an elf, it creates two 1/1 Elf Warrior tokens. Return Upon the Tide also uses the new KHM mechanic Foretell, providing an option to split its cost up over the course of two turns. 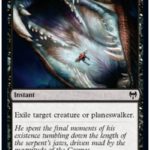 The BG Elf tribal Midrange build contains a solid number of removal spells, too. Feed the Serpent is a four-drop Instant that exiles a target creature or planeswalker. Weigh Down is a Sorcery spell that applies a -3/-3 to a target creature for a cost of (B) and exiling a creature from your graveyard. And Thornmantle Striker is an Elf Rogue that can double as removal upon entering the battlefield based on the number of elves you control.