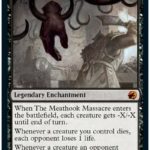 A return to the plane of Innistrad in Magic: The Gathering has ushered in several Midnight Hunt cards worth money.

Released digitally on Sept. 16 and globally on Sept. 24, Innistrad: Midnight Hunt (MID) highlights werewolves and humans fighting back against creatures of the night. The set contained three planeswalkers, along with a number of Mythic Rare and Rare creatures/spells with monetary potential.

The MID cards worth money are listed in descending order and are an estimated value at the time of the Innistrad: Crimson Vow (VOW) global tabletop release. Following the Magic World Championship, a few cards skyrocketed in value, while the rest hovered around $7 to $10. The next price update will take place after the launch of Kamigawa: Neon Dynasty.

From werewolf synergy to demons and dragons, here are the MID cards worth the most money, cards worth watching, and the biggest losers from the MTG set.

The Meathook Massacre is a Black Mythic Rare Legendary Enchantment packed with loss and gain life shenanigans due to its -X/-X ability based on “X” mana spent to cast the Sorcery speed spell.

With so many Aggro builds dominating the Standard meta, in conjunction with how good the Legendary Enchantment is within multiple Magic formats as a board wipe, The Meathook Massacre went from $17 to $22 following the 2021 MTG World Championship.

With the launch of VOW, Meathook Massacre skyrocketed to around $39 and is now priced at around $48 at the start of 2022.

Wrenn and Seven were ranked No. 1 in terms of MID cards worth money due to having five loyalty abilities and being a card that will likely see play in multiple MTG formats. The Legendary planeswalker still has a presence within the meta due to its plus-one ability that digs four deep for lands that can get put onto the battlefield tapped with the zero loyalty counter. The minus-three creates a powerful token creature with Reach.

See Wrenn and Seven on Amazon

Wrenn and Seven was valued at around $24 prior to the launch of VOW but dropped slightly at the start of 2022 to around $20. The planeswalker should remain around $20 until the release of Kamigawa: Neon Dynasty. 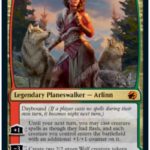 Arlinn, the Pack’s Hope is a great Mythic Rare in Limited and Standard, synergizing with the RG werewolf archetype. She may also see play in Commander as an alternate commander in conjunction with Tovolar, Dire Overlord.

The release of VOW gave werewolf tribal decks a few needed cards, but it hasn’t led to the build taking over the Standard meta anytime soon. The planeswalker was priced at around $17 and dropped to $12.50. Heading into the new year, Arlinn, the Pack’s Hope continues to maintain its value.

Lier, Disciple of the Drowned

Lier, Disciple of the Drowned is a unique Mythic Rare five-drop that provides each Instant and Sorcery card in your graveyard Flashback. The legendary human wizard was valued between $7 and $8 following the global release of MID. But the launch of VOW has slowly had the human wizard on the rise, with Lier worth around $8 to $9.

At the start of 2022, Lier rose in value to around $11 and should remain that way until the launch of Kamigawa: Neon Dynasty.

Intrepid Adversary fell off the value train shortly after the release of MID. But with the revival of Mono-White Aggro within the Standard meta, the human scout has climbed out of the depths of penny range to a value of around $9. 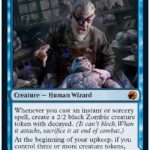 Poppet Stitcher didn’t pop off with Dimir Control within the Standard format, but the human wizard that can transform into an Artifact has seen plenty of gameplay within the Commander format. Valued at around $10 after the launch of MID, Poppet Stitcher has since fallen to around $7 at the start of 2022.

MID cards to keep an eye on

A number of MID cards have the potential to regain value with the launch of VOW. The upcoming Innistrad Championship will help define the new Standard meta prior to the release of Kamigawa: Neon Dynasty, potentially raising the value of cards that have dropped well below $10.

Teferi, Who Slows the Sunset

Dropping to $11 following the launch of MID, Teferi, Who Slows the Sunset is valued at around $5 with the global release of VOW. But Esper Control builds are on the rise in Standard due to the number of Aggro decks within the meta, using the planeswalker for card advantage and Lifegain.

Zombies have shown potential within the Commander and Standard format, even with the MID mechanic Decayed. The VOW set removed the Decayed mechanic, giving Tainted Adversary a chance to maintain its value. Worth around $7, the zombie Adversary is a MID card that could rise in value to around $10 once again.

Unnatural Growth is a Mono-Green Enchantment that doubles the power and toughness of each creature you control until the end of turn. It pumps at the start of each combat. Unnatural Growth was valued at around $13 pre-release and fell to around $6 via the global release.

Following the VOW global launch and the start of 2022, Unnatural Growth is still valued at around $6. Much of the Enchantment’s worth will depend on the Standard meta going forward.

Losers from the MID set are cards that have dropped from over $10 to just a few dollars in value. Some have the potential to rise in price once again but aren’t likely making any moves in the near future.

Moonveil Regent has the potential to become a staple top-end card within Izzet spell matter builds in a number of various MTG formats. The dragon’s stats are solid and its abilities can end games. The dragon fell to $9 after the launch of MID and is now valued at around $3.50. 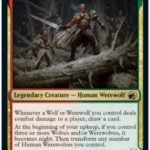 Werewolf tribal decks in just about any Magic format want Tovolar, Dire Overlord. The legendary creature flips wolves without the Daybound and Nightbound MID mechanic while also producing card draw for every wolf that deals damage. And it has solid stats as a three-drop.

Tovolar, Dire Overlord dropped to around $6 following the launch of MID and is priced at around $3 with the global VOW release.

Update Nov. 23 10am CT: Each MID entry was updated in price following the global release of VOW.