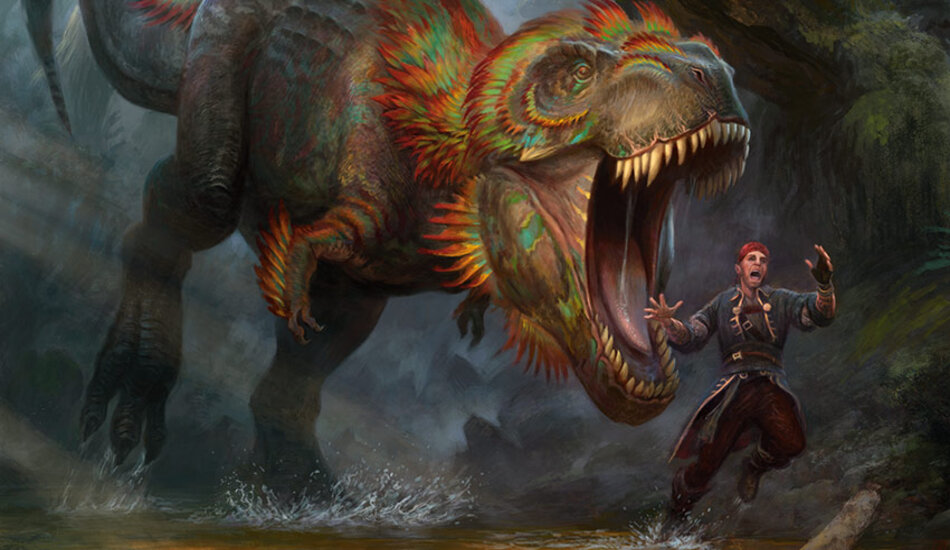 Not since Magic: The Gathering Ixalan have dinosaurs been a prominent archetype in Standard and with both Ixalan and Rivals of Ixalan rotating out in the fall, M20 is reviving dinosaurs with Marauding Raptor.

The M20 set is different from the previous Core Sets, containing more cards and a focus on Commander along with Standard and other Magic: The Gathering formats. Several themes have already been established through the MTG Core Set 2020 spoilers this week and it seems Wizards of the Coast is adding dinosaurs to the list with the introduction of Marauding Raptor.

Costing only two mana (one red) to cast, Marauding Raptor is a two/three dinosaur with a pair of interesting abilities. Dinosaur cards in Magic: The Gathering are not only stompers but they also feed off of damage dealt through the mechanic, “Enrage.”

Marauding Raptor fits right into Commander by dealing damage to other creatures you own as they enter the battlefield, activating their “Enrage” mechanic. It also lowers the cost of spells by one colorless mana, getting dinosaurs out on the battlefield before your opponent has a chance to draw removal or counterspells.

In Standard, until the rotation in the fall, Marauding Raptor will revive the dinosaur archetype and wreck havoc on players ranking up on MTG Arena. With a little bit of dino luck, the M20 set will have additional dinosaur creatures to feed off the power of Marauding Raptor.

The Core Set 2020 is set to release on July 12, along with a Magic: The Gathering pre-release Draft from July 5 to 6. Digitally, the M20 set launches via MTG Arena and Magic Online on July 2.