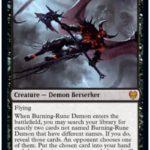 The release of Kaldheim in Magic: The Gathering has brought about a healthy Limited meta with a number of bombs that can end games.

A bomb in Magic is a card that will have a major impact within a Limited match. It’s a slang term that evolved from the acronym BREAD, applied towards drafting in the Limited format. A bomb is best defined as “something explosive and powerful,” according to Marshall Sutcliffe of the Limited Resources podcast. The recent Kaldheim (KHM) set in Magic contains a total of 15 must-have bombs, along with a number of honorable mentions.

Bombs in Magic typically have a rarity of either Mythic Rare or Rare. White in KHM has a large number of Rare cards that deserve an honorable mention—such as Glorious Protector, Resplendent Marshal, and Righteous Valkyrie. Other honorable bomb mentions in KHM include Haunting Voyage, Calamity Bearer, Sarulf, Realm Eater, and Quakebringer.

From Flying creatures to Sagas and Artifacts, here are the 15 bombs every player should grab in the KHM Limited format.

A 6/6 Flyer with a CMC of 4(BB) is a great top-end finisher to pick. Burning-Rune Demon has all this and an enter-the-battlefield effect full of value. Upon entering the battlefield, players can retrieve two cards from their library not named Burning-Rune Demon. Choosing two cards of equal value places opponents at an inevitable disadvantage that can win games.

Sagas return to Standard via KHM, with a cycle of 10 Mythic Rare and Rare. Firja’s Retribution stands out from the pack as a Limited bomb in BW, with all three lore counters providing value and board state advantage. Over the course of three turns, Firja’s Retribution has the potential to deal up to 12 damage, not including other Angels on the battlefield.

Goldspan Dragon is one of the best KHM Standard cards and is a bomb in Limited too. The dragon is an ideal finisher, with a CMC of 3(RR), Flying, and Haste. As an added bonus, Goldspan Dragon produces Treasure Tokens when it attacks or becomes the target of a spell. The tokens produce two mana of any color, providing an abundance of mana to end a match as long as the player doesn’t run out of gas. 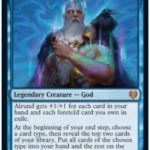 Alrund, God of the Cosmos is unique among the Kaldheim MDFCC Gods in that his backside, Hakka, Whispering Raven can return to hand—letting a player cast both sides during the course of a single match. Hakka is a two-drop who can deal early damage and return to hand while also providing a Scry of two. The Scry synergizes with Alrund in that a player knows what card type to choose prior to his ability which takes place at the beginning of the end step.

Kaya the Inexorable is the strongest planeswalkers to play in KHM Limited. She starts with five loyalty counters with a casting cost of 3(WB), and all three of her abilities are powerful. The first prevents a creature from dying, returning it to hand and leaving a token on the battlefield in its place. Her second exiles a permanent, and the minus-seven ultimate essentially brings her back for free the following turn.

Doomskar is a solid White wrath with a CMC of 3(WW). Foretell, a new Magic mechanic introduced via KHM, bumps Doomskar from a reliable removal card to a first-pick bomb. Doomskar wipes the battlefield of all creatures by turn three, utilizing Foretell. Being able to cast at any stage of a match provides players with an immediate advantage that can easily lead to a victory. 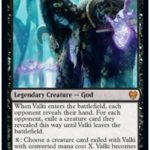 Valki, God of Lies is a solid two-drop in Black who can disrupt an opponent’s early-game curve. The downside to the God is that when he’s removed, the opponent gets their card back. The true bomb is the backside of Valki: Tidbalt, Cosmic Impostor. Upon entering the battlefield, players get a permanent emblem from Tibalt that allows them to play cards exiled by the impostor God.

Vehicles are rarely bombs in Limited, but Esika’s Chariot is an exception to the rule. It can block as soon as it’s cast (turn four), creating two tokens that can crew it. And every time Esika’s Chariot attacks, it creates a copy of a token (2/2 cat). The vehicle is hard to remove and has way more upside than downside for its CMC of 3(G).

Halvar, God of Battle/Sword of the Realms 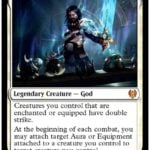 Halvar, God of Battle is a strong 4/4 four-drop that provides value by granting Equipped creatures Double Strike and being able to move Auras and Equipment for free. Halvar isn’t the bomb, though, despite being the front face of the MDFCC. Sword of the Realms is a top first-pick due to its cheap casting and ability to return to hand when the creature it’s attached to dies, allowing players to cast both sides of the MDFCC despite having only one copy.

Eradicator Valkyrie is a solid four-drop with Flying and Lifelink, a powerful first pick for any Black Limited build. As an added bonus, the angel berserker has Boast, a new KHM mechanic that provides abilities at an additional cost upon attacking. Upon attacking and at a cost of 1(B), Eradicator Valkyrie’s controller may sacrifice a creature, forcing an opponent to sacrifice a creature or planeswalker.

The new KHM Boast mechanic sets Dragonkin Berserker apart from other two-drops with Haste. He reduces the cost of Boast by one when another dragon is on the battlefield, which won’t come into play too often in Limited. But his own Boast ability creates a 5/5 dragon with Flying at a cost of 4(R). Dragonkin Berserker is great during the early game and can produce a dragon to finish off an opponent in the late game. And should he stay alive after creating a 5/5 dragon, it’s essentially game over for an opponent.

Battle Mammoth is a powerful 6/5 finisher with a CMC of 3(GG) who has Trample and can produce card draw when a permanent is targeted with a spell or an ability. The icing on the cake for Battle Mammoth is that it utilizes Foretell, making it possible to play the elephant as early as turn four. If removed, Battle Mammoth cantrips and, if allowed to stay on the battlefield, will end games. 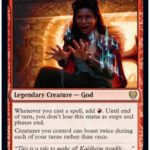 Harnfel, Horn of Bounty is the bomb, despite being the backside of Birgi, God of Storytelling. It has a high casting cost of 4(R) but reaps an endless value via discard and cantrip. Harnfel, Horn of Bounty can be used multiple times throughout a turn and each turn, preventing a player from ever running out of gas. Birgi, God of Storytelling is an added bonus to the Artifact, providing value through her abilities and being a three-drop 3/3.

Koma, Cosmos Serpent is a no-brainer bomb in KHM Limited. The serpent is a 6/6 who can’t be countered when cast. Every turn it creates a 3/3 token serpent who fuels Koma’s abilities. Players can sacrifice a serpent token to tap a target permanent and shut down its activated abilities, or provide Koma with indestructible until the end of turn. Koma, Cosmos Serpent has a high CMC of 3(GGUU) but it’s worth it as it will end games once on the battlefield and create serpents.