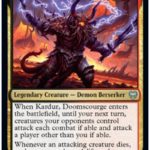 Berserker tribal has arrived within the Magic: The Gathering Limited format via the colors Black and Red with the release of Kaldheim.

The launch of Kaldheim (KHM) in MTG has brought about returning mechanics like Snow, along with new ones such as Boast and Foretell. Players utilizing Foretell, splitting up the cost of a spell over two turns, are typically playing a slower game. While Boast, a bonus ability paid for when a creature attacks, slots ideally into Aggro builds. BR also utilizes second spell synergy, gaining scaling stats when a second spell is played within the same turn.

Within the Limited format, the colors Black and Red feature a tribal synergy via the creature type Berserker. By Drafting or playing (Sealed) a majority of Berserker creature type cards, players can gain an advantage over their opponents via cards like Village Rites and Raise the Draugr. The Boast mechanic slots nicely into Aggro, providing an advantage via scaling power and burn damage. BR hits opponents fast and hard while setting up sweet combos and taking advantage of tribal.

From Elf Berserkers to Dwarf Berserkers, here are the best MTG BR Aggro cards to draft in KHM Limited.

Kardur, Doomscourge is the legendary Draft archetype creature for BR within KHM. It’s a four-drop 4/3 that forces opponents to attack each turn if able. Kardur, Doomscourge works well in Commander, but also in Limited too. Whenever an attacking creature dies, either your creatures or an opponent’s, you gain life while the opponent loses one. Kardur pushes the Aggro strategy hard in BR, rewarding its controller with Lifegain as it chips away at an opponent’s health. 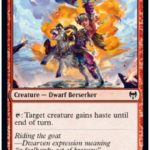 Playing Aggro requires a number of low-cost creatures that can impact an opponent’s health dramatically during the early stages of a match. Within KHM, there are a number of cheap Aggro creatures who utilize Boast for additional attack value while synergizing with other spells due to the Berserker tribal-theme.

Tuskeri Firewalker is a three-drop 3/2 with the option to Boast, allowing its controller to play a card off the top of their library when the mechanic is activated. Duskwielder is a one-drop with Boast that can ping an opponent for one life while gaining its controller a life point. And Immersturm Raider is another two-drop option that cantrips upon entering the battlefield at the cost of discarding a card. 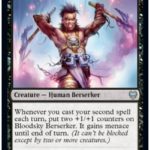 There are a number of Aggro and tribal payoffs within BR. Bloodsky Berserker is one of the best since it scales in power with each second spell cast per turn, which is a common occurrence in an Aggro build during the early and mid-game stages. Infernal Pet is also a solid option, scaling with +1/+1 counters for each second spell cast during a single turn while also gaining Flying until the end of the turn.

Skemfar Shadowsage provides tribal payoffs, chipping away at an opponent’s life or granting its controller life, based on the number of creatures on the battlefield with the same creature type (Berserker).

Raise the Draugr is another tribal payoff spell, returning two creatures from the graveyard to hand when they are the same creature type. Players can even opt to fill in space with a Basalt Ravager—a four-drop 4/2 Giant who pings (X) damage to any target 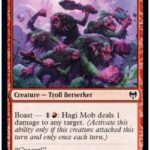 Aggro builds have a tendency to run out of gas during the later stages of the game. BR in KHM Limited compensates for that via a number of powerful combos. Hagi Mob is a five-drop 5/4 with Boast, dealing one damage to any target upon activation. When paired with Jarl of the Forsaken, a four-drop 3/2 Cleric who has Flash, any creature or planeswalker pinged by Hagi Mob is destroyed.

Shackles of Treachery is an MTG staple Sorcery spell, gaining control of a target creature until the end of turn. It pairs nicely with Village Rites, a one-drop Instant speed spell that draws two cards at the extra cost of sacrificing a creature. And it also works with the saga Kardur’s Vicious Return, dealing three damage to any target upon sacrificing a creature during the first lore counter. 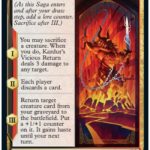 BR contains some solid options via a saga or Equipment when filling out a build. Kardur’s Vicious Return provides value via sacrificial damage and reanimation with a boost in power. Tormentor’s Helm is a one-drop Equipment that pumps a creature +1/+1 and only costs one to equip. It pairs nicely with any low-cost Aggro creature, especially Deathknell Berserker. 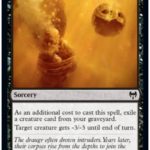 The colors Black and Red typically have some of the best Common and Uncommon removal spells out of all the Magic colors. Black has three solid choices: Weigh Down, Feed the Serpent, and Poison the Cup. Red has Demon Bolt and can sometimes utilize Dual Strike in BR Aggro, but not often. Poison the Cup and Freed the Serpent are solid early picks in Draft, along with Demon Bolt. Weigh Down will often “wheel,” making it easier to grab during the later picks in Draft.

Combat tricks can also work as a form of removal should a player finding themselves unable to grab cards like Poison the Cup or Demon Bolt. Run Amok is one of the best Red combat tricks in KHM Limited, pumping a creature with +3/+3 and Trample until the end of turn. And Frost Bite typically works better with Snow but can fill in if needed for two damage as a combat trick.