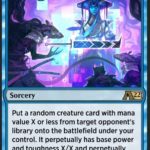 Wizards of the Coast has revealed new Neon Dynasty: A22 cards amid the double-elimination playoff bracket at the NEO Championship that showcased the Magic: The Gathering digital format Alchemy.

Orzhov Venture and Grixis Midrange were the two standout MTG Alchemy decks at the NEO Championship following the release of Innistrad: A22 and two rounds of balance changes. WotC dropped several Neon Dynasty: A22 spoilers during the final day of the tournament, showcasing what the new digital format on MTG Arena will look like going forward.

Here’s the new Neon Dynasty: A22 cards revealed during the NEO championship.

Vehicle decks in the Alchemy format got a slight buff from Dragonfly Pilot, able to crew up the Artifacts easier while also conjuring the NEO Vehicle Dragonfly Suit to hand.

Ramping in Green just got a lot easier via Kami of Bamboo Groves, a solid one-drop in any Alchemy MTG deck that wants to ramp into bigger creatures quickly.

Similar to the MTG card Bribery, Better Offer incorporates the digital-only mechanic Perpetually that determines the power and toughness based on the amount of mana spent to cast the Sorcery card. It also has Ward for protection.

Kami of Mourning has potential within sacrifice and spirit builds via its powerful ETB effect that can reanimate creature cards from your graveyard to the battlefield.

Mothrider Cavalry is an interesting White midrange creature that can drop onto the battlefield at a cost of only two mana. The human samurai in MTG Alchemy also has Flying and pumps the team when on the battlefield.

All cards Neon Dynasty: A22 cards will become available via MTG Arena on March 17.