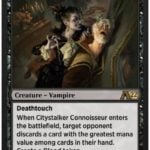 The launch of MTG Arena Alchemy, which included exclusive digital-only Magic cards from Alchemy: Innistrad (A22), has created a new Standard meta packed with cards that have improved a large number of popular decks.

The Alchemy format within MTG Arena is an alternative Standard format that includes digital-only cards, mechanics, and cards that have been rebalanced, alongside every Standard-legal card in Magic. A22, which was released on Dec. 9 with a total of 63 digital-only cards, opens up design space within Magic while the format itself provides designers with the ability to nerf or buff a card depending on its performance within the meta.

Some of the decks performing at top competitive levels within the MTG Arena Alchemy format, according to stats provided by MTGDecks, include Naya Runes, Mono-White Aggro, Gruul Werewolves, Orzhov Clerics, Orzov Venture, Mardu Midrange, and Azorius Control. Several of these builds are also strong within the Standard-legal format but gained A22 cards that helped them get even better.

Honorable mentions that didn’t make the best Alchemy: Innistrad card list but are included within many of these best MTG Alchemy decks are Rahilda, Wanted Cutthroat, Angel of Unity, Cursebound Witch, Garruk, Wrath of the Wilds, and Lupine Harbingers.

Cards from A22 are subject to be rebalanced, scheduled to take place around every four to six weeks. Wildcards aren’t provided to MTG Arena players upon any rebalancing. Cards aren’t listed in any specific order and updates to this article will take place as the meta evolves or upon any nerfs and buffs that are applied.

From a powerful one-drop wolf to an Artifact with a spellbook, here are the five best MTG Alchemy: Innistrad cards.

Tenacious Pup is a powerful A22 one-drop in Green that’s slotted nicely into Mono-Green Aggro, Gruul Werewolves, and Golgari Stompy builds. Upon entering the battlefield, the wolf pup gains you one life point, similar to Prosperous Innkeeper. Instead of producing a Treasure token, though, Tenacious Pup gives the next creature you cast a +1/+1 counter, Trample, and Vigilance.

On a two-drop like Werewolf Pack Leader within Mono-Green Aggro decks, the 3/3 wolf becomes a 4/4 with Trample, Vigilance, Pack Tactics, and its mana sink ability that increases its power to a 6/4 within the MTG Arena Alchemy format.

Tenacious Pup is a versatile one-drop that’s packed with value. It’s ideal in an opening hand but still worth its mana cost throughout all stages of a game. As an added bonus, the wolf has 1/2 stats, allowing it to block other early one-drops from your opponents.

Supporting synergies within the MTG color Black, Sanguine Brushstroke is an A22 Enchantment worth slotting into a three-drop spot. It’s found success within Mono-Black, BW Midrange, and Rakdos Vampire decks. Using the MTG Arena mechanic Conjure, the Enchantment creates a Blood Artist upon entering the battlefield. Due to a nerf, Sanguine Brushstroke no longer grants its controller the ability to gain one life when a creature dies.

Blood Artist is a two-drop 0/1 that drains an opponent of one life point while providing its controller with one life point every time it or another creature dies. This gain-and-drain ability synergizes with the passive ability on Sanguine Brushstroke, which steals a life point from an opponent while gaining you a life every time a Blood token is sacrificed.

Mono-Black Control has found a great deal of success with Sanguine Brushstroke when played alongside cards like Meathook Massacre, Blood on the Snow, and Deadly Dispute. And Rakdos Vampires gain an advantage via the gain and drain from sacrificing Blood tokens produced by Anje, Maid of Dishonor and Bloodtithe Harvester.

Mono-White Aggro and go-wide MTG decks gained another solid creature card via the A22 Inquisitor Captain. The four-drop human cleric has 3/3 stats and the keyword Vigilance. But its ability is what makes it worth slotting into a variety of White Weenie, Cleric, Boros-Aggro, and Selesnya Human decks. Upon entering the battlefield, Inquisitor Captain places a creature card that has a cost of three mana or less onto the battlefield while also shuffling another creature with a mana cost of three or less into your library.

Using the MTG Arena mechanic Seek, creature cards with a mana value of three or less can come from a player’s library or graveyard. Since most go-wide and Aggro decks have an abundance of low-cost mana creatures, Inquisitor Captain synergizes with these builds and makes them better.

The A22 human cleric is narrow in design but fuels aggressive play strategies within decks like Mono-White Aggro that were already a top-meta choice within the Standard format. A nerf was applied to Inquisitor Captain, but the human cleric remains a playable staple within Mono-White Aggro Alchemy decks.

Key to the Archive

Control decks have tapped into Key to the Archive from A22, using the MTG Arena mechanic Draft in conjunction with being a mana-dork that produces two mana in any combination of colors. The Draft mechanic allows players to choose one of three cards from a spellbook that contains a total of 15 cards. Key to the Archive is packed with spells that support Control deck synergies.

All of these spells are playable thanks to Key to the Archive providing two mana in any combination of colors upon being tapped. Top MTG Arena Control decks using Key to the Archive include Azorious, Jeskai, Bant, and Dimir Control.

Citystalker Connoisseur is a versatile Innistrad: A22 card that has slotted nicely into Rakdos Sacrifice and Rakdos Aggro/Midrange Alchemy decks. The release of NEO helped boost the 3/3 vampire with Deathtouch. A powerful combo has emerged between Citystalker Connoisseur and the saga Fable of the Mirror-Breaker//Reflection of Kiki-Jiki due to the vampire being a great target for Kiki-Jiki to copy.

Sacrifice decks in the MTG colors Red and Black are also using Citystalker Connoisseur since it produces a Blood token upon entering the battlefield, synergizing with the NEO Artifact Oni-Cult Anvil.

Dragons are hot within the MTG Arena Alchemy format thanks to the addition of Town-razer Tyrant from A22. The four-drop dragon has Flying and an enter the battlefield ability that targets an opponent’s land. That land loses abilities it may have, excluding mana abilities, and deals two damage to its controller unless it’s sacrificed.

Creature lands are especially popular within the MTG Standard format and Town-razer Tyrant joins Field of the Dead as a hate card toward those types of lands.

Naya Runes has elevated Forsaken Crossroads, a mana-fixing land that has value beyond mana fixing. The Rare Innistrad: A22 land enters the battlefield tapped unless you started a game on the draw. Forsaken Crossroads can produce one mana of any color that you choose upon it entering the battlefield and has the ability to Scry for one up ETB as well. The land has improved the Naya Runes deck within the MTG Alchemy format and should continue to get added to other multicolor builds in the future.