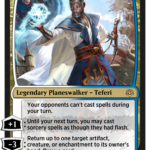 A total of 19 Magic: The Gathering cards are slated to be rebalanced within the Historic and Alchemy formats via MTG Arena on Jan. 27, including a nerfed Teferi, Time Raveler that’s now unbanned in Historic.

Scheduled to take effect via MTG Arena on Jan. 27, Teferi, Time Raveler was unbanned from the Historic format via a nerf to his CMC and the planeswalker’s static ability. Changes made to the once dominating planeswalker should remove Teferi as an auto-include within Control decks while allowing him to see gameplay within specific builds. Top-performing cards within the Alchemy format such as Town-Razer Tyrant, Inquisitor Captain, and Sanguine Brushstroke were also hit with nerfs.

Nerfs weren’t the only balance changes taking place, though. A number of buffs were applied to AFR cards that support the Venture mechanic. A total of 11 MTG Arena cards were rebalanced with a goal of making “decks centered around the Venture keyword action less clunky and more reliable at winning games,” according to WotC.

From the rebirth of Teferi, Time Raveler and a nerf to Hullbreaker Horror to a potential revival of dungeon shenanigans, here’s every MTG Arena nerf and buff applied to the Historic and Alchemy formats taking place on Jan. 27.

All nerfs and buffs applied to MTG Arena Alchemy and Historic format cards will go into effect on Jan. 27.

Update Jan. 27 at 7:10pm CT: What was likely a bug fix to Rahilda, Wanted Cutthroat//Rahilda, Feral Outlaw was recognized by Robert Taylor on Twitter and added to the patch notes.