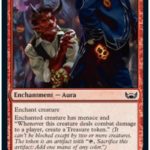 The Magic: The Gathering color Red within the Streets of New Capenna Limited Draft format contains a handful of powerful Common and Uncommon rarity cards while supporting several archetypes.

Red within the Streets of New Capenna (SNC) set is a supportive color, but that doesn’t make it a weak color within a Limited format. A total of five archetypes use the MTG color Red as it synergizes with sacrifice themes via the Maestros Casualty mechanic, Aggro strategies via the Riveteers Blitz mechanic, and creature-heavy builds within the Cabaretti faction. Red also contains a number of SNC cards that create Treasure tokens, a hot commodity within a three-color Limited format.

There are several Red MTG cards that are worth considering when drafting, providing value but not worth a top pick. Creatures with Flying are in an abundance within the New Capenna Limited Draft meta, making Wrecking Crew a solid one-of to have within your sideboard. Pyre-Sledge Arsonist is a solid Limited card, specifically in sacrifice-themed builds. Exhibition Magician nails the flavor of SNC and is a good Common to pick up near the end of a pack. And Call in a professional is a good one-of Instant removal spell that contains an added value for its three-mana cost.

Here are the best Red Limited Common and Uncommon rarity cards to play within the New Capenna Limited Draft format.

It’s rare that an Aura Enchantment is a top Draft pick in Limited but Sticky Fingers fits the bill in New Capenna. The one-drop grants Menace to the creature it is attached to and produces a Treasure token each time that creature deals combat damage. And as an added bonus, when the creature gets destroyed or the Enchantment gets removed, Sticky Fingers draws a card.

Pugnacious Pugilist is a solid top-end five-drop Uncommon rarity card with baseline stats of 4/4. What makes the ogre warrior stand out from the pack is its ability to create a tapped and attacking 1/1 Red devil token when Pugnacious Pubilist attacks that will deal one damage to any target when it dies. With Shield Counters in the New Capenna Draft meta, those devil token pings are valuable. And Pugnacious Pubilist has Blitz, able to attack turn four while synergizing with sacrifice themes in the MTG colors Blue, Red, and Black.

Goldhound is a one-drop with First Strike and Menace, making it a solid addition within any Aggro New Capenna Limited Draft build. The Treasure dog also synergizes with sacrifice themes, producing one mana of any color when it is sacrificed.

Synergizing with the New Capenna sub-mechanic of having five or more mana values in your graveyard, Big Score is an Instant speed spell packed with value. Four mana is on the costly side, but in exchange for the price, players get two cards drawn and two Treasure tokens created. Players can choose to either discard a land if flooded or a creature that synergizes with the five mana value sub-mechanic.

Slotting into Aggro builds as a 1/1 for one mana is Unlucky Witness. The human citizen contains an additional benefit, though, able to exile two cards from your library. You may play one of those cards until your next end step, providing value to the SNC one-drop during the later stages of a game. Unlucky Witness synergizes with Alliance, the citizen creature type, and with sacrifice themes.

Two-drops with 3/1 baseline stats are decent within aggressive decks. Riveteers Requisitioner gains additional value as a New Capenna Limited Draft card in that it has an option to Blitz. When the viashino rogue dies, it creates a Treasure token. And if you paid the Blitz cost, it also draws you a card. Sacrifice Riveteers Requisitioner prior to the Blitz sacrifice trigger, and the two-drop Uncommon provides even more value.

The New Capenna Limited Draft format falls short on decent removal spells, increasing the value of Strangle. Sadly, it’s a Sorcery speed spell that can’t hit face, but the SNC Common is still worth grabbing a couple of copies if possible in that it deals three damage to any target creature or planeswalker.