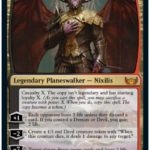 A number of Magic: The Gathering Mythic Rare and Rare multicolor Streets of New Capenna Limited Draft cards are worth grabbing as a top pick.

There are three forms of multicolor cards within the Streets of New Capenna (SNC) set: three-color, hybrid, and two-color. And there are a total of 10 archetypes: five three-color factions and five two-color archetypes. A two-color Common and Uncommon multicolor New Capenna Limited gold card is typically a higher Draft pick than almost any other card in a three-color Draft set. Doing this provides flexibility to stay open to at least two allied three-color factions while potentially splashing for a bomb.

There are exceptions to this general rule, though. A total of 14 Mythic Rare/Rare SNC cards have the potential to pull a player into specific colors when appearing as a first pick option within a New Capenna Limited Draft, or slotted into a build as a splash-able bomb. Three of these are hybrid multicolor cards while all the others are three-color, with the exception of Ob Nixilis, the Adversary.

Here are the best Mythic Rare or Rare MTG New Capenna Limited Draft cards to grab as a top pick in ascending order.

The SNC set contains a cycle of five Ascendancy Rare Enchantments for each of the five three-color factions. Of those five, Brokers Ascendancy is the best and the only one worth grabbing as a first or second Draft pick. It’s not the type of Enchantment that gains immediate value as a three-drop, since it works best with several creatures on the battlefield. But once put in play and left untouched, Brokers Ascendancy will scale your creature’s power and toughness levels to a match victory.

Fleetfoot Dancer is an SNC Rare that can quickly spiral out of control and end games. The Elf Druid is a four-drop with Trample, Lifelink, and Haste—in conjunction with 4/4 baseline stats. Fleetfoot Dancer is the type of bomb that is worth splashing an additional color for.

Leader of the Broker faction within SNC, Falco Spara, Pactweaver is a four-drop 3/3 legendary creature with Flying and Trample. The Bird Demon’s baseline stats and MTG keywords are solid by themselves. But Falco Spara, Pactweaver also enters the battlefield with a Shield Counter, can look at the top card of your library at any time and allows you to cast spells from the top of your library by removing any type of counter from a creature you control.

Maestros Diabolist is a rare that will thrive within a Grixis build while also synergizing with other New Capenna Limited Draft archetypes. Tokens are solid sacrificial fodder within the SNC Limited meta, and Maestros Diabolist creates one each time the Vampire Warrior attacks. And he’ll get in plenty of attacks due to having 1/4 baseline stats with the MTG keywords Deathtouch and Haste.

Soul of Emancipation is a bomb in builds that are producing tokens, have an abundance of low-powered creatures or creatures with Shield Counters. The Avatar can target three nonland permanents upon entering the battlefield, turning each of them into a 3/3 Angel with Flying. Players can opt to target one enemy creature and two of their own, or all their own permanents. In conjunction with the 3/3 Angels that have flying, Soul of Emancipation is a 5/7. The Avatar is a solid top-end finisher and worth grabbing as a top pick within the New Capenna Limited Draft format.

Synergizing with Connive and discard, Toluz, Cleaver Conductor is a solid SNC Rare that has flexibility due to the Human Rogue’s hybrid casting cost. Upon entering the battlefield, Toluz Connives, and whenever you discard a card while the Human Rogue is on the battlefield, those cards are put into exile instead of your graveyard. And when she dies, all cards exiled via the Clever Conductor’s ability are returned to your hand.

Worth slotting into multiple archetypes and splashing if needed, Ziatora’s Envoy can win games. The Viashino Warrior is a four-drop with 5/4 baseline stats that can Blitz for one additional mana. Ziatora’s Envoy also has Trample, which synergizes with the warrior’s ability, providing card and mana advantage.

Likely one of the best SNC wraths, Hostile Takeover has value in just about any New Capenna Limited archetype. At a cost of five mana, you get to wipe out any creature with a toughness of three or less while ensuring one of your creatures remains alive. As an added bonus, you can target an opponent’s key creature and turn it into a 1/1 prior to the wrath effect taking place.

Leader of the Riveteers faction, Ziatora, the Incinerator is a top-end bomb within any New Capenna Limited archetype. The demon dragon has a CMC of six, baseline stats of 6/6, and has Flying. And at the beginning of your end step, sacrificing a creature allows you to deal damage equal to that creature’s power to any target while also creating three Treasure tokens.

Rigo, Streetwise Mentor is a sleeper hybrid worth grabbing early in a New Capenna Limited Draft. The Cat Citizen synergizes with several archetypes, whether via creature tokens or low-cost creatures. Each time a creature with power one or less that you control attacks, Rigo draws a card. Opponents will have to target Rigo, Streetwise Mentor with a form of removal, allowing you a better chance of having one of your powerful creatures stick to the battlefield.

Possibly one of the best crime bosses in SNC, Jetmir, Nexus of Revels pumps the power levels of creatures based on the number of creatures you control on the battlefield. The Cat Demon has solid baseline stats of 5/4, is a four-drop, and counts itself towards his abilities. Jetmir has a vertical ability that scales in power with the addition of more creatures on the battlefield. Three should happen every game while six may happen, and nine will end the game outright.

Leader of the Obscura faction, Raffine, Scheming Seer is the best of the five patriarch crime bosses in the New Capenna Limited format. The Sphinx Demon has Flying and Ward one, in conjunction with 1/4 stats that can block almost any flying creature. Raffine Connives “X” times whenever any of your creatures attack, with “X” equaling the number of attacking creatures. Not only can Raffine scale quickly, but it can trigger a Connive if there is already a creature on the battlefield from turn two when it drops on turn three.

Jinnie Fay, Jetmir’s Second is the best hybrid and second-best SNC Rare or Mythic Rare within the New Capenna Limited meta. The Elf Druid turns any token into either a 2/2 creature token with Haste or a 3/1 creature token with Vigilance. Jinnie upgrades all 1/1 creature tokens and makes use of Treasure tokens that aren’t needed during the late-game stages. She’s also a three-mana hybrid, allowing Jinnie Fay to slot into multiple archetype builds while having 3/3 stats.

Ob Nixilis, the Adversary isn’t an overpowered planeswalker in formats like Standard, but within the New Capenna Limited format, he is a bomb. Able to get played as early as turn three, he copies himself. The Black and Red planeswalker has a drain-and-gain strategy built into his plus-one ability while protecting himself through his minus-two ability—all while disrupting your opponent’s gameplan. If Ob Nixilis hits the battlefield early and isn’t removed, he will quickly take over the game.