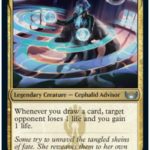 Drafting in the SNC Limited format is different than drafting in a two-color set. The focus is on three-color factions, one for each of the five New Capenna families. Players should view powerful Mono-color and Dual-color cards as a priority, allowing them to transition into one of two allied three-color faction archetypes.

There are a total of nine multicolor cards worth top picking and a handful of honorable mentions to watch out for. The three-color faction New Capenna Limited faction cards have been separated from the Dual-color gold cards.

Each of the five three-color New Capenna Limited factions has additional support via a cycle of Charms. These Charms aren’t top picks but can add value to your builds once you’ve decided your Draft direction. In addition, there are honorable mentions like Disciplined Duelist, Crew Captain, Lagrella, the Magpie, Mr. Orfeo, the Boulder, and Nibme Larcenist. But only four are truly worth a top pick in New Capenna.

Possibly one of the best three-color gold SNC cards, Corpse Appraiser has a 3/3 solid baseline stat with a card advantage “enters the battlefield” ability. When the vampire rogue ETBs, it exiles a card from any graveyard. If a card is exiled, you get to look at the top three cards of your library and put one of those permanents into your hand. And as an added bonus, Dimir colors care about mana values within the graveyard.

Brazen Upstart is a three-drop 4/2 with Vigilance that has a decent death trigger. The elf shaman’s baseline stats get value out of trading with an opponent’s larger creature and when Brazen Upstart dies, you get to look at the top five cards of your library. Choose one of the five cards to put in your hand and put the rest on the bottom of the library. Brazen Upstart is in the Cabaretti faction, which cares about creature-heavy decks that benefit from the Alliance mechanic.

Similar to Brazen Upstart, Cormela, Glamour Thief stands out because of her death trigger. The vampire rouge is a 2/4 with Haste that can tap for mana. But her true value is in when she dies, returning up to one Instant or Sorcery card from your graveyard to your hand. And the Maestros faction cares about spells, able to copy Instants and Sorceries via the SNC Casualty mechanic.

A majority of the Dual-color New Capenna limited honorable mention cards are build-around gold cards that have the potential to become powerful in a narrow shell. Cards like Forge Boss have the potential to be really good but need a shell that wants and thrives on sacrificing creatures. The same applies to Civil Servant and Jetmir’s Fixer. There are four cards, however, that stand out as a top New Capenna Draft pick.

Darling of the Masses

Darling of the Masses is an Uncommon rarity bomb within a citizen tribal go-wide build, providing all citizen creature types +1/+0. But she also fits into other archetypes as well, creating a 1/1 citizen token every time she attacks with her 2/4 baseline stats. Players will get the most value out of Darling of the Masses in a Cabaretti shell.

Creatures with Flying are always on the stronger side within a Limited format. Syndicate Infiltrator is a four-drop 3/3 that has the potential to become a 5/5 during the later stages of a game. Dimir colors care about sacrificing creatures to copy spells. It also benefits from those cards in the graveyard via a sub-mechanic that wants five or more mana values in your graveyard. It’s a hoop to jump through but one that is worth it, as Syndicate Infiltrator synergizes with both the Obscura and Maestros factions.

Celestial Regulator also has Flying as a three-drop 2/3. The angel advisor also has an enters the battlefield ability that taps a creature you don’t control. And as an added bonus, prevents that creature from untapping during your opponent’s untap step if you control a creature with a counter on it. Celestial Regulator synergizes more so with the Brokers faction, but with Obscura as well.

A slightly weaker Flying creature than Celestial Regulator and Syndicate Infiltrator, Metropolis Angel makes up for it via their ability. Upon attacking with one or more creatures that have counters on them, the angel soldier enables you to draw a card. The Obscura archetype already has card draw built into it, with the potential for counters while the Brokers are lacking in card draw while potentially playing more cards with counters.