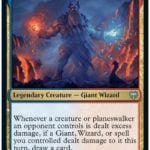 Giant tribal shows promise within Magic: The Gathering Standard format with the release of Kaldheim.

Standard in MTG was already running a number of powerful Giant cards, and with the release of Kaldehim (KHM) on Jan. 28, Giant tribal becomes a legitimate possibility in the colors Blue and Red (Izzet). Bonecrusher Giant is already a Standard staple in Red and Crystalline Giant slots nicely into a UR Giant tribal as another three-drop.

Giants typically have a high casting cost due to their power levels and added abilities, making it hard to find low-cost cards to play during the early game.  The release of KHM helps solve this issue with the Invasion of the Giants saga and Shapeshifters like Bloodline Pretender, who scales with a +1/+1 counter upon chosen creature type entering the battlefield. Running Temur (adding Green to UR) also becomes a possibility with the Shapeshifter Realmwalker and the saga The Bears of Littjara.

From Wizards to Berserkers, here are the four best MTG Giant KHM cards.

Aegar, the Freezing Flame has an overall solid design at the cost of one colorless, one Blue, and one Red mana. The Giant Wizard is an Uncommon 3/3 who draws a card whenever a Giant, Wizard, or spell you controlled dealt damage to an opponent’s creature or planeswalker that was dealt excess damage (greater than lethal damage).

Additional cantrip in UR is always welcome, and Aegar, the Freezing Flame is a solid early drop with a 3/3 body that can block Aggro while also applying early-game pressure.

Able to deal damage from the battlefield or graveyard, Quakebringer has a CMC of 3(RR) and is a 5/4. The Giant Berserker’s casting cost is slightly on the high-end, which is why the MTG design team gave it Foretell, a new KHM mechanic that allows players to split a spell’s casting cost over the course of two turns.

Quakebringer has a passive ability that prevents your opponent from gaining life, which works in Standard, along with other formats like Commander and Historic. It also deals two damage to each opponent at the beginning of your upkeep if it’s on the battlefield, in your graveyard, and you control a Giant.

Basalt Ravager is a four-drop 4/2 whose enter the battlefield ability contains more value than its stats. In conjunction with changeling and Shapeshifter, the Giant Wizard can deal a large amount of damage to any target upon entering the battlefield. Basalt Ravager is a solid budget card to include in a Standard or Limited build, able to hit for lethal, especially when paired with Calamity Bearer.

Running four copies of Calamity Bearer is most likely overkill. It takes up a valuable four-drop spot and is primarily played for its ability that deals double damage to a permanent or player when a Giant source you control deals damage to that permanent or player. With a defense of four, it’s susceptible to removal and can’t block other large creatures without dying. But it has a solid combo potential with creatures like Basal Ravager and Tectonic Giant.