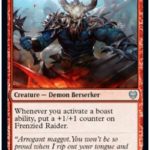 The color Red in Magic: The Gathering has gained a few new tricks for the Limited format within Kaldheim.

Aggro players in Magic love playing Red in the Limited format, and Kaldheim (KHM) has provided a wide variety of cards for players seeking to defeat opponents quickly. There are plenty of cheap and low-powered creatures to go wide with, utilizing the new Boast mechanic for extra value. Removal in Red synergizes with tribal themes, and combat tricks like Run Amok can quickly end a game. There’s even cheap Equipment like Tormentor’s Helm and Snow synergy within RG builds.

From berserkers to giants, here are the best Common and Uncommon cards to draft in KHM Limited.

Frenzied Raider is a two-drop 2/2 who scales in conjunction with the new KHM Boast mechanic. Slotting ideally into RW Aggro builds, the demon berserker gains a +1/+1 counter every time the Boast mechanic is activated. Frenzied Raider scales similar to Nessian Hornbeetle from Theros: Beyond Death, able to quickly overpower an opponent’s line of defense if left on the battlefield too long.

Powerful RW creatures with Boast that Frenzied Raider synergizes with include Usher of the Fallen, Battershield Warrior, and Fearless Liberator.

A cycle of five tribal Equipment cards within KHM, including Dwarven Hammer in Red, will likely see a good amount of gameplay in the Limited format. At face value, the Equipment isn’t anything special. But when it comes into play, its controller has the option to pay an additional two mana of any color on top of its casting cost of 2(R) to create a 5/1 red dwarf berserker token.

The token will certainly die at some point, but the Equipment remains, pumping stats on low-cost creatures to provide value and stability during the late-game.

Dealing six damage to a target creature or planeswalker, Squash is a solid Instant. It has a CMC of five but is reduced by three mana of any color when that player controls a Giant. Squash synergizes nicely with Aegar, the Freezing Flame in UR, along with Frostpyre Arcanist.

Other Giants that can slot into a Red Limited build include Cinderheart Giant, Craven Hulk, and Doomskar Titan. Players can also utilize Changeling in RG builds with creatures like Littjar Glade-Warden, Realmwalker, and Guardian Gladewalker.

Demon Bolt is another Red Instant that deals four damage to a creature or planeswalker. It stands out as a solid pick in Draft, though, utilizing the Foretell mechanic. Spells like Demon Bolt are situational and often can’t get cast when needed because of its CMC of three. But with Foretell, players can split the cost of Demon Bolt and cast it when needed for (R). The Instant slots nicely into RG and RW builds, taking out powerful threats to stabilize and even gain the advantage.

Doomskar Titan is a solid finisher within Aggro and go-wide builds, utilizing Foretell to split its expensive casting cost while pumping the team with plus-one and Haste. Upon entering the battlefield, all creatures gain +1/0 and Haste until the end of turn. Doomskar Titan is only a 4/4 itself, but having Foretell allows a player to drop on turn five, which is ideal in Aggro and go-wide cheap/token decks. It also synergizes with Squash should an opponent have a large creature on the battlefield.

RW Boast and Aggro decks can utilize a card like Tuskeri Firewalker. The human berserker is a three-drop 3/2, who exiles the top card of that player’s library when Boast is activated. The player can then play that exiled card in the same turn. Tuskeri Firewalker also synergizes with double spell builds, RW, and UR. And should Tuskeri Firewalker fall upon attacking while activating Boast, its controller can simply cast a cheap creature off the top of their library.

Basalt Ravager slots nicely into UR giant tribal and will work with other tribal themes. The wizard giant deals (X) damage to any target upon entering the battlefield, where (X) is the greatest number of creature you control of a common creature type.

Giants work well because Basalt Ravager counts itself. But it can also provide value in elf builds or other tribal themed decks, like Berserker. Splashing changeling cards like Bloodline Pretender, Gladewalker Ritualist, and Littjara Glade-Warden is also a solid option. Basalt Ravager has a CMC of 3(R) and is a 4/2.

Similar to the other Rune enchantments in KHM, Rune of Speed can attach itself to any permanent upon entering the battlefield. The aura rune draws that player a card, pumps a targeted creature plus-one attack, and provides it Haste.

Providing Haste won’t matter in every situation but synergizes well with double spell decks, casting a low-cost creature, then pumping it with Rune of Speed while taking advantage of casting a second spell. Rune of Speed works in Aggro and double spell builds but loses value when slotted into midrange decks.

Fearless Liberator is another Aggro creature with Boast, creating a 2/1 dwarf berserker token when activated. Similar to Usher of the Fallen in White, the dwarf berserker will likely die upon its first attack and activation of Boast. But should it remain on the battlefield, Fearless Liberator becomes an immediate threat in KHM Limited matches that can spiral out of hand if not dealt with.