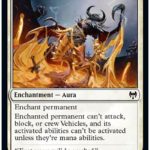 Capitalize on the best Uncommon and Common Magic: The Gathering cards from the Kaldheim set within the Limited format.

Scheduled to release digitally via MTG Arena and MTGO on Jan. 28, the color White in Kaldheim (KHM) showcases a number of cards utilizing the new Foretell and Boast mechanics. BW and UW archetypes have a focus on Foretell while RW and GW utilize Boast. The RW archetype also best supports Equipment.

From evasive angels to situational removal, here are the best Common and Uncommon White Limited cards in KHM.

Bound in Gold is a staple enchantment aura that shuts down an opponent’s permanent. Preventing everything except for static abilities, Bound in Gold becomes the best White aura in KHM Limited. And the prevention of an enchanted permanent from crewing Vehicles, in addition to attacking, blocking, and activated abilities, was a nice touch added by the design team.

Evasive creatures in White slots nicely into Aggro and go-wide builds. As a four-drop 3/2, Stalwart Valkyrie isn’t a top-pick card for those builds. But the angel warrior increases in value with its ability to enter the battlefield at a reduced casting cost, upon exiling a creature from the graveyard. Two-drops like Story Seeker provide Lifegain when traded early on, and then reduce Stalwart Valkyrie’s casting cost when exiled from the graveyard.

Shepherd of the Cosmos (Uncommon)

Shepherd of the Cosmos is a six-drop 3/3 Flyer that reanimates a permanent with two or less mana onto the battlefield and utilizes the new KHM Foretell mechanic. The angel warrior is an overall solid card that gains value by being able to split its overall cost with Foretell (two colorless to exile facedown and 3(W) to cast during another turn). And as an added bonus, Shepherd of the Cosmos reanimates a permanent, not just a creature.

Valkyrie’s Sword is an ideal finisher but lacks value during the early and mid-game. At face value, the Artifact Equipment pumps a creature +2/+1 but has a 1(W) casting cost in addition to an equip cost of three. Players can opt to pay 1(W) to cast and 4(W) upon it entering the battlefield instead, creating a 4/4 angel token with Flying and Vigilance—in which Valkyrie’s Sword attaches to that token at no equip cost, making it a 6/5 angel warrior creature token with Flying and Vigilance.

Clarion Spirit is a versatile two-drop 2/2 creature who creates a 1/1 Flying token upon casting a second spell each turn. The spirit slots nicely into BW and UW archetypes, utilizing Foretell, and contributes to go-wide Aggro strategies within an RW and GW build. Like most lower-cost creatures in Limited, Clarion Spirit loses value during the late stages of a match. It’s cheap casting cost, however, synergizes with KHM cards like Doomscar Oracle and Codespell Cleric.

Iron Verdict is a prime removal Instant speed spell with Foretell, dealing five damage to a target tapped creature. It’s a spell that has performed within the Limited MTG format in the past, with an upgrade via Foretell in KHM. Iron Verdict is typically a situational removal spell that can become a dead card in hand due to its 2(W) casting cost. Being able to cast for (W) via the Foretell mechanic instead of its full casting cost makes it easier to play when needed.

Utilizing the new KHM Boast mechanic, Battershield Warrior pumps all creatures +1/+1 until the end of turn. As a 2/2, the human warrior will likely die upon attacking. But the upside to all other attacking creatures gaining +1/+1 makes it worth picking up. Battershield Warrior isn’t a first pick in Draft and should only get picked when playing a creature heavy build that can reap the value provided by paying its Boast cost.

Usher of the Fallen (Uncommon)

Usher of the Fallen slots nicely into creature-based Aggro builds, creating a 1/1 token when the Boast ability is paid. The spirit warrior provides value when traded with an opponent’s creature and can kickstart go-wide strategies during the early game when an opponent doesn’t have blockers on the battlefield. Usher of the Fallen provides less overall value than Battershield Warrior but has fewer restrictions regarding the KHM Limited build it’s played in.

Ideal when slotted in Aggro builds, Goldmaw Champion utilizes Boast to tap a target creature. The dwarf warrior is a three-drop 2/3, which is typically a filler card at best when drafting. But its Boast ability adds value, especially when able to tap an opponent’s largest creature on the battlefield. And should Goldmaw Champion survive its attack while utilizing Boast, it gains even more value, as long as its controller has mana available each turn to pay the Boast cost.

Similar to Iron Verdict, Kaya’s Onslaught is a situational Instant speed spell that becomes better with Foretell. The Instant pumps a target creature +1/+1 and gives it Double Strike until the end of the turn. Kaya’s Onslaught has a normal casting cost of 2(W), which is slightly on the expensive side.

But with Foretell, Kaya’s Onslaught can be cast for only (W) after paying two mana of any color prior to the turn it was cast. Much like the other White situational combat tricks and removal, Kaya’s Onslaught is not a first pick but gains value within a creature heavy KHM Limited build.