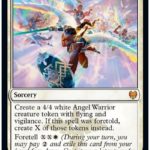 The upcoming Magic: The Gathering Kaldheim set contains over 30 cards utilizing the Foretell mechanic. But only five are Mythic Rares.

The new Kaldheim Foretell mechanic elevated MTG‘s critical thinking requirements by splitting a card’s mana cost over the two individual turns. Players can pay two mana at any time during their turn to exile a card in hand and turn it upside down. That card can get cast for its Foretell cost at a future turn. The new KHM mechanic was a mix of MTG head designer Mark Rosewater’s created mechanic called Layaway, based on a Star Wars card game mechanic, and top-down omen flavor.

The cycle of Mythic Rare Foretell cards in KHM features alternative borderless art and abilities that can change the course of a match. From taking an extra turn to creating (X) number of 4/4 Flying and Vigilance Angel tokens, here are the five monocolored MR Foretell cards in KHM.

Quakebringer is an interesting KHM card, rewarding its controller when the Giant Berserker is on the battlefield or in the graveyard. But when Foretold, it’s in exile until cast for its Foretell cost of 2(RR). When in play, it has 5/4 stats and prevents opponents from gaining life. It also deals two damage to each opponent at the beginning of your upkeep.

Should a player have two Quakebringers in the graveyard and one on the battlefield, it deals six damage to each opponent at the beginning of your upkeep. Quakebringer will likely see gameplay in Commander and even Standard. It also slots nicely into mill decks and big creature builds.

Similar to Notorious Throng, players can expect to see Arund’s Epiphany utilized in the Commander format. Its cost is steep, but worth it for an extra turn. And the two 1/1 Bird tokens are merely icing on the cake for a Control build, especially a Bird-themed one.

Haunting Voyage is another Commander format focused Mythic Rare Foretell spell. Within a tribal-themed build, despite its high casting cost, can prove detrimental to an opponent. Haunting Voyage may even find a home in Standard, due to the number of changelings printed in KHM.

Battle Mammoth is an elephant that will likely see play within in Mono-Green Stompy builds and Simic Ramp decks. With a Foretell cost on four, the 6/5 elephant with Trample is an ideal finisher. Battle Mammoth will also provide card draw should the match continue, and its controller has permanents targeted with a spell or an ability.