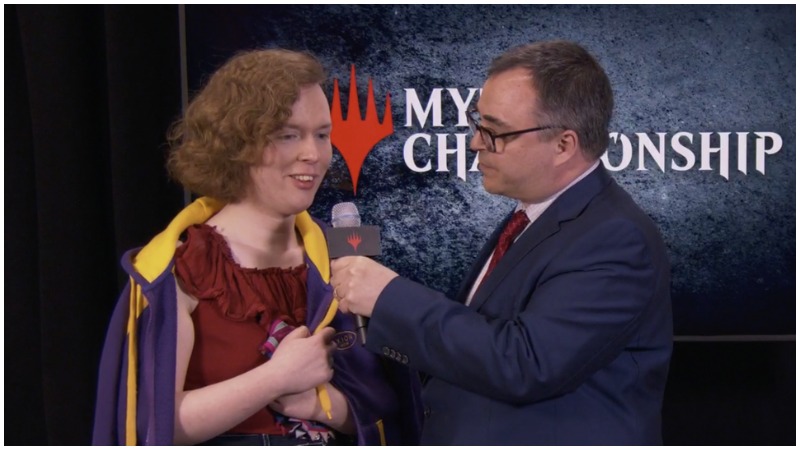 Image via Forbes and Magic The Gathering

In an attempt to promote trans rights, Magic: The Gathering player Autumn Burchett marked their basic land cards with handwritten text in black marker for the Mythic Championship VI.

But, according to Burchett, who is non-binary, Wizards of the Coast told them to remove the cards from their deck because they were altered. According to the rules at sanctioned MTG tournaments, players can artistically alter cards, though.

The images Burchett provided on Twitter show the name of the lands but the basic land symbol is covered. Yet it is not to a degree where an opponent might be confused.

The text written by Burchett doesn’t make the card unrecognizable, although it could make it difficult to see what the basic land is from a distance. But an argument can be made that the signature on the cards could, too. And signed cards are played at sanctioned tournaments all the time.

Burchett says that it was WotC who asked them not to play the basic lands and not the head judge at MCVI. They also said that there was no explanation given as to why the cards were not legal for play.

WotC didn’t censor Lee Shi Tian at Mythic Championship V, where he showed a public display of support for the Hong Kong protests. He even referred to the protests during a post-match interview.  And WotC was praised by the community for its support of Tian.

Update Nov. 9 2pm CT: WotC has allowed Autumn Burchett to use different altered basic land cards during the day two Mythic Championship VI Standard Constructed matches. A compromise was made between WotC and Burchett. The Magic: The Gathering organization allowed them to alter different basic land cards that didn’t obstruct the mana base or name on the card.