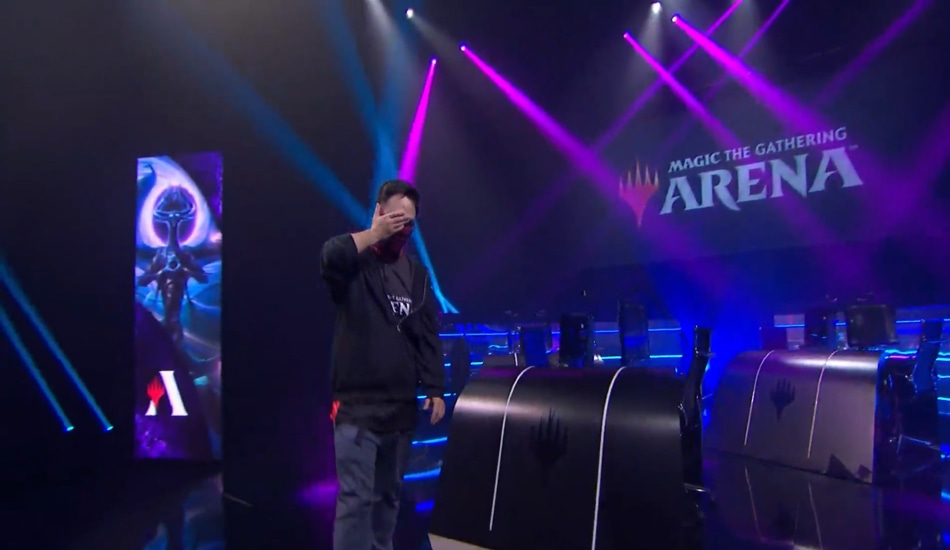 In an emotional win over Carlos Romao at Magic: The Gathering’s Mythic Championship V, Lee Shi Tian voiced his support of the protests taking place in Hong Kong and wasn’t censored by Wizards of the Coast.

Tian began his amazing run at Mythic Championship V yesterday by supporting the protests in Hong Kong as he donned a red mask over his face and covered one eye upon entering the main stage.

Tian’s entrance backed the democratic protestors who often wear masks in an effort to protect their identity from Chinese surveillance in Hong Kong. It was also a show of support for a volunteer nurse who was recently shot in the eye with a beanbag round during protests in Kowloon.

Censorship for those supporting the protests recently became an esports issue when Blizzard Entertainment banned Hearthstone player Ng Wai “Blitzchung” Chung after he called for a Hong Kong liberation during a post-match interview.

The censorship from Blizzard even extended to fans participating in the company’s livestreams. The company posted a statement on Oct. 12 saying, “we want to keep the official channels focused on the game.” Those who violated the request from Blizzard by typing in any form of support for Hong Kong via the Twitch chat at Hearthstone’s Masters Tour this past weekend had their accounts immediately suspended for 24-hours.

But Wizards of the Coast wasn’t about to follow the same path Blizzard has taken and instead allowed Tian and the Twitch chat at Magic’s Mythic Championship V to express themselves. Moderators of the Twitch chat for the tournament were even told by WotC to “allow and not touch” any statements supporting Hong Kong.

The support given to Tian by WotC may have played a role in his success yesterday as the Magic Pro League player had an amazing run at MCV with his Mono-Red Cavalcade deck, securing a seat in the finals taking place today. In an emotional post-game interview with Becca Scott, Tian expressed his gratitude.

“Life has been very tough in my hometown of Hong Kong,” Tian said. “It feels so good to play [Magic: The Gathering] as a free man.”

Lee Shi Tian will continue to play MTG as a free man today at Mythic Championship V,  where he’ll play for the $100,000 grand prize.