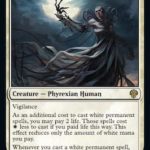 The Phyrexians are starting a Magic: The Gathering Multiverse war, showcasing a cycle of five creatures that let players pay life to cast with an additional effect in Dominaria United.

The Dominaria United (DMU) Standard-legal set, scheduled to globally launch on Sept. 9, will include a cycle of Defiler Phyrexian creatures in each MTG color. Each of these creatures allows players to pay two life for one color pip on casting costs for that specific color.

They also have keywords typically associated with those Magic colors and offer players an additional effect for casting a permanent of that specific color.

Defiler of Faith, for example, allows players to pay two life upon casting a White permanent that will cost one less White mana upon choosing the pay life option. The cost reduction effect only applies to that specific color pip. Each Defiler in the cycle has a total mana cost of either four or five. All have a rarity of Rare and none of them are legendary.

Here are the five Phyrexian Defiler creatures from Dominaria United that are in each of the five Magic colors.

The Phyrexian human, Defiler of Faith, has a mana cost of 3WW and is a 5/5 creature. It has the Vigilance keyword. And, upon casting any white permanent spell, Defiler of Faith creates a 1/1 White soldier creature token.

The Defiler of Faith is a solid creature that slots into GW Selesnya go-wide token-generating builds. It also might have a home in BW drain and gain decks, using the tokens as sacrificial fodder while gaining life to offset the cost of casting with life points.

Defiler of Dreams is a Phyrexian Sphinx with 4/3 stats and a mana cost of 3UU. It has the keyword Flying and upon its controller casting any Blue permanent spell, they get to draw a card.

The Phyrexian Sphinx has a slightly weak stat line but fuels archetypes like Red and Blue Izzet, preventing the deck from running out of gas. The Defiler of Drams can also work in Dimir Control for card advantage and may see gameplay in a White Blue Azorius tempo type of build too.

The Phyrexian Horror slots nicely into Mono-Black Aggro decks and has potential within Black and Red sacrifice decks that want to play aggressively (vampire).

Defiler of Instinct is a Phyrexian Kavu in DMU with 4/4 stats and a mana cost of 2RR. The creature has the keyword First Strike and upon its controller casting a Red permanent spell, deals one damage to any target.

The ping for damage works together with First Strike. And Defiler of Instinct can deal more than one damage in various MTG when paired with cards like Torbran, Thane of Red Fell, and Basilisk Collar.

Classified as a Phyrexian Wurm, Defiler of Vigor is a 6/6 creature with a mana cost of 3GG. It has the keyword Trample and puts a +1/+1 counter on each creature you control upon its controller casting a Green permanent.

The Defiler of Vigor is a shoo-in for Mono-Green Stompy and Blue/Green ramp decks. It’s a great finisher as it pumps the whole team +1/+1 and the Wurm can sneak in for lethal damage using Trample. Avabruck Caretaker is a solid Green card to pair with Defiler of Vigor in various MTG formats, giving it Hexproof and counters of its own.