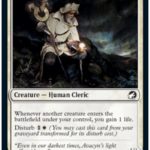 A number of Common Innistrad: Midnight Hunt (MID) cards have proven themselves within the Limited format since the MTG set launched digitally on Sept. 16. Removal spells like Eaten Alive have become a Black Draft bomb while the burn from Moonrager’s Slash has made it Standard playable. The Blue Instant, Consider, has already become popular in both Standard and Limited. And the Green Flash aura, Howl of the Hunt, has seen play within Gruul decks.

Two creature cards also deserve an honorable mention, like Gavony Trapper for his tapping an opponent’s creature ability, and Candlegrove Witch or her evasive Coven hits within the Limited format. From life-gaining one-drops with Disturb to a farmer who feeds giant insects, here’s the best Common rarity MID monocolored creature cards for each of the five MTG colors.

Often overlooked in Draft and a solid creature within specific Standard decks is Luncarch Veteran. The human cleric is a one-drop creature in the MTG color White that gains life every time a creature enters the battlefield, potentially providing valuable life gain within an opening hand in the Limited format. Thanks to its Disturb cost of 1W, Lunarch Veteran has value within the late-game stages too, gaining life every time a creature leaves the battlefield via Luminous Phantom.

Falcon Abomination is best within Limited builds utilizing zombie creature tokens, like UB or WU. The bird is a zombie itself, creating a 2/2 zombie token with Decayed upon entering the battlefield. For three mana and 2/2 stats with Flying, Falcon Abomination is a MID Common worth grabbing multiple copies of in Draft.

The zombie bird is playable in Standard within a zombie tribal budget build. But is typically left out of the higher-tier decks as zombie tribal works best within Mono-Black.

Liliana left a zombie mess on Innistrad after saving the plane, leaving creatures like Diregraf Horde to dominate the landscape. Able to create two 2/2 zombie tokens with Decay and exile two target cards from a graveyard, Diregraf Horde is worth the five mana cost within MID Limited.

The 3/4 zombie can also slot into budget Mono-black zombie tribal builds within Standard, and as a sideboard card in a budget WB sacrifice deck.

The color Red within MID is all about vampires, utilizing “if an opponent lost life this turn” as a buff to other cards when they enter the battlefield. Able to deal damage to an opponent upon simply attacking is Falkenrath Perforator, a two-drop 2/1. The vampire is a solid two-drop that will likely see play within Standard Aggro builds and is a great early beatdown card within MID Limited.

With the upcoming release of Innistrad: Crimson Vow, it’s possible that even more vampire-themed cards will gain power from an opponent losing life, making Falkenrath Perforator a very important early drop play. Until then, the vampire servant of Lady Anje works best in BR and WR decks.

Lands matter once again in Standard thanks to Wrenn and Seven and self-mill is back thanks to the return of Flashback and the new MID Disturb mechanic. Eccentric Farmer is a Green Limited Common rarity bomb that synergizes with both of these MTG themes, milling three cards upon entering the battlefield and then returning a land card to hand if it was milled that turn.

Within graveyard matters Limited decks, Eccentric Farmer is a must-have MID common in UG decks. The human peasant also has the potential to become Standard playable too.

The new MTG Standard-legal set MID launched digitally on Sept. 16 and has a global tabletop release scheduled to take place on Sept. 24.