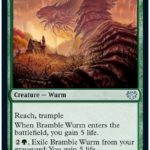 The color Green within the Innistrad: Crimson Vow Limited format is a solid synergistic Magic: The Gathering color that can ramp, has big top-end creatures, and a number of decent Daybound/Nightbound werewolves.

There are a total of four Innistrad: Crimson Vow (VOW) Limited archetypes: Red and Grenn werewolves, Green and White humans, Black and Green toughness matters, and Blue and Green self-mill. Honorable mentions that are too narrowly designed towards a specific archetype, or are more of a middle of the pack pick include Sporeback Wolf, Mulch, Wolfkin Outcast//Wedding Crasher, and Oakshade Stalker//Moonlit Ambusher.

Mulch is a solid two-drop that can find a single land or two, while also synergizing with UG. Oakshade Stalker//Moonlit Ambusher is great in werewolf heavy builds and Sporeback Wolf provides solid defense for a few turns as a two-drop. Oakshade Stalker//Moonlit Ambusher is another solid werewolf VOW card that can drop onto the battlefield via Flash for an extra two mana.

From wolves and combat tricks to mana dorks and fungus, here are the 10 best Common and Uncommon Limited VOW cards.

Three-drop 1/4 creatures in Green that have Reach are a staple in the Limited format. Using the new VOW mechanic Training, Apprentice Sharpshooter is an upgrade to this staple, that serves as a valuable blocker and becomes an offensive threat the longer a match runs.

One-drop combat tricks are either hit or miss, with Massive Might raising the bar. Leaving one mana up to sneak attack an opponent with +2/+2 stats and Trample is huge, often leaving your opponent at a disadvantage when timed correctly. The Instant Green spell can also finish off an opponent if they don’t have a response.

Packsong Pup is a two-drop wolf that scales in power and toughness if you control another wolf. Outside of a build running at least six wolves/werewolves, the one-drop wolf is not a good card. Within the right shell, Packsong Pup is a powerful two-drop that not only applies pressure but Lifegain when it dies.

Able to draw a card upon death, Spore Crawler is a solid three-drop 3/2. It slots into all four archetypes with the color Green and has a solid power that makes for a decent trade when you block with it. 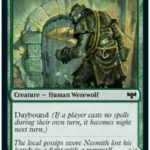 Hookhand Mariner//Riphook Raider has a solid front side as a four-drop 4/4. It’s able to make good trades as a blocker during the day while also applying pressure. And the werewolf’s value increases during the night with Riphook Raider, unable to get chump blocked by creatures with a power of two or less while charging in with a power of six. 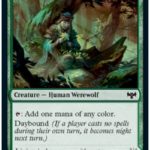 Able to slot into any of the four archetypes as a mana dork that can produce mana of any color is  Weaver of Blossoms//Blossom-Clad Werewolf. The werewolf opens the door for splashing, especially in the Sealed format, and increases its value at night by tapping for two mana of any color. Weaver of Blossoms//Blossom-Clad Werewolf can help you ramp into stronger creatures while also synergizing with the BG toughness theme.

Likely one of the best two-drops in Green is Reclusive Taxidermist. The human druid is a mana dork during the early game that turns into a serious threat once four or more creatures are in your graveyard.

The color Green thrives upon having big creatures within the Limited format that function as top-end finishers. Flourishing Hunter gains you life upon entering the battlefield and is a 6/6. It’s also a wolf spirit, synergizing with RG werewolves and BG toughness due to Flourishing Hunter’s ETB ability.

Beating out Flourishing Hunter as the best Common or Uncommon finisher in Green is Brable Wurm. It has a steep casting cost of seven but is packed with value that makes it worth picking up at least one copy in Draft. Mana dorks can help get Bramble Wurm out earlier, and once it does drop into the battlefield, it’s a 7/6 with Trample, Reach, and Lifegain. 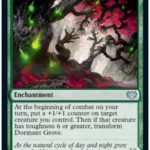 Synergizing with all four archetypes is Dormant Grove, an Enchantment that has the potential to flip into a 3/6 creature. At the beginning of combat, it adds a +1/+1 counter to a creature.