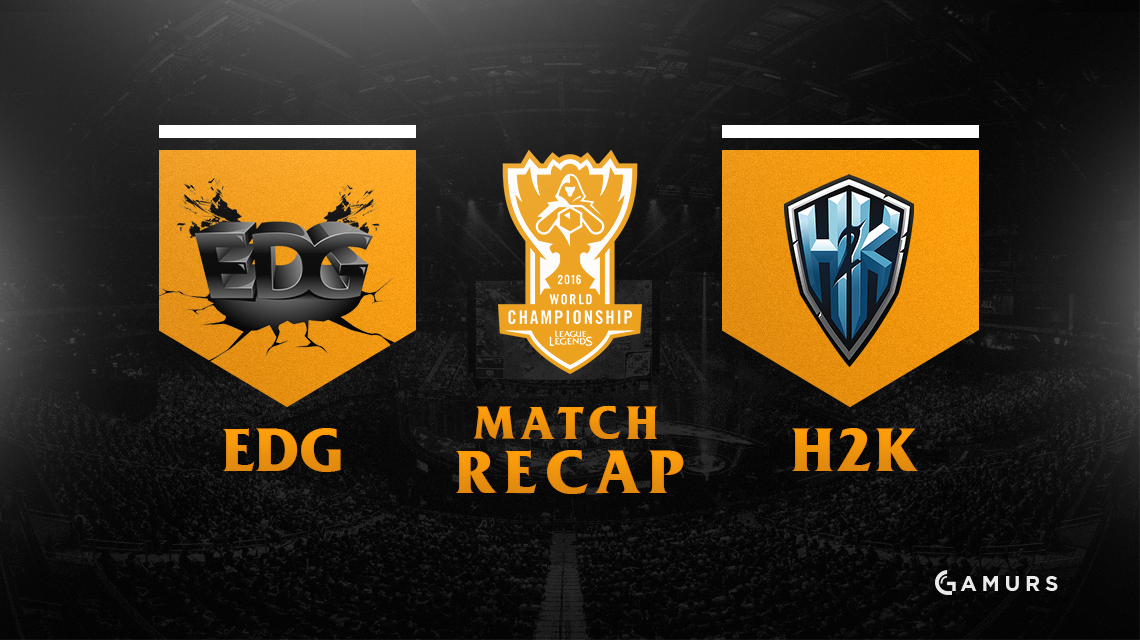 With both EU’s H2K and LPL’s EDward Gaming proving they are the best of Group C, they met one last time in groups to determine who will be first seed going to Chicago.

Knowing Jankos was on a strong early game aggressive jungler, they used him to punish the immobile Aurelion Sol. He was all over the map and kept using his ult to force summoners off the entire squad of EDG. To the surprise of H2K, EDG brought a five man dive towards mid lane to secure two kills. H2K managed to take an Infernal Drake and keep their gold lead at a solid 3k.

Both teams weren’t putting much emphasis on their bot lane matchup. Almost every fight left either PawN or Ryu having to use summoners in order to live. The game fell almost to a stalemate with teamfights resulting in zero deaths. However, much like the EDG vs. AHQ series, EDG started bringing the fire and despite being behind in gold, were finding picks left and right. PawN was 3/3/2 and became the key target for both teams to focus.

An explosive teamfight started mid lane, and since H2K managed to kill PawN early in the fight, they steamrolled through EDG getting an ace and picked up Baron. As EDG was respawning, they picked up their fourth dragon (3x Ocean, 1x Infernal) and started setting up the siege of EDG’s base.

Being 10k gold ahead and nearing full build on a strong scaling team, H2K should of been deep into EDG’s base, but ClearLove managed to get a clutch steal on Baron. With their new buff, EDG started to mount a comeback. However, H2K wasn’t having it. After countering EDG in every play after Baron, H2K made one last push into EDG’s base. After his entire team died, FORG1VEN made a huge 1v3 effort to secure the last hit on the Nexus to take the game.

H2K is now the first seed from Group C heading to Chicago, while EDG will be the second seed.