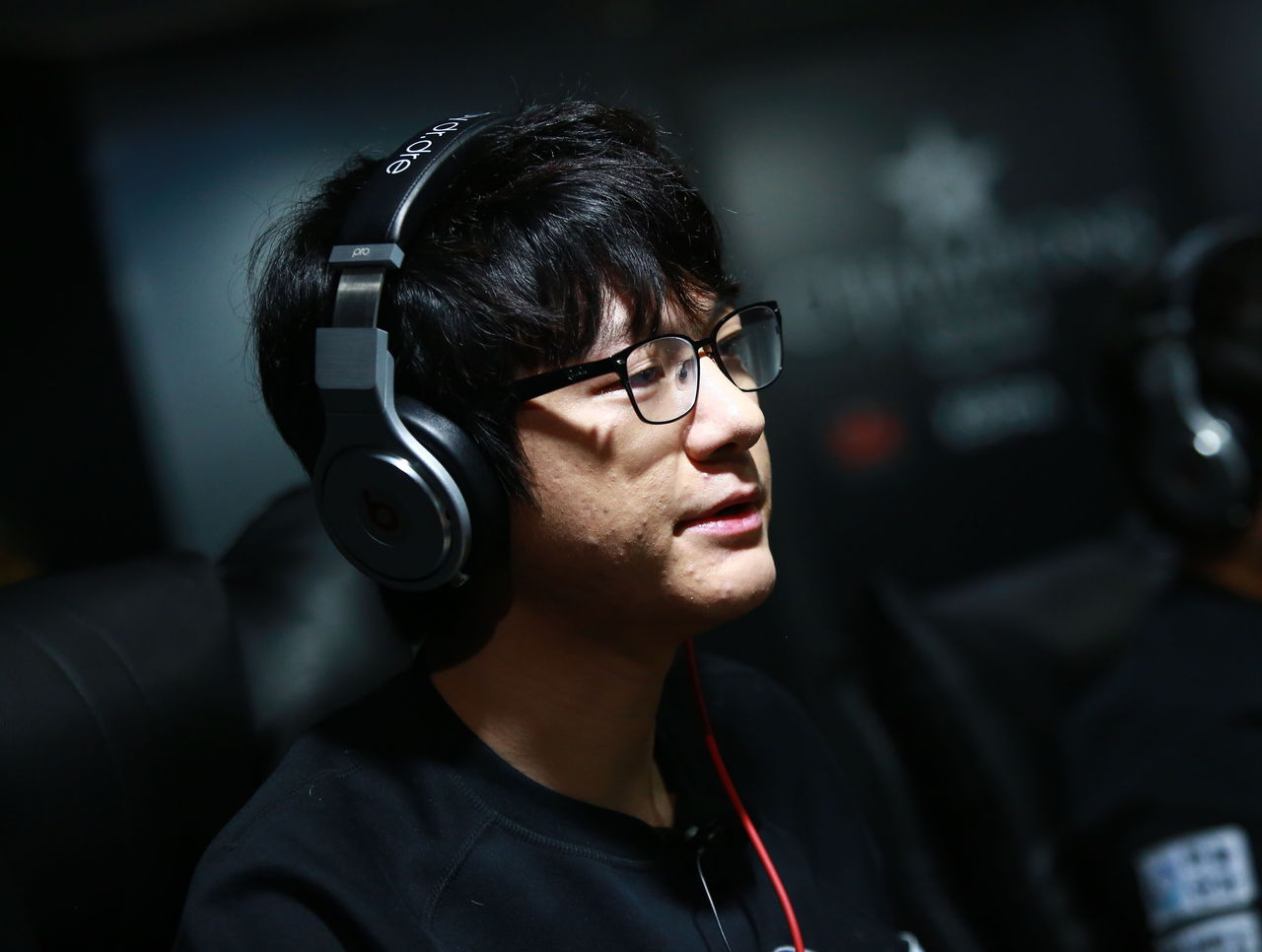 Today’s relegation of CJ Entus marks the seemingly definitiveend to Korea’s first League of Legends empire. When the CJorganisation acquired the Blaze and Frost squads, from Azubu, theyseemed practically assured more championships. While there would bevictories in competitions like IEM, WCG and NLB, the CJorganisation would witness only a single OGN/LCK finals appearancefrom one of their highly touted squads.

Still, many years of play-off appearances, including some deepruns and exciting matches, saw the success of the squads manifestin their longevity and consistently good level. As Blaze made thesemi-final of OGN Spring 2014, the mighty SK Telecom of 2013 hadalready begun its fall. For CJ, remaining on the brink of successwas their point of pride by now.

As if to mirror the theme of the names designating each team,the squads could not have been more different. The one similaritythey shared, particularly over the first year and a half, was ofbeing teams who excelled at late-game team-fighting and thusunderstood early on the value of picking scaling champions againstspecific opponents. Beyond that, they were polar opposites andtheir successes followed the different temperatures at which theyoperated.

Blaze line-ups were centered around the power of individualbrilliance, particularly in the solo lanes, as the likes ofReapered, Shy and Ambition transferred advantages gained alone intopowerful team-fighting. The most extreme varient of this approachwas the “sixth man” philosophy of the CJ Blaze team which finishedrunners-up at MVP Ozone in OGN Spring 2013. Giving up early dragonsto freeze lanes and funnel gold into their solo lanes, particularlyTop laner Flame, made that late-game Blaze team-fight nearunstoppable, as attested to by a 13 game winning streak whichfinished only in the final itself.

Blaze teams lived up to their name of getting very hot and tearingthrough competitions or fading when they could not meet therequired boiling point to break down the opponent. Despite being atop four level team in Korea for the first seven OGN seasons, theywould win only a single OGN title and reach the finals but twice.Their hot and cold nature is seen in their infamous poor record inblind pick games, where players can select any champion but with noknowledge of what the opponent has selected. Blaze squads won onlyone out of eight such games, seeing so many crucial series takenfrom them as a result.

Frost were also aptly named, as the squad employed its stars ina much more cool and collected manner. Shy and MadLife werearguably the best players in the world at their positions in late2012, yet they used their incredible skill-sets to facilitate theirteam-mates. Shy was the first Top lane monster to pack the arsenalof a hard carry Top laner and yet seemingly dedicate his entireapproach to masterful team-fighting. The young prodigy was the bestplayer on the team in a traditional carry role and yet playedwithin his squad’s system to marvelous effect.

MadLife was one of the best play-makers in all of League ofLegends, despite hailing from the role least suited to suchtheatrics at the time. While so many other Supports were low goldward-bots, whose job was to play Sona or Lulu, MadLife commandedfear from opponents for his otherworldly aptitude at landingBlitzcrank grabs and Thresh hooks. Most intimidating of allconcerning these champions was the Korean Support’s eerie abilityto land such skill-shots blind and once he had created such anopening, the knowledge that all of his team-mates would swarm uponit and secure an advantage for the team.

Frost was a team about knowing when and how you could win thegame. Minds like CloudTemplar and Woong understood the pick and banphase in a far more reflective manner than so many professionals atthe time. So often, they could select the champions andcompositions which would give Frost a chance to work victories outof nowhere over a long match or overcome some early advantage orstrength from the enemy. Frost’s calm nature under pressure andthis special understanding of champion select saw them wildlysuccessful in blind pick games, notably in contrast to their sisterteam. They won their first six of such matches, with their streakending with the Frost line-up being fielded by the CJ organisationin the semi-final of 2013’s OGN Masters competition, against anunderdog Xenics-OP.

While Blaze burned so hot and then flamed out on other occasions,Frost were a kingdom of ice early on and then saw a gradual climatechange slowly melt away their domain over the years. They played inthe final of their first four offline competitions, reached thefinal in six of the first seven and finish at least top four ninestraight times. They played in the first three OGN Champions finalsand reached at least the semi-final of the first six OGNcompetitions, including the early 2012 invitational. Startling, inlight of such excellence tournament in and tournament out, was thelack of trophies secured by the Koreans, though.

Despite those four straight finals appearances, Frost only tooktwo of those titles, winning the OGN Invitational and OGN ChampionsSummer 2012. The World Championship eluded them and NaJin Sworddenied them a repeat OGN championship. As the years went on, Frostcontinued to make deep runs, even as their recruitment processfailed them and their strength as a team faded. It wasn’t until thefinal season of OGN Champions that Frost and Blaze would finallyfail to feature in an OGN play-offs.

The dissolution of the sister team approach in Korea came to CJat the lowest point, having missed the play-offs with both squadsalready. Choosing Shy over Flame as their Top laner and puttingAmbition into the Jungle position, giving up players like Daydreamand Swift, eased the concerns of few fans. Lacking star levelplayers, but not names, the new CJ would manage one last hurrahwith their run in the first LCK play-offs, bringing theMaRin-infused SKT to their knees in the semi-final, but beingunable to close the deal.

Beyond that first split, there would never again be a moment inwhich CJ would legitimately look to threaten the elite teams forthe crown. In the Summer they managed a very solid third place inthe split, but failed to go deep in the play-offs. In 2016, therehas not even been a play-off berth earned by CJ.

Ambition was a troubled Jungler throughout his time, only to becast off to Samsung and find a rebirth of minor success there. Shycould not even retain his starting spot at all times, far from thereliable laner of old, and MadLife overcame a year which saw himseem close to retirement to again seem like a quality Supportplayer, but without the flashy and awe-inspiring style of old, nowa Braum, Alistar and Bard main.

Father time is unbeaten by any competitor in anydiscipline, as eventually all see their powers fade, theiraccomplishments less impressive and their careers come to a close.Yet the excellence of the brightest moments continues to shine outacross the ages, a beacon by which new champions are guided andfuture feats are measured. Every moment is eternal and memorytransports one back to that present. MadLife is still the playerfurthered ahead of all others at his respective role and dazzlingall onlookers with his superlative skills and intuitive creativity.Shy comes into team-fights with a masculine vigor which ensuresFrost always have a chance to secure victory.

Flame beats out another opponent by 100 minions killed and looksto power home a win for Blaze with an MVP performance. Ambition,old reliable, still finds his handful of champions on which he cancompete with any Mid laner anywhere in the world and Blaze willstill be in the game 25 minutes later.

The empire has ended, but its story endures.