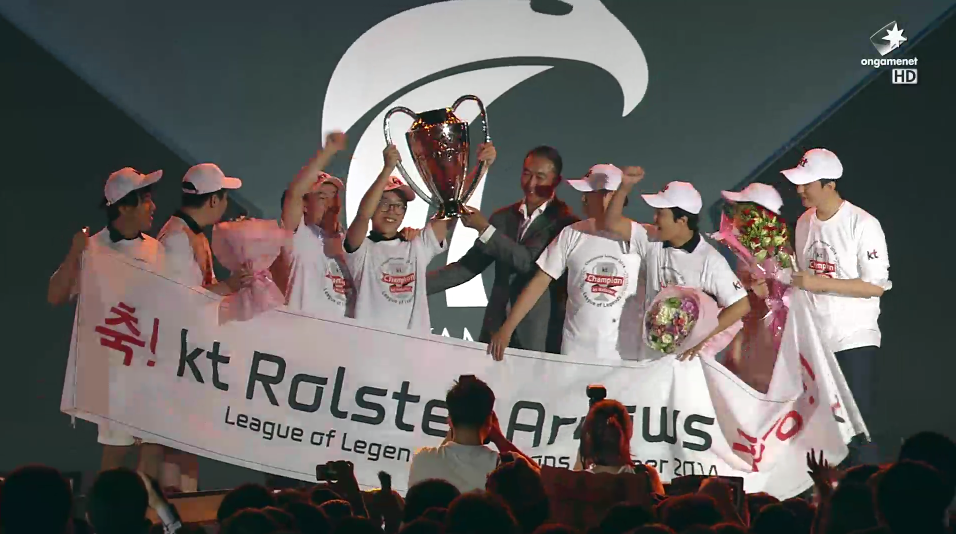 As the LCK Summer Split draws to a close, KT Rolster find themselves in a familiar position. Ending the split in second place after an unfortunate loss to SK Telecom T1, KT have locked a spot in the semifinals. One series away from the organization’s fifth summer final, KT will be hoping that history doesn’t repeat itself.

The last day of OGN Champions Summer 2014 had arrived, and in the middle of Busan’s popular Haeundae Beach stood Samsung Blue.

The kings of Korea at the time were looking to close out the season with their second OGN Champions win in a row, a feat only accomplished by SK Telecom T1 K. With an almost identical record to their spring season, they were easily on track to win back-to-back titles. Led by their general in the mid lane Bae “dade” Eo-jin, Blue seemed unstoppable.

Adjacent to Blue stood KT Rolster Arrows. A team of rambunctious young players, KT weren’t expected to be standing next to Blue in contention for a championship title. While Blue had the calm and reserved dade leading them, KT’s leader was boisterous jungler Lee “KaKAO” Byung-kwon. Despite his young age of 17, KaKAO had already become one of the best junglers in Korea, with only Samsung White’s Choi “DanDy” In-kyu as his equal. With a hyper-aggressive jungle style, KaKAO’s decision-making and early pathing was world class.

But against spring champions Samsung Blue, KaKAO and KT were the underdogs. “Literally everyone I talked to said Samsung Blue 3-1 or 3-0,” caster Erik “DoA” Lonnquist said as both teams walked over to their respective sound-proof booths. And realistically, this assessment was fair. Compared to KT’ risky head-first strategy, Samsung Blue played a much more methodical game, with arguably the best team fighting in the league. Samsung Blue were notorious for their ability to turn around games once the 35-minute mark hit, no matter the gold deficit they’d accrued.

After witnessing SK Telecom T1 K’s astounding reverse sweep victory in the summer finals a year before though, nobody could say victory was certain for any team. “How many finals have we had where everyone comes in thinking one team would win, and the other team takes it,” DoA said. “You just never know how these finals are gonna go.”

Once they had destroyed Samsung Blue’s final nexus, KT erupted in triumphant shouts, hugging one another. Night had come to Haeundae Beach over the course of the long best-of-series. In front of the roaring crowd that just witnessed their victory, KT were presented with a trophy that they could proudly call theirs.

They’d reached the top of Korean League of Legends. But they wouldn’t stay there long.

Fourteen days after their OGN Champions victory, KT faced off against Najin White Shield in the 2014 Season Korea Regional Finals. This match determined who would play SKT K for the final spot at that year’s World Championship.

Unsurprisingly, KT came into this Regional Finals match as the favorites. But unlike Samsung Blue, Najin could match KT’s early aggression. Preventing their opponents from finding considerable leads, Najin abused KT’s less than stellar macro play to the point where one of their victories took only 23 minutes.

Unable to qualify for the World Championship, KT’s season ended not with their spectacular victory over Samsung Blue, but being swept 3-0 by Najin.

In just 14 days, KT had dropped from the top. Soon after the Regional Finals, that year’s World Championship took place, and Samsung White became the Korean team fans fawned over. The KT victory in Haeundae Beach was nothing more than an afterthought to a community overcome with recency bias.

Another shot at summer

KT has since made every single summer final, but have yet to win another title. Almost exactly three years since their championship win, KT Rolster are ready to play in the 2017 LCK playoff gauntlet. Locked in the semifinal match, KT need to win just one more series to qualify for their sixth consecutive summer final.

No longer with the same five young players that stood in the finals three years ago, KT have enlisted the help of five veterans who fans have dubbed the “super team.” A team comprised of both LCK and World Champions like Song “Smeb” Kyung-ho and Cho “Mata” Se-hyeong, this iteration of KT are no strangers to success. Fielding a roster of players almost all considered top three in the region for their respective roles, this may be KT’s best chance to reclaim their short-lived title as “champions.”