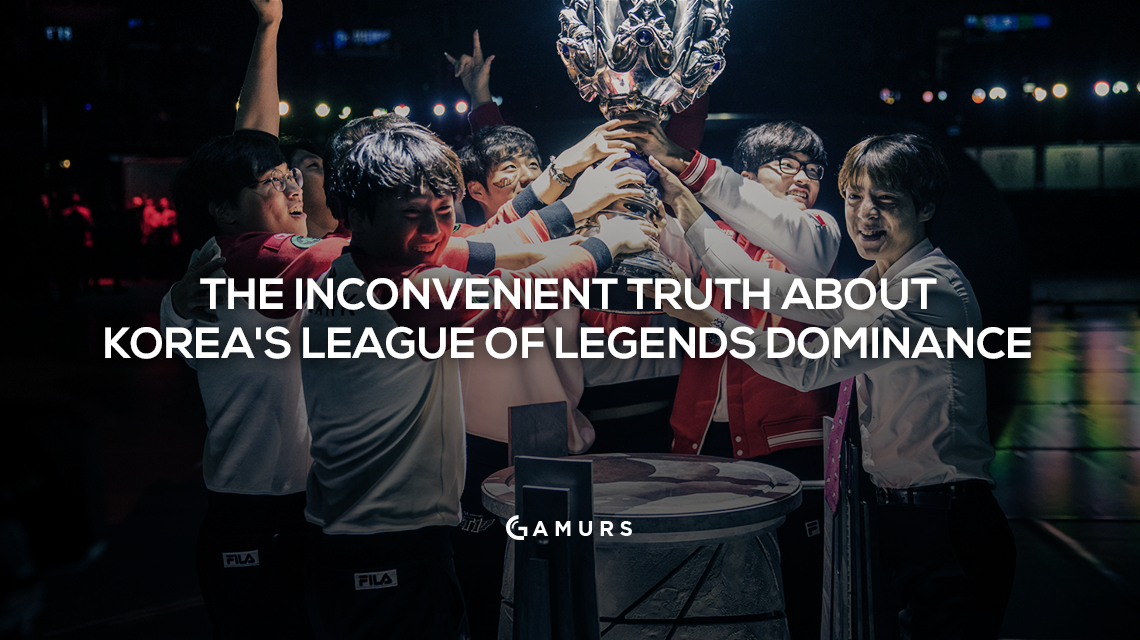 The gap between regions has become one of the most recurring topics in League of Legends. Whenever international competitions happen, we are bound to see plenty of pros, analysts and even journalists discussing the topic. While they all make valid and reasonable points, there’s a ridiculous dogma often spawning. That is, of course, the idea that Korean’s can’t just be better. Yiliang “Doublelift” Peng, just to cite an example, often repeated the idea that he was sure someone like Lee “Faker” Sang-hyeok exists in every region, he just needed to be found and nurtured in the right way. This is, almost certainly, completely false.

The Root of Greatness

Anyone pretending that personal gratification is the only motive to become excellent at any craft might need to revisit his idea of how people work. While it is true that mastering a skill gives a great sense of personal satisfaction, it cannot be ignored how big of an encouragement the social status we give to masters of that skill influences the work people put into it. Personal satisfaction is a feeling most of us look for, but so is admiration from our peers, and the increase in quality of both our lives and romantic partners available to us derived from it. Albeit much more complex, at its root, we are still in many ways trying to have the biggest antlers or the most beautiful feathers.

Perhaps the most obvious and close example is how many people want to succeed in the music and acting industry, more popular now than ever before. While it is true that money is a factor in this drive too, aspiring actors and musicians often dream of filling stages and appearing on movie posters, not as much of huge piles of cash. Plenty of careers exist that can guarantee good money making, but because of the lack of popularity they provide, they are cast aside by dreamers. Few children dream of becoming chairman in a big bank.

It’s not very hard to argue that gaming has a higher social status in South Korea than it currently has in the west. Truth be told, we’ve been recently catching up in that respect, but the difference cannot be ignored. This makes it so that a random talented individual might be more inclined to try to build on his gaming if he is South Korean, thus increasing the pool of talented players and overall gaming level. It’s not that Koreans as a race are superior, but rather that they have more incentive to develop gaming skills, even if unpaid. Clearly, the more talented people there are working to develop skills, the best the top players will be.

If the League of Legends scene keeps developing, and huge names like Coca Cola and other advertisers make bigger investments into the scene, the social differences in this regard will most likely disappear over the years. However, it’s no excuse to ignore it. It will be a road of many years until we reach that point, if we ever reach it, and it must be noted that current pro players grew in the society from 15 years in the past, meaning the social influence won’t catch up as fast as we would like it to.

Tied to the previous point, and even more influential, is the Cinderella law. Since 2011, this law forbids children under the age of 16 in South Korea from playing online video games from 12:00 a.m. to 6:00 a.m. This is not creating the talent gap, it’s rather a sign of why the talent gap exists. When such a law has to be enforced, there is no denying that Korean children expend massive amounts of time gaming. Surveys show that Korean children between the ages of three and nine expend as little as 34 minutes outdoors on average per day.

We cannot deny how much early age learning conditions affect people and how crucial this is for talent development. Although anecdotic, a good example of this phenomenon is László Polgár, chess teacher and educational psychologist, who raised his daughters attempting to make them into chess geniuses. Casting ethical conundrums aside, two of them ended up becoming the best and second best female chess players in the world, and while this could be a coincidence, it is hardly a defensible position.

The idea is that talent is not an immovable monolith assigned at birth. Some examples of this idea exist, of course, varying from field to field (Usain Bolt would be a great example of this kind of talent), but often times what is taken as talent is the result of hard work, especially during the early stages of development. Usually, stories about child geniuses will have them obsessing over certain topics in their infancy, and even when we cannot differentiate between these actions creating talent in the child or being the result of innate talent, we now know that at least part of it is talent growing activity. Having this information in our hands, and changing our perceptions of what we refer to as talent, we now may argue that adult Koreans, while not having any proved genetic advantage, can have more talent.

With South Korean children experiencing many more hours gaming each day, the affirmation that Koreans cannot be more talented becomes ludicrous. Their social dynamics and childhood upbringing make it so that the average adult Korean gamer will be more talented than the western gamer, just by the sheer amount of work he puts into it during his infancy. The burden of proof relies upon those who, assessing the gap problem, don’t want to face the facts and choose to ignore that the talent gap exists, with no indications of this idea whatsoever.

This is, honestly, a distance I would not want to see closed. I would much rather lose every international competition than have our children lose on outdoors time, since physical activity is proven to be such an important health factor as more studies are conducted on it. However, the statement that playing video games is bad for personal health doesn’t mean it won’t rise the gaming level, especially since pro players retire young, and will never see the physical effects of their upbringing during their careers.

It is not the point of this article, nor my personal belief, that the talent gap is the only reason why Koreans stay so far ahead of the other regions. The harsh truth that underlies is that the current idea of catching up is not possible as a plan to bring the west to victory. Even if westerns can catch up in mechanics, because of the talent gap, the Koreans might be investing far less time in mechanics than westerners have to, giving them more training attention to strategy, macro and other factors surrounding the game. For us to take over Koreans and beat them, we need to find and develop some areas or skills in which we surpass them, or in the end, the talent gap will still bring us to our knees.

Do you have any opinions regarding the gap between Korea and the other regions? Let us know at @Cabramaravilla and @GAMURScom, we are always thrilled to hear from you.