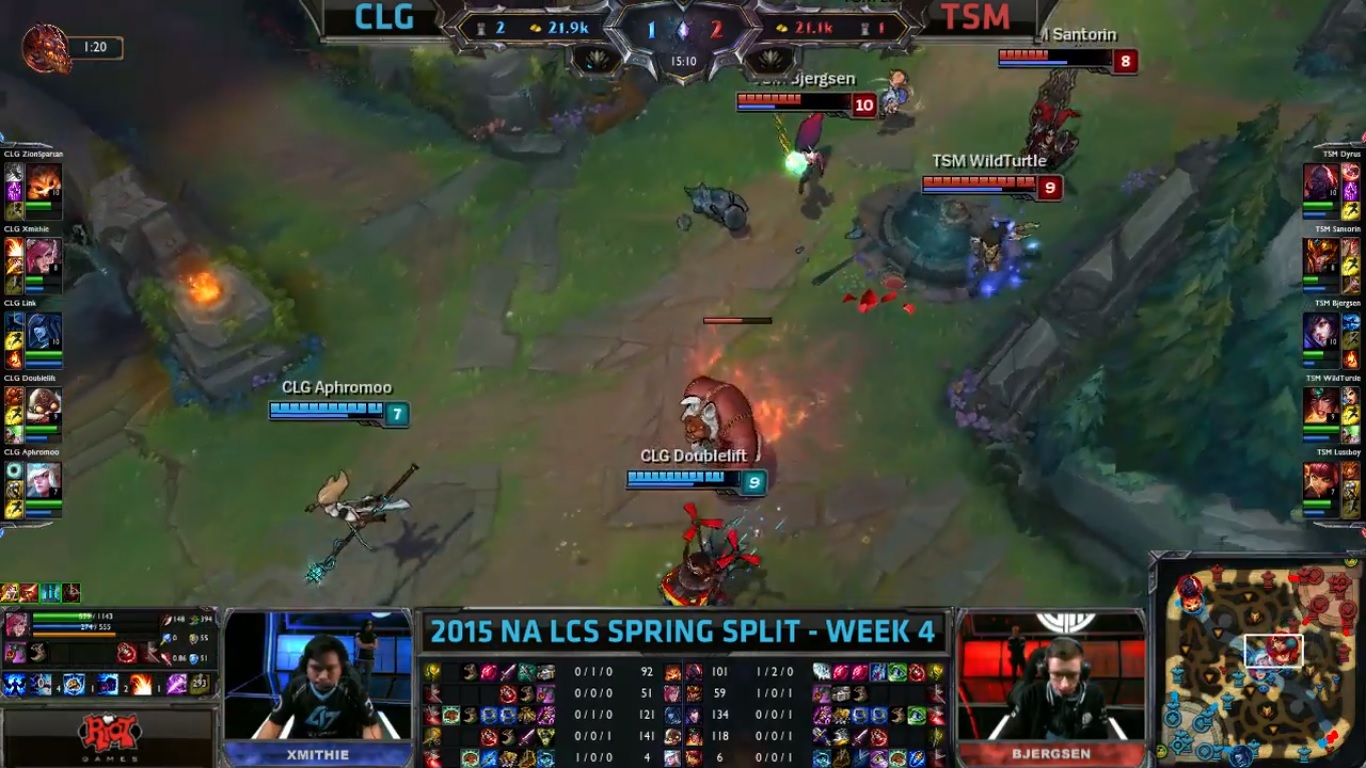 Marquee regular season games are a big part of sports leagues; in a setting without constant tournaments, these high profile regular season match-ups between championship contenders provide crucial flavoring and storyline development during a long season. Today’s heavily promoted LCS match between Team SoloMid and Counter Logic Gaming was no different. With both team owners joining into the fun and Riot pulling out all the stops for the event, game viewership peaked at over half a million viewers. Best of all, the game itself delivered on its massive promise – a back and forth game from both teams resulted in a come from behind TSM win after crucial misplays from CLG’s carries.

This brings me to my next point: as great as that game was, it also left me (and possibly many other fans) somewhat disappointed. While TSM’s win was very well-deserved, the close nature of the game meant the win was far from definitive. Unfortunately, we’ll have to wait a full 5 weeks before we can see these two teams play again. There’s a strong case for the LCS moving into a Bo3 format, and TSM vs. CLG just provided a further argument. I wanted to provide my thoughts on the pros and cons of switching to a Best of 1 format.

Disclaimer: I’m making this suggestion purely based off of what I think would be a better hypothetical format. I don’t know very much about Riot’s infrastructure or costs, but it seems like this wouldn’t be a big cost issue for them, as they own the studios LCS is broadcast in. If anything, it would raise revenues from more ticket purchases due to more live events.

I recommend that Riot moves away from stacking up Bo1 games at the end of the week for the NA and EU LCS. Rather, the LCS games could be spread across the week with marquee games being played at prime time over the weekend (a system similar to what NBA basketball employs.) For example, rather than playing 5 games on Sunday, Riot could instead broadcast two Bo3s, one between North American top teams and one between European top teams. Other games would be scheduled at good times on the weekdays.

There are several important benefits to a stringent regular season format, both for organizers and for viewers. With automatic relegation coming for the team with the worst regular season performance, regular season results, even for teams at the bottom of the table, have become much more important. A regular season that does a better job of determining the worst LCS team will play a big part in  raising the quality of the league.

Similarly, simply having top teams play Bo3s will boost the number of exciting games played in the LCS! (I will discuss the counterpoint to this, Bo3s from weaker teams, later on in the article.) Having more high quality competitive games spaced around the weekend can draw more fan interest and increase the quality of the league by giving the top teams preparation for the “Best of X” formats used in tournaments.

Finally, Best of 3 matches are in and of themselves more competitive than Best of 1s. Traditional sports often feature many in-game adjustments from top coaches. While League of Legends rightfully does not allow coaches to participate in in-game discussions, the back and forth battle in both picks and bans and in-game adjustments is something that would allow interesting back-and-forth battles between teams. Allowing teams to make immediate adjustments between matches is much more competitive than seeing how the teams match-up again a whole 5 weeks and multiple patches after.

Because Best of 3’s do a much better job of definitively stating which team is better, it also allows for far superior regular season storyline building. Today’s back and forth game between TSM and CLG provided a great example of this. Much of CLG’s early game was won by incredible rotational play as well as smart individual moves from Zion and aphro (in particular, it looked like TSM struggled to deal with Zion’s Frozen Mallet buy.) Eventually, TSM won the game off the back of superior teamfighting and several poor plays from Link and Doublelift.

Moving away from the game, we were able to take many interesting storylines. It looked like Link still struggled under pressure as the game tightened up, with some large misplays on his Lissandra ultimates. Some other possible storylines include the importance of Zion’s pick-up, just how much better than the other mids Bjergsen still is, Santorin’s emergence as a truly elite role-player, and many others. However, because of how close the game was, none of these storylines are stated as definitively as they could have been.

What if Link turned things around in Games 2 and 3 and demonstrated his growth under pressure? As a Doublelift fan, I would have loved to see him redeem his poor performance. As a fan of greatness, I would have loved seeing Bjergsen stepping on CLG, piloting TSM to an easy win in game 2, and re-iterating his unrivaled brilliance. Even the storylines that were established in the Bo1 series could have been made stronger and much more impactful in a Bo3!

One of the biggest arguments against Bo3 is that a Bo1 setting appeals more to casual fans. There is probably some truth to this, but at the same time I’m not sure if that is true. With so many fans tuning in for this  game, turning it into a series could have only been even better for the fans. LoL originally burst into popularity during Season 2, a time when teams almost exclusively played Best of 3 in tournaments.

In addition, there are benefits to a more upset-happy format, which does create interesting storylines in their own right. T8’s triumph over TSM on the back of Slooshi’s Orianna and Gravity’s surprising win over C9 were some of the most exciting games of the first weeks of LCS. However, as hinted at earlier, an upset in a Bo3 format generates a much more compelling storyline than a shocking win in a one-of game.

Last of all, I think that Bo3 games will raise the overall quality of the league. While it’s true that there have always been some disappointing games between the bottom teams, playing them in a Bo3 format is simply the best way for them to improve! In the meantime, these Bo3 series won’t hurt fans. Fans of bottom-tier teams can still cheer them on in their series and uninterested fans can simply skip their games. On the other hand, playing in a Bo1 format does not allow fans hoping for Bo3s to watch more games.

Most bottom-tier teams won’t get the chance to play Bo3s in a tournament setting, and implementing them into the LCS can give several teams more stage experience in higher stakes games. In addition, many of the LCS’s lower-tiered teams this season have one or two serious issues that they need to iron out. Oftentimes, these issues aren’t able to be fixed in scrims, and playing Bo3 gives them more time to fix these problems.

Overall, I think a Bo3 format would both improve the viewership experience and the league itself. This is my first time writing about a league related issue rather than my usual articles, so please give me feedback!