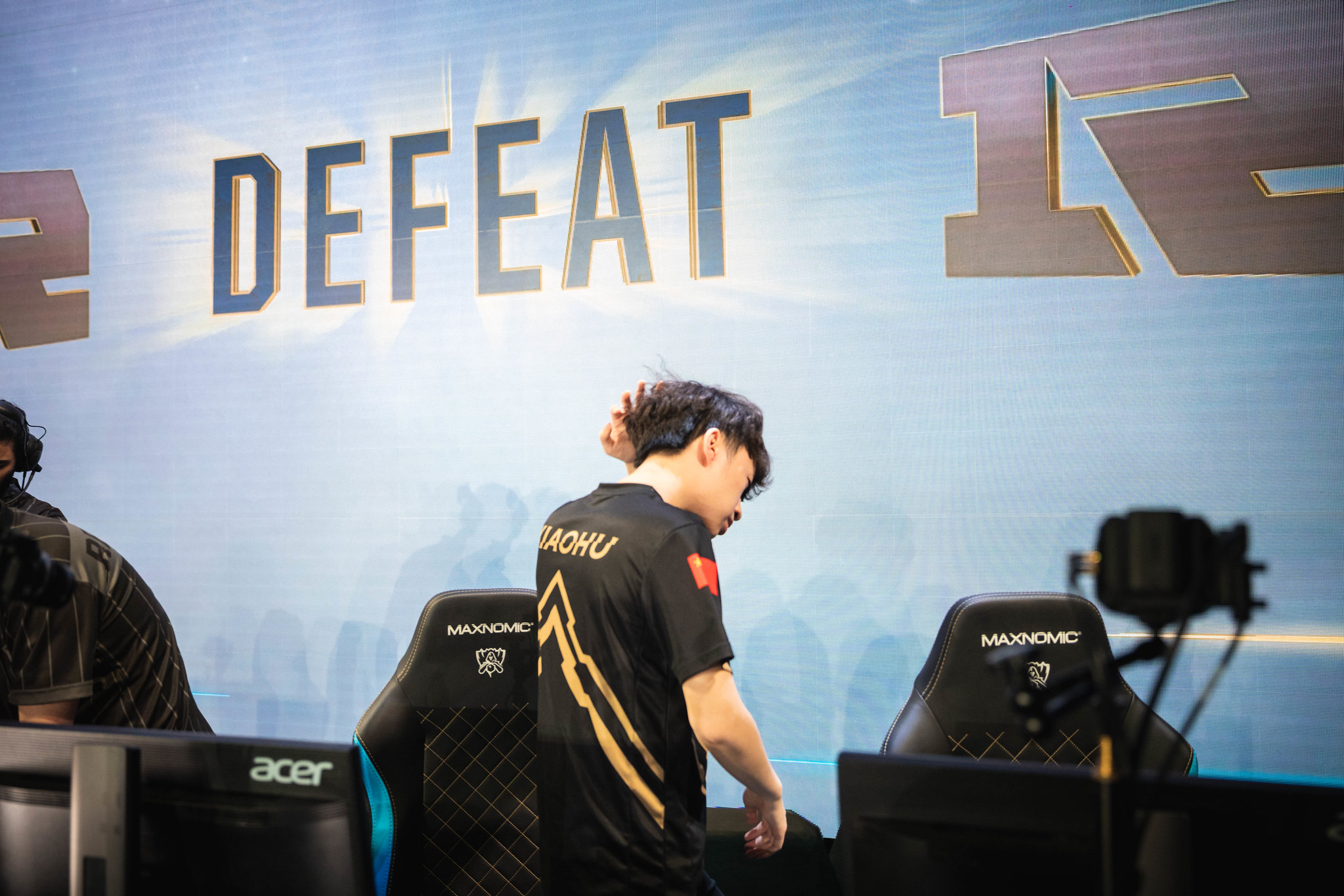 It’s been a long time since Royal Never Give Up, one of the LPL’s most storied organizations, has tasted blood on the international stage.

In 2018, they were considered one of the greatest League of Legends teams in the world. RNG looked unbeatable, winning the Mid-Season Invitational to bring the LPL its first international victory in three years. Superstar AD carry Uzi was at the top of his game—boasting the highest of many stats at MSI 2018, including KDA (8.6), total kills (104), CS per minute (12), and damage per minute (742)—and was widely considered by many to be the best player in the world that year. Everything was coming up roses for RNG. All they needed was a victory at the World Championship and they’d have a neat capstone on the organization’s most successful competitive year of all time.

In the run-up to the 2018 World Championship, the community watched RNG’s every move with the utmost attention. They faltered for just a moment in the regular season of the LPL, finishing in second place behind Invictus Gaming. But they quickly found their footing again, losing only four games in their playoff run. Two of those games came in a nail-biting five-game series in the finals against Invictus Gaming, but RNG secured their spot as China’s No. 1 seed with the expectations of their region resting firmly on their shoulders.

But it was at that World Championship where they crumbled, taken out by G2 Esports in the semifinals in what is widely considered one of the most historic upsets of all time.

Since that moment, RNG have struggled tirelessly to find their identity once again. They’ve toiled through years of underperformance, barely qualifying for the 2019 World Championship and failing to even make an appearance in 2020. It looked as though the abrupt end to their 2018 dream had broken the roster’s spirit.

And now, after three years, the team has qualified for MSI 2021. Their roster looks a lot different than the group of players that stormed MSI in 2018, but their goal is the same. This team wants to win, but can they break their international curse?

The changing face of RNG

It’s a huge loss for any team to lose their franchise player—even more so when that franchise player is one of the most iconic faces in League history. Last June, RNG’s AD carry Uzi retired due to severe health issues that plagued his career. Of his eight years competing in the LPL, four had been spent at the helm of RNG. The team’s identity had been built around his hard-carry style, with RNG’s laners famously serving as secondary supports for picks like Vayne and Kog’Maw.

He’d been taking frequent breaks from the RNG starting roster to try and manage his myriad of medical conditions, relying on substitute Betty to fill in for him. After his retirement, RNG chose to bring in ADC Gala from Dominus Esports rather than continuing to use Betty in the starting lineup. Gala was set to replace one of the greatest players of all time and he’d be doing so with barely three years of major region competitive experience under his belt.

After Uzi’s departure, the team’s identity had to change. During the 2021 offseason, the team acquired jungler Wei and moved substitute mid laner Cryin into a spot on the team’s starting roster. He took the place of veteran Xiaohu, who surprised the competitive world with a role swap to the top lane. Ming and Xiaohu were now the only two players left from that fated MSI roster.

Although responses to the changes were mixed, especially with Cryin and Xiaohu being such untested elements in their respective lanes, RNG quickly proved they meant business this spring. They lost only two games throughout the course of the 2021 LPL Spring Split regular season to Bilibili Gaming and JD Gaming and it looked as though it’d be smooth sailing through the playoffs and into their MSI spot.

As is always the case, though, it wasn’t that simple. RNG faced FunPlus Phoenix in the fourth round of the playoffs, where they lost 3-0 and were catapulted into the losers bracket. It took two incredibly close five-game series to land them their finals spot, where they faced off against FPX once again. This time, the cards fell in RNG’s favor and they took the series 3-1.

Nobody does diversity in the top lane quite like an off-role mid laner. Throughout the course of the spring, Xiaohu played 15 unique champions and fulfilled multiple styles for his team. His most-played champ has been Gnar with 14 total games and the duality of Gnar’s playstyle is a perfect metaphor for Xiaohu. He can be both the carry and the support, the engage and the follow-up. He’s played everything from Syndra and Ornn to Tristana and Malphite—and his champion pool shows no signs of shrinking.

Mid laner Cryin’s champion pool is the perfect complement to an aggressive top laner. He’s the master of wave clear, zone control mages like Orianna and Viktor. The ability these champions possess to create space in teamfights perfectly sets up his team for advantageous engages.

The greatest strength of RNG, and perhaps the biggest stylistic change on the team, is that they don’t rely on a single player as their carry. Every role is able to step up and take on the responsibility of the game when necessary and the kill participation of each player is at least over 65 percent, according to Games of Legends. No one player takes an overwhelming amount of the team’s resources and top, mid, and bot have all had their fair share of pop-off games. After playing through Xiaohu for most of the regular season, RNG made a shift in the playoffs to a bottom-lane-focused style and found just as much success with an alternate carry in Gala.

It’s not just the carries who are proving their worth on RNG, however. The pairing of jungler Wei and support Ming has been terrifying when it comes to seeking out fights. Ming favors tanky, engage champions like Rell and Alistar and he’s a terrifying sight when barrelling toward you on the Rift. Wei’s creative pathing allows him to be consistently present for objective fights and his preference for Chemtank champions like Udyr and Hecarim allows him to speed into teamfights right alongside Ming.

How will they match up against the world’s best?

The LPL as a league is so wildly variable that it’s often difficult to know how LPL teams will match up against specific playstyles at international events. Although it’s an unfair stereotype that all the LPL’s games are constant fiestas of teamfighting with no macro decision-making, it’s undeniable that the LPL is one of the bloodiest regions in the world. It’s a region famous for incredible comebacks from ridiculous gold deficits and a region in which a game is truly 50/50 until the Nexus finally explodes.

That being said, RNG had the most kills of any team in the LPL playoffs at 276 and they got those kills despite being, on average, at a gold deficit to their opponents, according to Oracle’s Elixir. That’s the only statistic in which they topped the charts in the LPL playoffs.

Their dragon control is average and their Baron control is good, but with their games averaging 31.8 minutes, they don’t have much opportunity to use Baron buffs. Their strength clearly comes from their teamfighting, but don’t let that fool you into thinking that their macro is sloppy. The way in which they manipulate their side lanes to maximize Xiaohu’s potential is stellar and the early map movement of Wei and Ming together is a fantastic example of support/jungle cohesion.

It’s almost a complete certainty that RNG will make it out of their group. With VCS representatives Gigabyte Marines unable to attend MSI due to COVID-19 restrictions, RNG will have one less team to beat to make it out of Group A. If they can take down the Unicorns of Love and Pentanet.GG, they’ll have the chance to face off against the best teams in the world right now. But those teams are a set of organizations that they have very little experience playing against.

A lot has changed during RNG’s hiatus from the international stage. Their famous nemesis G2, the team that put a stop to their 2018 miracle run, is no longer the de facto representative of the LEC. But MAD Lions are their younger, wilder cousins and will be a fascinating matchup for the LPL’s representatives. Purely based on player experience, the matchup against MAD should, in theory, be in RNG’s favor. The only possible area in which RNG could fall would be the mid lane and Cryin’s resilience on safe laning champions should be able to hold out against any number of ganks that Elyoya throws his way.

The LCK’s old guard is dead and gone, but in their place wait DWG KIA, the methodical menaces who will undoubtedly be RNG’s most challenging matchup at this tournament. Khan’s top lane champion pool is just as deep as Xiaohu’s and DAMWON’s bottom lane are almost completely unexploitable. RNG’s only option will be to create a little chaos: Think early lane swaps, creative pathing into unpredictable ganks by Wei, or some good old-fashioned flex-pick shenanigans in the draft.

This MSI will be a challenging one for RNG. Many fans were expecting the LPL’s representative to be ex-world champions FPX. Instead, it’s Royal Never Give Up, the once-great kings, sitting in the ruins of an empire that many thought they could never rebuild. Uzi’s retirement left a gaping hole in the heart of the organization and a domestic victory this split has begun to stitch that wound back together. A victory here, on this international stage, could truly bring RNG’s legacy into the new age of League—an age in which the LPL has crowned itself the upstart king of the competitive world.