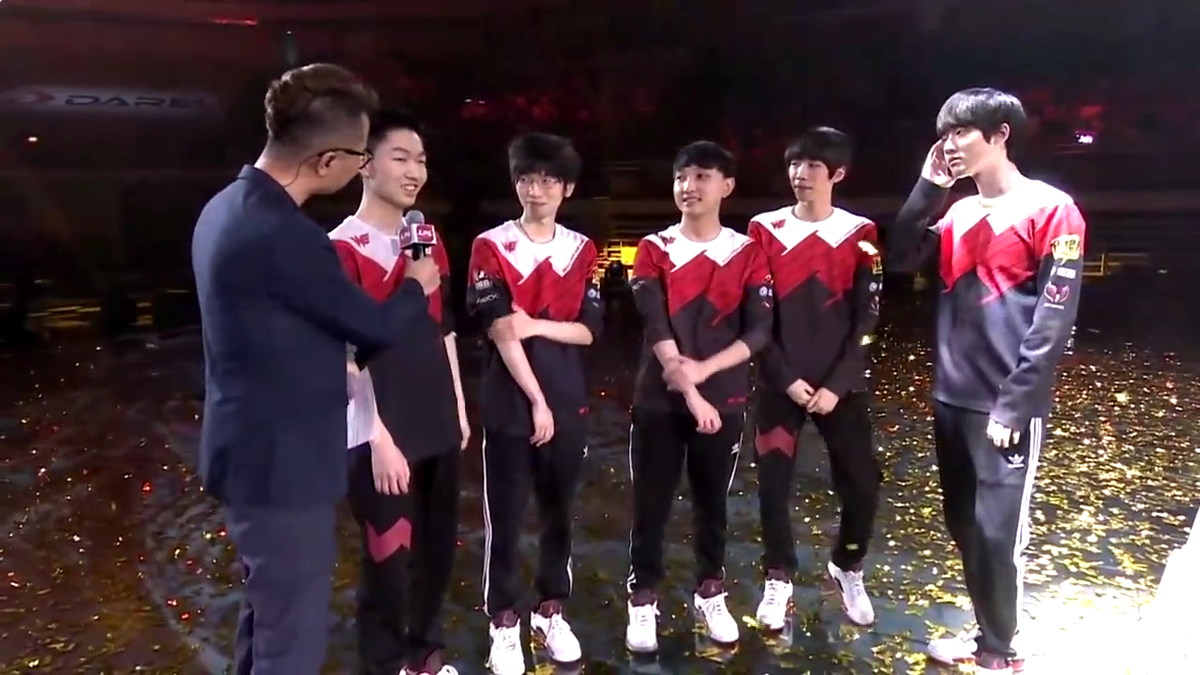 Team WE stepped onto the Spodek Arena to face TSM in the finals of IEM Katowice in March, 2015 as an underdog.

The 10th-place LPL team at the time, WE—playing against the top teams of Europe, North America, Taiwan and Korea—was never expected to make it to the finals. But as the tournament progressed, WE continued to amass wins, beating both Gambit Gaming and CJ Entus to advance into the bracket stage.

In the semifinals, however, WE was matched against the GE Tigers, Korea’s No. 1 seed and the tournament favourites. WE shocked the Tigers and the viewers at home, beating them 2-1. But the Chinese team weren’t able to complete the cinderella story, as they lost the finals to TSM 3-0.

Now, two years later, the once 10th-place team have become the LPL champions. In a 3-0 sweep, WE convincingly beat Royal Never Give Up to earn the 2017 Spring Split crown. With that crown comes a ticket to the Mid Season Invitational, one of the two big international tournaments of the year.

After a two-year hiatus, WE will make their return to international play. But unlike at IEM Katowice, WE head into MSI not as underdogs, but trophy contenders.

The only two members of the current WE roster to have attended IEM Katowice, both Su “xiye” Han-Wei and Jin “Mystic” Seong-jun have grown exponentially over the past two years.

Arguably the best mid laner in China alongside RNG’s Li “xiaohu” Yuan-Hao, xiye heads into MSI with little notoriety among Western fans. Against Luka “PerkZ” Perković, Huang “Maple” Yi-Tang, Søren “Bjergsen” Bjerg, and Lee “Faker” Sang-hyeok, the stars of their respective regions, xiye will have a tough time trying to shine at MSI. And considering his more supportive roaming playstyle, xiye will be hard pressed to make plays on Karma, a champion he played almost exclusively throughout the LPL playoffs.

Mystic, on the other hand, should have no problems standing out at MSI. The main star of WE, Mystic is usually who WE play around. Put on scaling champions like Ashe and now Kog’Maw, Mystic can carry late-game teamfights. A top performer in the LPL, Mystic will get his chance to once again prove himself internationally, facing the likes of Bae “Bang” Jun-sik, who many believe to be the world’s best AD carry.

One of the biggest questions for WE coming into MSI is whether they will hold the same affinity for Kog’Maw.

LPL teams during playoffs had a strange obsession with Kog’Maw. While other regions picked Ashe, Varus, and Caitlyn, China prioritized Kog’Maw, a champion which, aside from LGD’s Gu “imp” Seung-bin, was barely used prior to the LPL playoffs. Out of the 31 games that took place during the LPL playoffs, Kog’Maw was either picked or banned in 23 of them.

And out of the eight LPL teams in the spring playoffs, WE used Kog’Maw the most, picking him whenever available. A champion that can easily carry a teamfight past 20 minutes, Kog’Maw was the perfect champion for WE, who relies on Mystic to win.

It will be interesting to see if WE will pull out the Kog’Maw against their international competition. It would amazing to see WE be the catalyst that makes Kog’Maw a top-tier pick globally, similarly to the ROX Tigers with Miss Fortune back at the 2016 world championship.

While Mystic and xiye already made a name for themselves IEM Katowice, MSI will be Xiang “Condi” Ren-Jie’s first international event.

An aggressive jungler, Condi loves to invade the enemy’s jungle early into the game, with or without vision. Sometimes his invades work, which then allows him to take over the game. But other times, Condi gets caught way too deep in the enemy jungle, forfeiting first blood.

Funnily enough, Condi is not the only jungler at MSI to have this playstyle. Both SK Telecom T1’s Han “Peanut” Wang-ho and TSM’s Dennis “Svenskeren” Johnsen share this risky jungle aggression. There’s no doubt that when these three meet on the rift, constant fighting will ensue. It wouldn’t be surprising to see these games won or lost solely on early jungle pathing.

But if Condi can come out ahead, like he did against RNG at the LPL finals, WE will be able to go far at this year’s MSI.

Watch out for WE in the coming days. The once best team in the world back in the days of IPL Five are finally looking to reclaim their crown. And although they probably won’t win this this year’s MSI, this tournament could be the launching pad WE need to reach the elite status the organization once held.