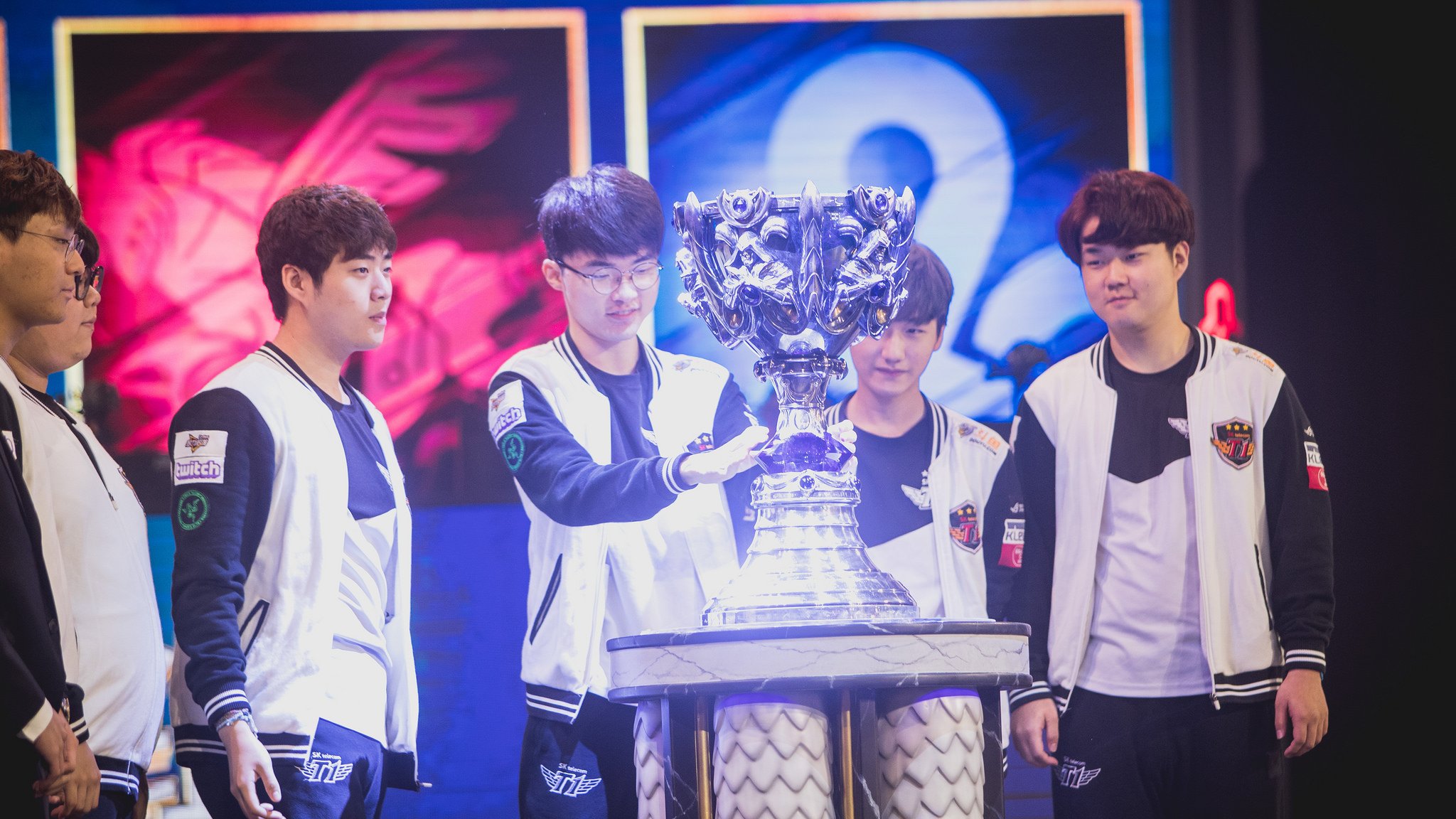 For much of its competitive history, SK Telecom T1 has only known success.

Since winning Worlds in 2013, SKT have gone on a tear behind the superb talents of Lee “Faker” Sang-hyeok, one of the greatest players in esports history. Over the past two years, Faker’s been joined by a solid bot lane of Bae “Bang” Jun-sik and Lee “Wolf” Jae-wan that has more than held its own in Korea and abroad.

But there are two places where SKT keep tinkering: top lane and jungle. With some downtime between splits—SKT are out of MSI for the first time—SKT are looking for new players at these positions once again.

What exactly has gone wrong and what is the team looking for heading into the summer split?

Since that first Worlds victory, top lane has been a virtual carousel. The team has cycled through new players every year, from Jeong “Impact” Eon-yeong to Jang “MaRin” Gyeong-hwan to Heo “Huni” Seung-hoon. With each of these players, SKT has tried to rediscover what it had with Impact in 2013. For those that only know Impact from his recent days in the NA LCS, he was a fearsome split pusher in Season 3.

MariN came in afterwards and added a shot-calling element that Impact couldn’t provide. But a lot of those calls were for mid and jungle to roam top and get MaRin ahead so he could split. The story has been the same ever since. Lee “Duke” Ho-Seong, Huni, and their most recent pickup, Park “Thal” Kwon-hyuk, are all split pushers at heart. It’s less a revolving door and more a carousel that goes ’round and ’round.

The problem for SKT is that the game has evolved beyond its 2013 strategy, and it’s getting harder and harder for them to adjust. Sure they won their last Worlds title with Duke splitting to the enemy nexus, but it was perhaps the weakest we’d seen from an SKT championship team.

Of course, if you have seen any of Huni or current starter Park “Untara” Ui-jin’s teleport plays over the past couple of seasons, you too might be tempted to tell them to stay top and just split. Those plays have often caused more problems than they’ve solved. But again, that style just doesn’t work anymore. SKT have shown that their four man unit is unable to consistently stay safe without the top laner present.

The solution is a shift in thinking. Few top laners in the world can get away with what Longzhu’s Kim “Khan” Dong-ha does, picking carry champions and dominating his matchup. As much as it may pain to say, what SKT really need is a strong tank player with a keen sense for teleport timings and initiations.

That may make them more predictable, but it will also help them become more consistent. And consistency has been a struggle for this squad for a long time now.

In contrast to top lane, jungle used to be a castle held down by veteran Bae “Bengi” Seong-woon. As Bengi started to age and his champion pool fell behind his contemporaries, SKT looked to replace him. But every year Bengi would return, often triumphantly, and save SKT when it really mattered.

It wasn’t entirely unexpected when Bengi announced his retirement a season ago, but it was different for SKT not to have their veteran in the room with them, even if it was just as a supportive voice. SKT quickly picked up talented youngster Han “Peanut” Wang-ho, and all seemed well.

But it wasn’t. Peanut never fully fit in, and the team couldn’t use his talents consistently. They rotated him and Kim “Blank” Sun-gu in and out of the lineup last year to varying success. But when things got tough in the Worlds final against Samsung, neither jungler could keep pace. With Bengi gone, the floodgates opened on SKT’s jungle.

Blank is still with the team and he’s still getting dominated in important matchups. Long gone are the days of the 20-game win streak from last summer. He’s susceptible to early game pressure and, while he’s settled into the role of warding river for Faker and being used as a vision bot, that gives up too much pressure to opposing junglers. There’s a reason SKT’s control of the jungle fell off a cliff this last split.

A major reason SKT wants pressure in the top lane is because the bot lane exerts no pressure on their own. Bang and Wolf traditionally play to farm and are very weak to strong engage. A tank top threatens to cede two losing lanes, a tough situation to recover from. We never see SKT try four- or five-man coordinated plays in the duo lane in a bid to gain first turret or drake.

The answer could be to a more aggressive jungler who camps for the duo lane. In contrast to top lane, the answer may already be on the roster. The team signed Park “Blossom” Beom-chan straight out of solo queue last offseason, and in his rookie split, he looked pretty good. Sure, he fed his ass off at times, but he gave the team a much-needed kick in the pants.

It was disappointing then to see him get shelved for Blank come playoff time. SKT are a proud organization, but the odds of them winning the Spring playoffs were incredibly bad. Why not see what the rookie can do in a best-of-five scenario? Sure, Blank’s win over KSV gave them some Championship Points for Worlds qualification, but was that worth heading into the summer with continued uncertainty at jungler because they don’t know what they have in Blossom?

Is patience a virtue?

Of course, it’s a bit naive of anyone to question what SKT is doing. They are the most successful franchise in the sport, after all, and head coach Kim “KkOma” Jung-gyun is a masterful tactician.

But it’s been a long time since we’ve seen SKT truly dominant in either their region or internationally. And with more roster changes potentially on the way, it may be another split or two before they even know where to start building from. It’s tough to see them missing from MSI for the first time ever, but it would be an even bigger hit to competitive League if we didn’t see them at Worlds.

Still, it’s useful to remember that SKT have been down like this before, and have come back each time. They missed Worlds in 2014 after Impact left, and responded with two straight championships the next two seasons. Faker and Bang are still at the top of their game, having survived all sorts of metas and teammates alike. Maybe patience is all this team needs to look like the SKT of old again.