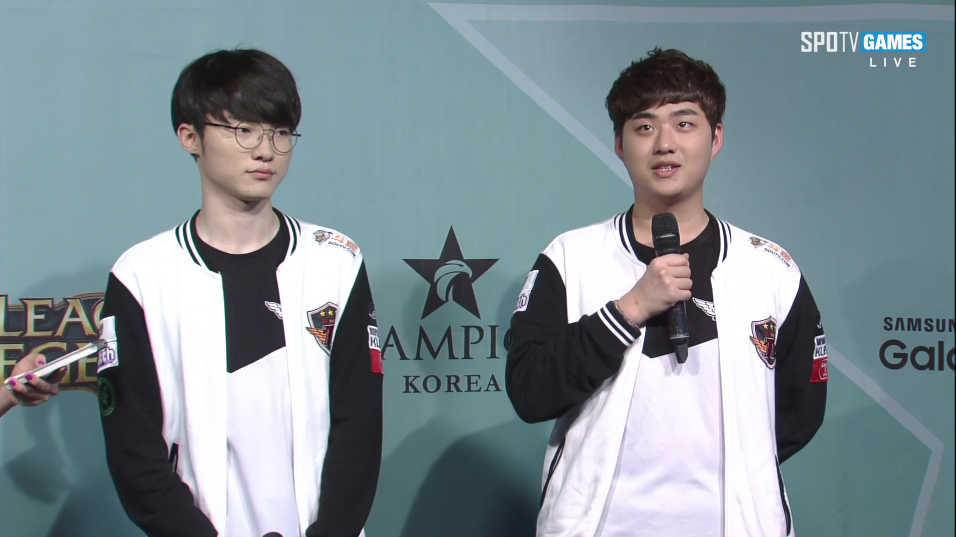 SK Telecom T1 continued their ascent through the LCK playoff gauntlet with a flawless 3-0 victory over Samsung Galaxy.

Looking back in form after their dominating win over the Afreeca Freecs in the first round of playoffs, SKT moved into tonight’s match with momentum. Although they had not beaten Samsung once during the regular season, SKT still looked to be tonight’s favorites.

Lee “Faker” Sang-hyeok showed any remaining naysayers why SKT was considered the favorites with a dominating performance in game one. On the Lucian, his champion of choice as of late, Faker completely manhandled Samsung mid laner Lee “Crown” Min-ho.

While the rest of the map was relatively quiet, down in the mid lane was the Faker show. Solo killing Crown twice, Faker had completely shut down his lane opponent. SKT used Faker’s massive lead to control the neutral objectives. Samsung couldn’t even think to fight SKT for a dragon with Crown so far behind.

Finding yet another solo kill onto Crown, Faker opened up the Baron to SKT. Samsung, knowing that this Baron determined their fate, went for a last ditch teamfight but were far too behind. SKT easily cleaned up the rest of Samsung to end the game.

Feeling very confident after his performance on Lucian, Faker decided to take a risk and picked an assassin in Fizz. Samsung, determined to not let the Fizz snowball, played the beginning of game two very safe.

This safe play worked out for Samsung. Letting their bot lane accrue a gold lead, Samsung slowly started to take control of the game, finding major objectives like the Baron.

But unfortunately for Samsung, they couldn’t close out the game. With seemingly pinpoint accuracy, Faker in the late game assassinated Crown with Fizz’s Chum the Waters. And once Crown was slain, SKT could slowly take back the game, eventually earning a comeback victory.

Swapping out three of their five players in game three, Samsung looked desperate. While Samsung had hoped one of these new players would turn the series around in their favor, the opposite occurred.

Losing his life by leaping into the enemy turret as Tristana, Lee “Stitch” Seung-ju had thrown away any semblance of control he had in the bot lane.

Now able to pinpoint a clear weakness in Samsung, SKT attacked the bot lane relentlessly, securing a huge lead in the process. Unable to fight back, Samsung slowly died to SKT, who lost not a single turret.

SKT now move forward to the semifinals where they will play old rivals KT Rolster on Aug 19.