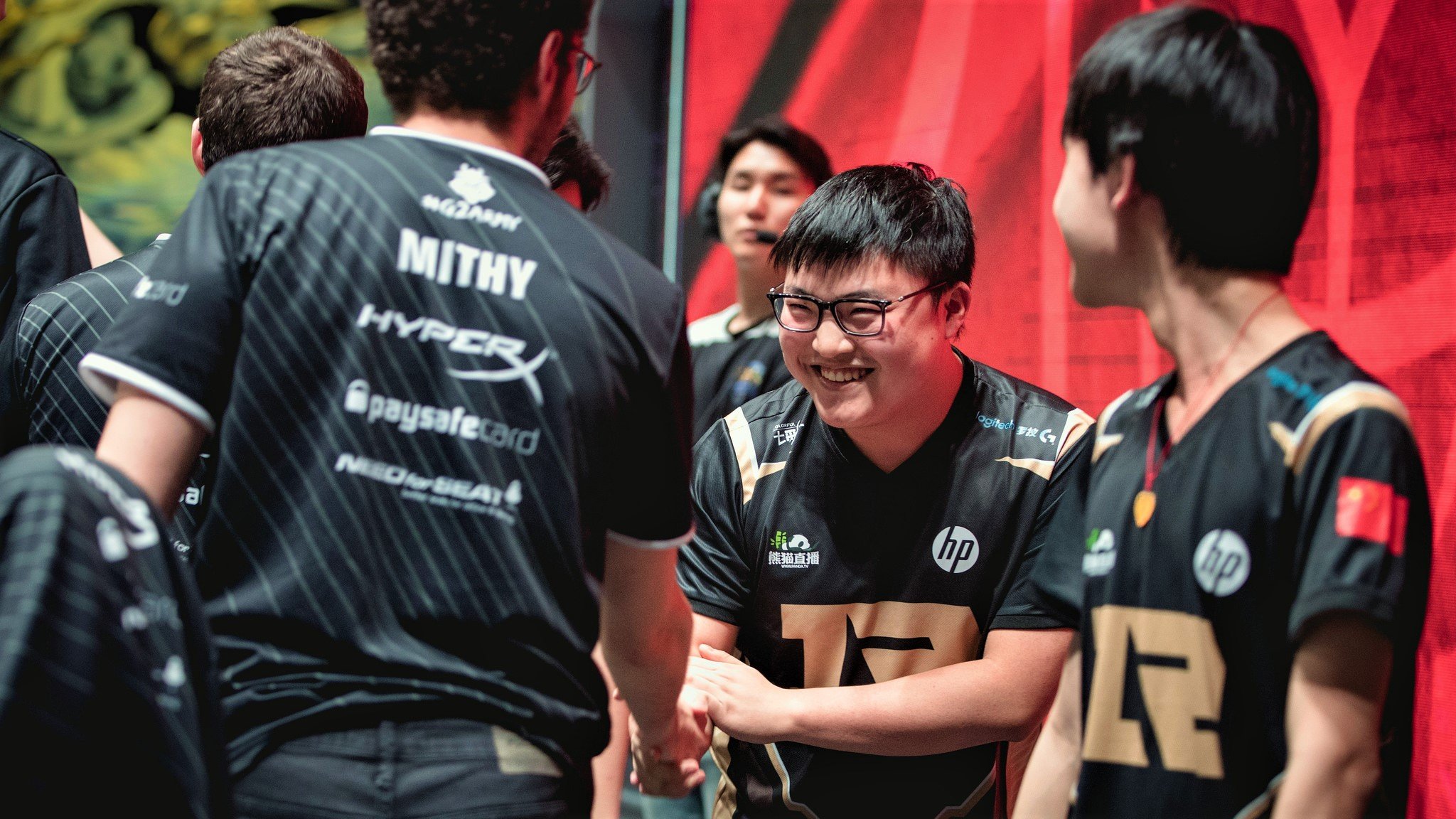 Coming into Worlds, SK Telecom T1, Longzhu Gaming, Samsung Galaxy, and EDward Gaming were the teams being praised to have the best chances at walking away with the Summoner’s Cup.

To the pleasant surprise of the Chinese home crowd at Worlds, however, one team has stepped up to play consistently better than all of them—Royal Never Give Up.

The LPL as a region had a rough summer. It seemed like the top teams were only skating by because of a lack of competition, and every other major region heading to Worlds was either coming off a hot streak or had at least one superstar team with a ton of hype.

From the LCK, it was Longzhu walking in right after overthrowing SKT for the LCK crown. In EU, all eyes were on Fnatic, a team that pulled out a miracle run in the regional qualifiers to secure their spot on the international stage and then went on to completely dominate the play-in stage. NA had TSM, and Vietnam’s GIGABYTE Marines always generate excitement thanks to their seemingly crazy methods.

What did the LPL have, though? After their dumpster fire of a split, EDG seemed like their only hope. They are the region’s first seed, they had just won the Summer Split, and they have a history of defeating the LCK on the international stage. Team WE, the region’s third seed, turned some heads at 2017 MSI, but this was their first appearance at Worlds in five years.

The team no one was talking about, though, was RNG, and surprisingly, they might just be the LPL’s best shot at the title.

Too early to tell

There were three teams sitting at 3-0 after the first week of Groups—SKT, Longzhu, and RNG. Most of SKT’s games were close calls, even against Cloud9 and ahq e-Sports Club—teams that SKT has no business losing to as three-time world champions. Longzhu came breathtakingly close to falling to the NA LCS’ Immortals. RNG, on the other hand, decidedly won all three of their games, even though their competition was stiff.

They defeated MSI runners-up G2 Esports and Samsung Galaxy of the LCK in landslides, going 13-5 and 11-0 in kills respectively.

Thanks to those games, RNG looks more dominant than any other favorite at Worlds. The key word, though, is “looks.” We can’t be sure if they actually are the most dominant team, because we’ve only seen three best-of-ones from them. Tonight, they go up against Group C yet again in the second half of the group stage, and they’ll need to prove that they’re actually as good as they looked during the first week.

Most of the concern here derives from the shortcomings of the other teams in their group. Despite G2’s pedigree and the fact that SSG is from the LCK, often referred to as the motherland of all competitive League of Legends, both teams didn’t play well at all. On one hand, you could say that RNG dramatically outplayed them, but the reality of the situation is that G2 and SSG both slipped up quite a bit, and that’s not something that RNG can rely on.

Of course, that doesn’t mean that RNG won their games simply because G2 and SSG fell short. Make no mistake, they played extremely well, but it’s hard to gauge exactly how they hold up against Longzhu and SKT when their competition is playing so terribly against them.

Cannonballs and the mid lane matchup

RNG does something that most other teams don’t do, especially here at Worlds. They are perfectly keen to give up objectives to the enemy team for something as simple as vision control. Li “Xiaohu” Yuan Hao, the all-Chinese squad’s star mid laner, always seems to win his lane, even when both side lanes seem to falter, and there are two explanations for this. Firstly, he’s very good, and very good players tend to win their lanes, obviously. That doesn’t always work, though. Even Lee “Faker” Sang-hyeok loses his lane occasionally, despite being the best player in the world.

The second and less obvious reason is the fact that RNG values vision and wave control in the mid lane above almost anything else. The team will actually sacrifice securing first tower by letting the enemy push through a side lane if it means they can gain control over the minion waves and vision hotspots around mid lane in the river. Xiaohu’s map awareness is stellar, and if he can use this vision and lane control, he almost never gets caught out and scales ahead of the enemy mid laner in just about every game.

Then, he can roam to the side lanes to force away the enemy with his sheer presence, allowing his team to either farm back any deficit they find themselves in, make a pick, or take an objective. This has been one of the strategies employed the most by RNG at Worlds, and it has worked incredibly well.

The second strategy lies within their team comp, and it’s one that fans have dubbed the cannonball comp. The cannonball comp has been used a lot by the LPL as a region over the summer, and it has come into full effect at Worlds as well. It starts out with two or more tanks with ham-fisted hard engages. Big, heavy-hitting crowd control abilities are put on display, and typically, you want them to stack together well. Galio and Jarvan make up one of the best combos, but RNG also pulled out the Sejuani and Maokai combo against G2.

In any other comp with two tanks, at least one of the tanks would glue themselves to the ADC or mid laner and peel, but in a cannonball comp, both tanks dive head first into the fight, leaving the backline exposed at the expense of dishing out so much crowd control on the enemy frontline that they couldn’t get through to RNG’s backline even if they tried. The only reason this comp works so well right now is the power of the Ardent Censer.

A single Janna or Lulu is all that it takes to properly protect the ADC without needing a tank and their crowd control, and the ADC is almost always a hyper carry like Tristana, Twitch, or Kog’Maw. In this comp, a long range control mage typically works the best, but Xiaohu proved that it also works well with Jayce in their game against G2. RNG didn’t use the cannonball comp in their first game against 1907 Fenerbahçe, but it’s safe to assume we’ll see it more tonight.

RNG plays again tonight at 12am ET/12pm CST against G2, where they’ll use the cannonball comp and unrivaled mid lane priority to prove to the world that they’re here to win it all.