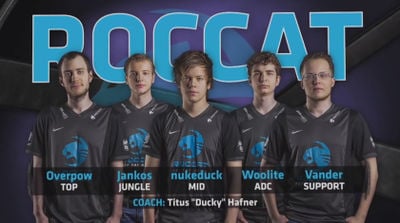 That word is used a lot in professional League of Legends. Many players and teams are hyped up by the community with people saying that they have potential to be great. The problem is many times those players and teams never live up to their “potential”.

Roccat came into the 2015 EU LCS Spring Split off the additions of Woolite as ADC and Nukeduck as Mid. Meanwhile Overpow made the move from mid to top lane. Nukeduck and Woolite were both seen as improvements over Overpow and Celaver with Nukeduck being a former member of LemonDogs and Woolite being the lone bright spot in the last place Copenhagen Wolves. While Overpow wasn’t a natural top laner people thought he would handle his own. Of course they would also still have Jankos who was considered to be one of the top Junglers in the west and VandeR who while not one of the best supports in EU was definitely not the worst.

Roccat had just finished 4th in the 2014 EU LCS Summer Split so with these new roster changes the hopes for them were top 3 or bust. Roccat started off the split 1-3 in the first two weeks, but had one of the tougher opening schedules facing and losing to the 3 teams that went to Worlds for EU. After the bad start to the season Roccat was never able to get their mojo going. They had a brief glimpse of what people thought they could be during week 3 where they went 2-0. After that though they only won 3 games in their final 12 games.

All the roster changes that Roccat made during the off season weren’t paying off when it mattered. Woolite, who is a great mechanical player had problems all season of getting caught in key situations which resulted in Roccat loses. Nukeduck who is remembered for his assassin play during Season 3 never played at the same level. Overpow also didn’t adjust to his move to the top lane.

Roccat finished 8th in the Spring Split and this resulted in them playing in the Summer Promotion Tournament.  Before the Summer Promotion they replaced their coach Ducky with the former MYM coach YamatoCannon. They were able to 3-0 Copenhagen Wolves Academy and secured their spot in the Summer Split. They now have one more chance at making Worlds this year. Since they didn’t earn any championship points in the Spring Split they have to finish in a top spot to get a spot in the Regional Qualifiers. With the addition of Origen to the LCS and the top teams only getting better the road ahead does not look to be an easy one for Roccat.