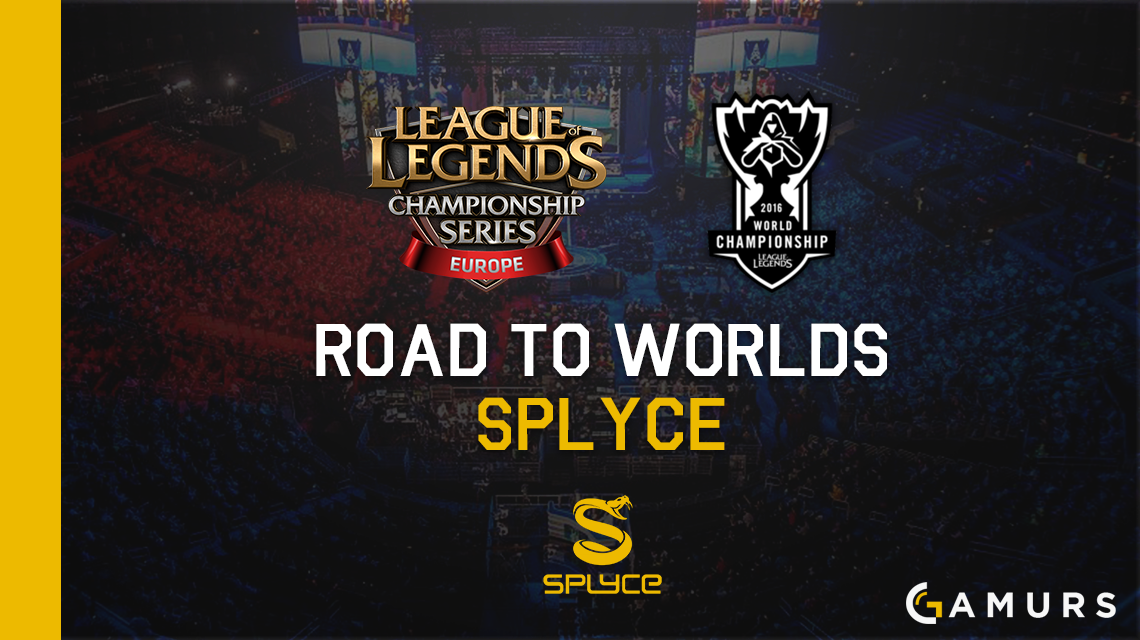 A GAMURS exclusive series, taking a look at the 16 teams going to Worlds from the beginning of their qualification and see just how their road to worlds went. Today, we look at Splyce, of the European LCS.

Picture it if you will. Oct. 29, 2015, The North American “Team Dignitas” were required to sell one of their teams due to Riot’s rule on multiple teams throughout the LCS. This led to the sale of Team Dignitas EU to Follow Esports. Their goal? To show you everything that is happening in esports, in both NA and EU, is a far cry to the ambitions of most teams: to get to Worlds.

The starting lineup consisted of Martin “Wunder” Hansen in the top lane, Jonas “Trashy” Anderson in the jungle, Chres “Sencux” Laursen in the mid lane, Kasper ‘Kobbe’ Kobburup as the AD Carry and Nicolai ‘Nisbeth’ Nisbeth as support. All but one of these starting players have remained on the team; Nisbeth is the only player to be replaced by Mihael “Mikyx” Mehle in the support role.

As we began a new season and the Spring Split dawned, Follow Esports rebranded into Splyce on Dec. 2, 2016.

With the European LCS still using the best-of-one format, the matches were quick and fast for a Splyce team just trying to find their footing. For the recently promoted challenger team, it would be a difficult start into the European LCS, with losses being registered in both games against Unicorns of Love and Elements in the first week.

Splyce truly was given a taste of things to come moving forward into their debut with only Trashy and Nisbeth having any former experience in the EU LCS, when Trashy was a part of Enemy Esports in the previous 2015 Summer Split and Nisbeth was in the 2015 Spring Split with Meetyourmakers to provide any advice to their rookie team what life in the EU LCS would be like.

It wouldn’t be until week two when Splyce would register their first LCS win against ROCCAT, from their fourth game overall in the European LCS, which would then lead to a second successive victory over Giants Gaming. The team would then see a slump in its form over the weeks, picking up three wins against Giants Gaming in week five, Elements in week eight and even more impressively, Fnatic in week six.

All in all, Splyce ended their first ever split in the EU LCS in a disappointing eighth place, one win away from a potential saving grace that would have kept them from going into the Summer Promotion tournament where Roccat (ninth) and Giants Gaming (10th) would join the Copenhagen Wolves and Team Huma from the EU Challenger Series to try and slither their way back into the EU LCS and be a part of the Summer Split.

Splyce would have to fight for their chance to rejoin the EU LCS, having to play against fellow former EU LCS organization Giants Gaming. The Giants would take Splyce into the series with a first game win, but Splyce then clawed back, taking game two to tie up the series. Giants would then take the third game, putting Splyce on the brink of a potential crash from the EU LCS a few months after its creation, but it was not meant to be, as Spylce won the fourth and fifth games impressively to rejoin the EU LCS.

This would mean the end of Nisbeth, however, who would be benched for the upcoming Summer Split, with Mikyx taking over as main support. This was the first and only change that Splyce would make all year to their roster, and of course, would be the start of greater things to come for the organization.

With Riot bringing in the best-of-two format for the start of the Summer Split, many fans of the EU LCS were quick to cast aside any thoughts of Splyce surviving the EU LCS; with so many changes occurring and the top teams gaining and losing top players, Splyce were underdogs in every sense of the word.

Splyce started off well, taking a draw from Team Vitality and Roccat in the first week to register points on the board. A much better start from the previous split, but the real challenge was yet to come.

Week two grabbed Splyce’s first win over the newly formed FC Schalke 04, but were powerless when facing off against the league Leaders G2 Esports. The same effect occurred in week three, gaining a win and a loss. This trend continued with Splyce showing signs of improvement, however, in what can only be described as a miracle of the European LCS, week six hit and Splyce slowly started to gain massive wins, even taking points away from G2 when they had lost effortlessly only weeks before. Splyce went on to beat Fnatic, then H2k-Gaming and Origen to see them overtake the other teams and leapfrog into second place at the end of the Summer Split to show a convincing team display and improvement that could not be matched.

It was all down to a recent path change that saw Splyce spring into action, assisting their playstyle and helping them dominate and begin to prove that people should pay more attention to the most unlikely contenders; some even decreed the organization as the second Origen, but they still had a lot to prove.

The fall and the rise of the Snake

What a change a few months made. Splyce, an organization that was fighting to keep their place in the EU LCS as a whole, a team which had no other aspirations in the league other than staying in it, were suddenly thrown into the spotlight as genuine contenders to take Europe’s number one seed into Worlds, but they had two fights ahead of them to even get a shot at it first.

H2k-Gaming would be the ones to first stand in their way, but after defeating them, it was not meant to be, as G2 would defeat Splyce in the Summer Split playoffs. This set up their chance to go to Worlds in the first year of the organization’s League of Legends history; to perform on the global stage this early in the career of so much young talent, only G2 Esports stood in their way.

G2 was too powerful, however, taking the series 3-1 and with Splyce’s lackluster Championship points amount due to their recent Summer Promotion fight leading to no points in the Spring Split, H2k-Gaming, the team they beat in the semifinals, were the ones to take the second seed and join G2 as one of EU’s representatives. Dreams were beginning to crash of a possible appearance in North America, but Splyce still had a chance, the Regional Qualifiers, to take that all important third seed. And only one team stood in their way…

Unicorns of Love, coming from the very first round, were also, like Splyce, looking for their first Worlds appearance. But unlike Splyce, they had been at this point before, a regional qualifying third round, having lost out to Origen the previous split. It was now Splyce standing in their way.

After what could only be described as a five-game thriller, Splyce, through all the doubt and all the pressure, were the ones to see off the Unicorns of Love. After UoL seemed poised to win, if not for throwing their games and giving Splyce the chance to get back into it, allowed Splyce to take that final spot and head into Worlds 2016 as Europe’s third seed.

And that, ladies and gentlemen, is Splyce’s “Road to Worlds!”

As we head into Worlds 2016 in North America, we ask you guys which team you are supporting in the competition? How far do you think they can go? Let us know on twitter @GAMURScom