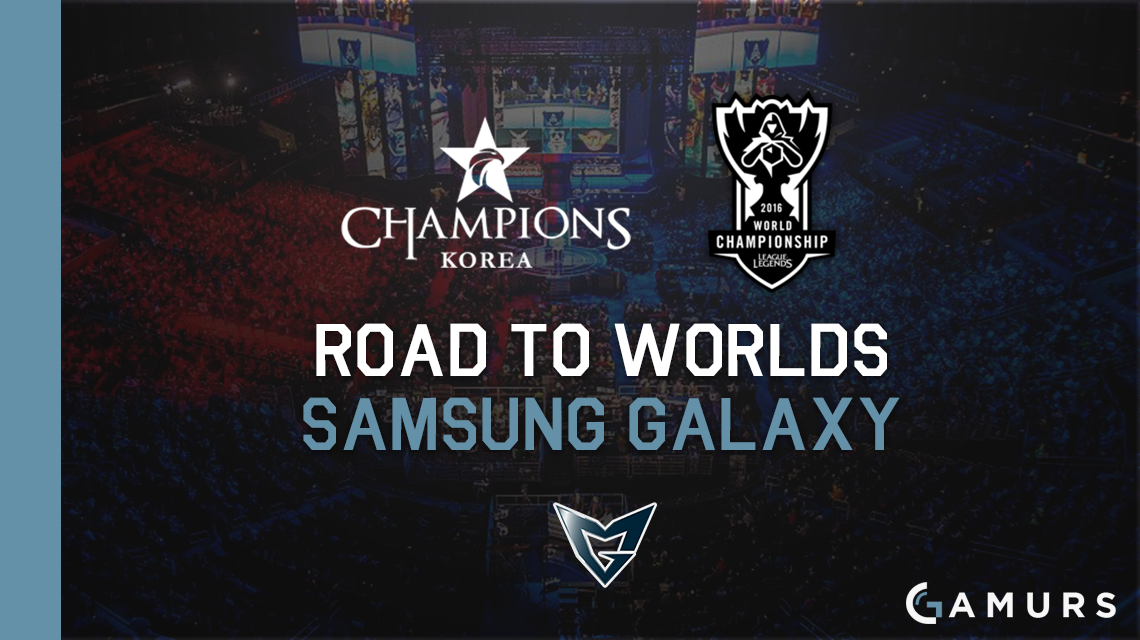 A GAMURS exclusive series, taking a look at the 16 teams going to Worlds from the beginning of their qualification and see just how their road to worlds went. Today, we look at Samsung Galaxy of the LCK.

To many who have the third season of the LCS still fresh in the mind, the words Samsung White and Blue still ring to those who saw the utter domination of the organization on both the regional and worlds circuit. How is it then, that the org would become what it is today, just plain old Samsung Galaxy.

Samsung Galaxy (SSG) competed in the 2015 LoL KeSPA Cup as part of their pre-season where they were placed against Ever in the first round. To the surprise of many, Samsung was quickly dispatched 2-0. Afterward, Samsung saw their jungler, mid laner, ADC and support all leave the team.

Their current team that would see them get to Worlds is made up of Lee “CuVee” Seong-jun, Kang “Ambition” Chan-youg, Lee “Crown” Min-ho, Park “Ruler” Jae-hyuk and Kwon “Wraith” Ji-min in the top, jungle, mid, ADC and support roles respectfully.

With the change in roster, SSG had a lot to prove if they had any shot of competing in an already competitive LCK league and the prospect of even making playoffs would suffice any fans expectations.

With a competitive atmosphere in the LCK, anything and everything was possible with so many outcomes, but the thoughts were the same. SK Telecom T1 were reigning world champions; they were the team to beat, everything else was a bonus. Samsung were no longer favorites of anything, their goal was to just survive and not get relegated.

The Korean LCS, at this time, used the NA style we have grown accustomed too, best-of-three series, before it became a norm in the NA scene. SSG started impressively in week one, snagging two wins out of two against Kongdoo Monster and Afreeca Freecs. Even in week two, although they lost against SKT, which was too be expected, they still had nine out of a possible 12 points on the board, finishing 3-1.

However, it was not meant to be and as the weeks progressed and SSG lost many high profile games, they ended the split 10-8, only missing out in the top five by two fewer wins in their best-of-three series and not reaching Spring playoffs for a chance to go to the Mid-Season Invitational. It was back to the drawing board for SSG.

This would leave SSG with 10 circuit points and faced with a daunting prospect for any of the team looking to try and return the organization to Worlds territory with Rox Tigers, SKT, and KT Rolster all beefing up their rosters impressively.

It was the summer of change in the LCK. SK Telecom T1 had just returned from a successful Mid-Season Invitational, winning the entire tournament and were the favorites to take the top spot once again.

SSG were looking to get off to a flying start once again, ending the first two weeks of play at the top of the board, ahead of SKT. The weeks proceeding would see SSG slowly slip down the table until they were settled into fourth place, having a shot at the top seed, having a shot in the summer playoffs for the LCK but the ever daunting task of such heavyweights would make it a true test of grit and character.

They would start in the first round against Afreeca Freecs and pass them aside like nobody’s business, the first hurdle past but the true test, a fight against KT-Rolster. But it would not be the dream run that many SSG fans were hoping for as they were demolished in humiliating fashion, outclassed and outplayed 3-0 in the best-of-five, leading to Samsung holding on and hoping the 40 championship points they aquired would be enough to keep them in with a shot, as they headed from first seed contenders to the LCK regional qualifiers.

Climbing back to glory

I just want to make this clear to you all, to show you the scale of the “big three” of the LCK. Rox Tigers beat KT Rolster to the top seed, but they already had 70 circuit points. SKT, going through as the second seed, had 160 circuit points. KT Rolster had 140 circuit points and would meet whoever made it to the final. SSG? 50. Yes. 50. Nearly 100 circuit points less then KT Rolster with Afreeca Freecs and Jin Air Green both on 30 to fight it out in the first round.

The winner would be Afreeca Freecs, a team SSG were used to beating by now, but even with a small fight back in the best-of-five series, SSG took a 3-1 deficit over their opposing team. This would set up SSG’s monumental task against KT Rolster, the team that had only recently beat them 3-0 in Summer Playoffs, the favourites to continue, not even some SSG fans had hoped for a miracle.

But of course, we all know how this story goes.

KT Rolster were stunned in the first game by a dominant SSG, losing in just under 35 minutes by a 15k+ gold lead and 20 kills to their minuscule one, a statement from SSG in this first game.

However, KT answered back in the second game, completely controlling all objectives and team fights to dominate a lackluster SSG that we had seen in the previous game.

KT continued to dominate a shaky looking SSG in the third game to set up their Worlds spot, what both these teams were craving and what KT felt was theirs to have.

However, SSG were able to take the fourth game, regaining their form with one last shot, both teams sweating at the opportunity. In a battle between the favourites and the underdogs, it would be SSG who pulled through, fought hard and made KT Rolster look like the underdogs with impressive grit. The favourites were defeated, and SSG swiped that third seed spot and celebrated jubulessly.

And that, ladies and gentlemen, is Samsung Galaxy’s “Road to Worlds!”