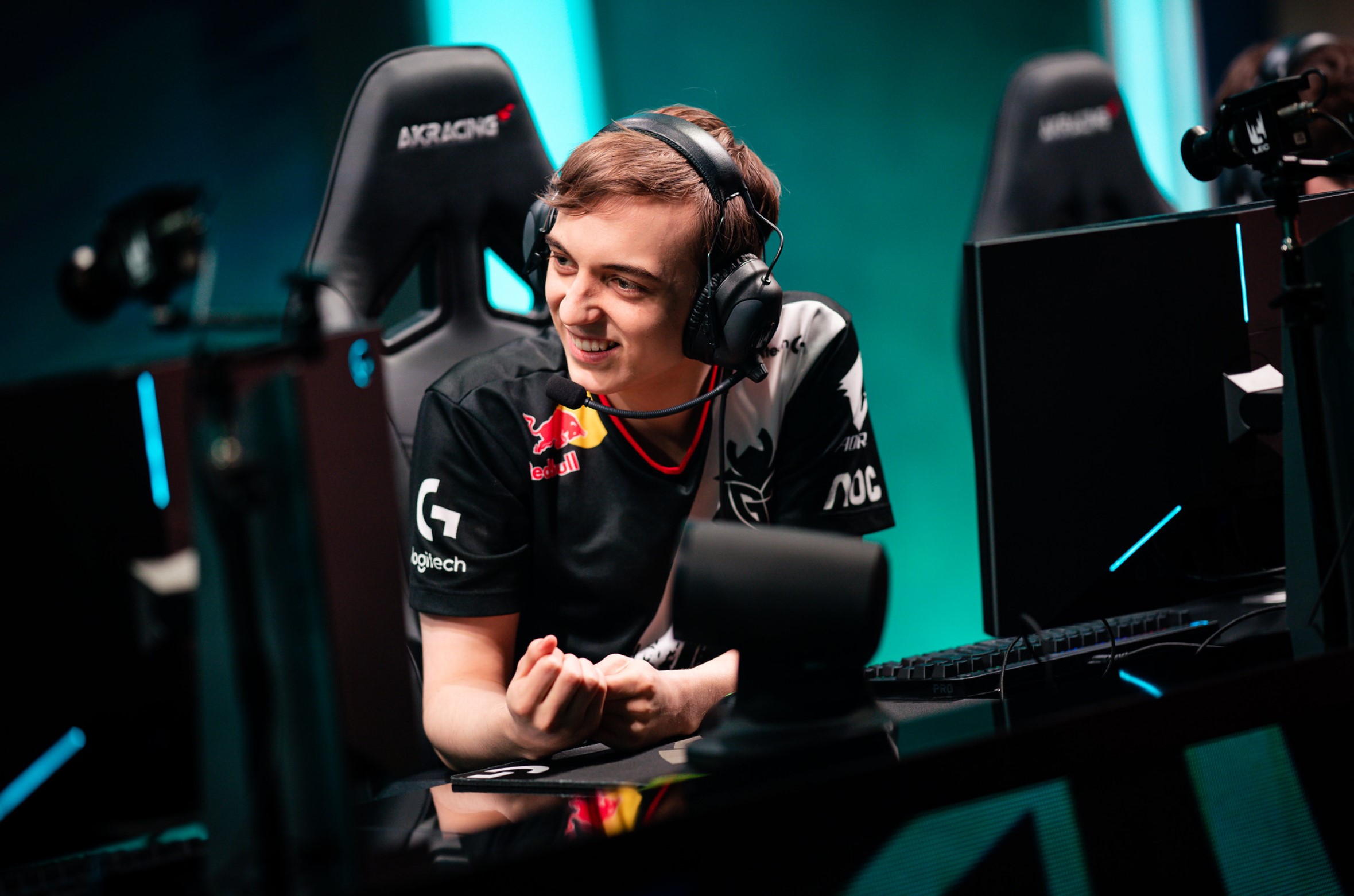 We’re at the halfway point of this year’s LEC Spring Split with each of the teams in the league completing their first round robin of games. With one team undefeated and another winless, the LEC is beginning to pick out which squads are serious playoff contenders. And as we move into the second round robin of the Spring Split, there are still countless scenarios in which the playoff bracket could be shaken up.

This week, six of the 10 teams in the league moved up or down our rankings, with squads like G2 Esports and Team Vitality trending upwards and others like Fnatic sliding down. Three losses in their last four games after a 6-0 start is really hurting their stock.

Still, each team in the league has nine games left on the schedule, and over the next four weeks, every one of them will have the chance to make their case for a seed in the playoff bracket. No one is mathematically eliminated yet and the league still has plenty of room to grow in 2022, especially considering the season extends well beyond competitions in early spring.

With that in mind, here are our LEC power rankings halfway through the 2022 Spring Split.

Getting used to each other: SK Gaming, Astralis

For the third week in a row, SK Gaming and Astralis sit at the bottom of our League of Legends writers’ power rankings. Following the performances they put up this past week, it’s getting harder to believe in a miracle run for either of these organizations.

Both of these rosters actually faced each other this past weekend and it was one hell of a fiesta from the first minute onward. One team had to win this game, though. After persevering through a relatively disastrous early and mid game, SK’s rookie mid laner Sertuss hit a huge four-man shockwave that snowballed into his team’s second win of the season.

But still, things are looking dire for whenever these two squads aren’t facing each other. Whether it’s SK’s league-worst -2,006 gold difference at 15 minutes or Astralis’ various objective control rates all sitting under 30 percent, according to Oracle’s Elixir, change is surely coming if either org wants to see some type of upturn in the coming months.

Halfway through the 2022 LEC Spring Split, the placement of the 10 teams in the standings is quickly becoming more secure. At the top are destructive forces like Rogue and Fnatic that continue to reign supreme week after week, while the other side of the leaderboard features teams such as Team BDS and Excel Esports that, while they have their moments, are looking increasingly unlikely to pose any major threat.

For Excel, this past weekend seemed to place them in a new light following a victory over Fnatic, emphasized by consistent pressure across the board that never ceased. This was the first time in four weeks that Excel demonstrated this type of gameplay against a non-low ranking team, leaving us interested in what’s to come for the team but worried about how much time there is left to turn their luck around. Therefore, Excel move up one spot, but shakily.

Unfortunately for Team BDS, attempts at closing out games after securing leads have proven completely unsuccessful. When Team BDS had MAD Lions all but beaten, they handed over their massive lead through uncoordinated teamfights that looked as if the team had completely given up. At 31 minutes, Team BDS had a 5,000 gold advantage over the 2021 LEC champions with four towers on them as well. They then lost this lead in its entirety within five minutes. With only four weeks left in the split, not knowing what to do when maintaining a surprising lead is a one-way road to further losses.

MAD Lions tried to bamboozle Fnatic with their draft and took Zeri, but it wasn’t enough. Credit the Lions for experimenting a bit and pushing out of their new players’ comfort zones in best-of-ones, however. Yes, the standings only have MAD a game out of seventh, but you can’t trust the table right now. Barring catastrophe, they will make the playoffs. They still have an elite jungler in Elyoya and a lot of experience with “slow” regular seasons and turning it on for best-of-fives—and games like this with strange drafts are part of the reason why. They are versatile and will only get better, even if it’s by taking two steps forward and one step back at times.

Misfits have settled into the respectable “gatekeeper” spot in the standings, beating teams below them and losing to more talented rosters. But all of a sudden, with Excel creeping up in the standings and Vitality in midseason form, sixth place is far from a guarantee in a crowded middle of the pack in the LEC. I’ll keep it brief on Vetheo this time around, but he’s being mentioned again for good reason. The 19-year-old French mid laner has continued his tremendous sophomore campaign, racking up a league-leading fifth player of the game award. Those only mean so much, sure, but for those keeping score at home, Misfits also have five wins. Those awards don’t go to anyone on the losing team. All that being said, after starting the split 2-1, it’s been three straight 1-1 weeks for the rabbits, including a win over pre-Mikyx Excel. This is where we learn what Misfits are made of: Their next four games are against BDS, Rogue, Excel, and MAD Lions. The bare minimum is a 2-2 record, but a 3-1 stretch would silence a lot of doubters.

Rogue have a bit of a stranglehold on the LEC right now, but these three teams are all placed one tier beneath them for good reason: They’re all within striking distance of first place. With a refreshed round robin on the horizon, Fnatic, G2, and Vitality all have the chance to bring themselves back into the race for the Spring Split’s No. 1 seed.

At 6-3, Fnatic and G2 are the closest to breaking into the top tier of the LEC, while Vitality seem to finally be hitting their stride after a disastrous start to the year. Vitality, in particular, have won five of their last six games and are starting to look a lot more like the team we thought they would be in the preseason than the team that showed up in week one. Even Perkz himself said that Vitality would be 8-1 if they went 3-0 instead of 0-3 during the first week of the season—and that math checks out for us.

All aboard the Rogue train. Next stop: the top of Europe.

The undefeated Rogue consolidated their position as the best team in Europe after finishing the first round robin with nine straight victories. Each stop along the way only saw Rogue gain speed, distancing themselves from the rest of the LEC’s teams.

If you look at the KDA statistics of the last week of competition, you’ll find all of the members of Rogue in the top 10, according to Oracle’s Elixir. But what the numbers don’t show is the harmony and cohesion that Rogue’s players demonstrate in-game. In a short amount of time, they’ve managed to combine their individual talents to create a machine that passes over everything in its path, be it Vitality, Fnatic, or G2.

And the newcomers to the team have been at the front of the line in pulling their team to victory. Comp and Malrang, the duo that for many seemed to be a downgrade from the players who filled their roles in previous seasons, have proven to be an unstoppable force. Malrang has led the way for some of the team’s most spectacular plays and Comp was there most of the time to close them out with finesse and skill. And if Odoamne and Larssen are the rails that direct the team toward their common goal, Trymbi is the one who guides his team into action, as can also be heard in the team’s voice comms.

With the second round starting today, it’s unclear if any LEC team can put a stop to Rogue. That arduous task will first fall into Astralis’ hands, a team that’s the direct opposite of the first-place squad.