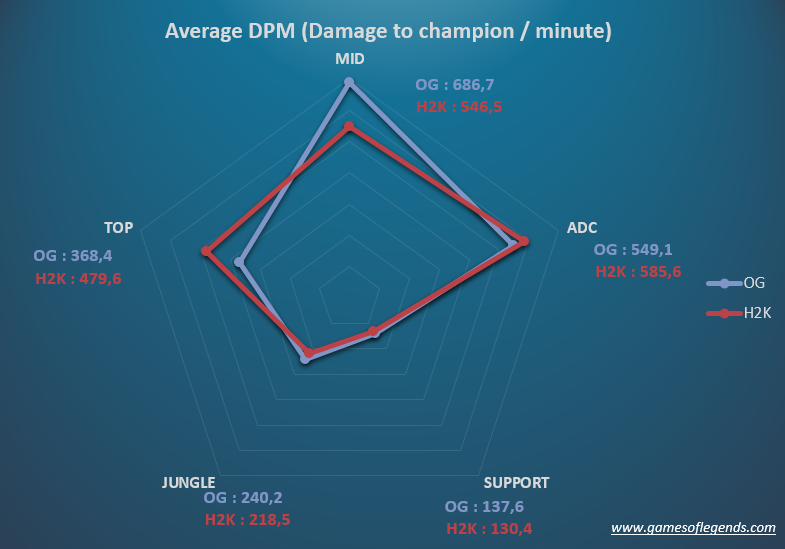 Here are some stats compilation before the LCS semifinals. Stats are from Summer Split regular season (quarterfinals are not included) and comes from www.gamesoflegends.com.

During Summer Split, Origen won 2 times against H2K. The last game between the 2 teams was kind of a close game. Origen pushing his advantage of a 40min nashor badly protected by H2K. Here is the Gold graph of the last game (H2K are blue, OG are red) :

With H2K good performance in quarterfinals and the scenario of their last opposition, I think we can expect some close game between the 2 teams. Still, Origen looks favorite.

The score between the 2 teams in Summer Split was 1-1, TiP winning the last one.

Interesting fact about CLG vision control, they have the worst WPM of NA LCS, but they have the best WC%, clearing 37.2% of opponent’s wards.

Well, it’s difficult to draw any conclusion from Fnatic’s perfect split stats. They have shown us every lane can carry a game, and we can see that on their damage chart.

During their last game, despite UoL getting the first blood and putting down Huni’s Ryze at 0/2, they didn’t manage to control him.

I already wrote before about TSM’s damage being mid-centric, but they have shown us during quarterfinals that they can adapt their playstyle and champion pool. During quarterfinals, Bjergsen played Lulu (first time this season) and Orianna, playing a more supportive role, and his damage share went down to 30% from 42.5% during the regular season. Maybe it was just an anti-Gravity strategy, but I’m looking forwards their picks versus Team Liquid.

Regarding Team Liquid’s damage, and specifically mid lane, Fenix didn’t played poke champion a lot (only Jayce 2 times), so considering is champion pool, his DPM is quite good.

Others stats worth noticing for Team Liquid :