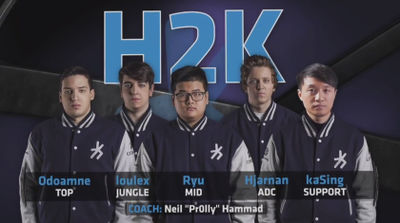 Summer Split EU LCS is about to end so I would like to present you my analize of teamcompositions. I will start with most interesting for me team to analyze in the EU LCS – H2K.

It has been interesting to watch them grow in 2015. After securing an LCS spot they lost their main star – Febiven and it was said that H2K would be defending from relegation but they found perfect replacement in Ryu. For me as polish citizen – Ryu, who was first foreign player in Roccat ( sub in IEM Cologne) was very interesting choice for H2K. To be honest Ryu didn’t perform well in Cologne and a lot of polish people take not signing Ryu to Roccat with relief. Second change in H2K was kaSing who made extraordinary entrance with 0-0-8 stats on Thresh and start winning streak for 8 matches.

In theory H2K looks as very stable team. But let’s take a look how do they perform in Summer Split. I will start with winratio on diffrent champions:

We can see if only Hjarnan steps up on a hypercarry ADC then H2K is unstoppable. Having solid frontline and portion of shields make this swedish player real monster with 40/10/50 KDA. Great pair for him on botlane is Thresh who is one of the most flexible champion in League of Legends with both great engage and disengage and his priceless lantern for immobile Jinx. With a champion as adaptable as Thresh Odoamne can choose either Rumble, who brings a powerful zoning ultimate or the formidable teamfighter Gnar. Upon adding Gragas with one the best disengages in game or Rek’Sai with great map control and solid frontline tankiness then can provide Hjarnan very safe positions in teamfights. This flexibity allows Ryu to choose either „suport” mid-lane picks like Orianna or Lulu, which role is to defend ADC or assassins like Fizz, Ahri and LeBlanc or even poke champions like Jayce.

But let’s see what happens when H2K don’t get their comfort picks and they play other teamcomps. Once again let’s start with winratio:

What’s most significant for H2K is that they lost to last two teams in table it means CW and SK and almost last by that time Roccat. It’s hard to say if it’s lack of concetration but H2K even when have comfortable matchup, but other than hypercarry team composition, can’t execute it properly. But if H2K won without Jinx or Kalista it was always very much teamfight oriented setup like:

It’s said that H2K is strong and stable European team. They reminds me a bit SK Gaming from Spring Split – everybody knew what SK plays but nobody can stop them.  But when is SK now everybody see. Split is about to end and it looks like everybody learn how to play againt H2K by banning bot like Fnatic and Origen did or by banning jungle like Roccat. Maybe soon somebody else decided to ban out any other lane – mid is almost unbannable but 2-3 top bans are still possible especially with first pick. If H2K want not to follow SK path they must prepare better for playoffs. Last two weeks they end up with 1-3 score and in Bo5 scenario teams have more time to adapt to oponent and learn what to ban. Exactly that happend in 3rd spot match when SK won two first games against H2K and then lost 3 in row ending on 4th spot right behind H2K.

Last week would be very exciting for H2K. All European teams fight for 2nd spot because Fnatic is out of reach. It’s very important for playoffs because you have guarantee semifinals and 4th position. First match would be H2K versus Origen and would be crucial for the table. H2K have one win less and they must win this match if they want to reclaim their 2nd spot. As I wrote before very important is who has first pick in order to ban out and pick all comfort picks away from your oponent which is very popular strategy versus H2K. Luckily first pick is on H2K side. If they win then second matchday would be also extremly interesting. H2K will face Gambit with Gambit on first pick and Origen will play with Roccat. Both teams Roccat and Gambit have 7-9 winratio so far so we can consider this teams as equal and very unpredictable. This week will show if H2K is one trick pony and they can win only on their comfortable picks and hypercarry composition or they are very solid and experienced team who can adapt to situation very well.